The List 18th-Century Royal Palace at Caserta with the ...
Print

The monumental complex at Caserta, created by the Bourbon king Charles III in the mid-18th century to rival Versailles and the Royal Palace in Madrid, is exceptional for the way in which it brings together a magnificent palace with its park and gardens, as well as natural woodland, hunting lodges and a silk factory. It is an eloquent expression of the Enlightenment in material form, integrated into, rather than imposed on, its natural setting. 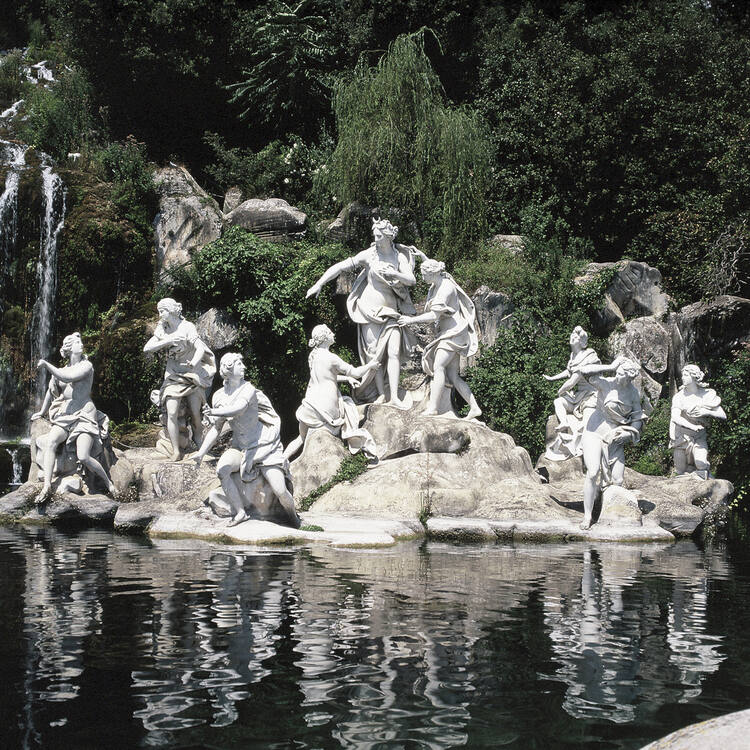 18th-Century Royal Palace at Caserta with the Park, the Aqueduct of Vanvitelli, and the San Leucio Complex © UNESCO

The extraordinary monumental complex of Caserta, in the north of Naples, was planned in the second half of the 18th century by the architect Luigi Vanvitelli, according to the wishes of Charles of Bourbon to rival Versailles and Madrid. It includes a sumptuous palace with a park, gardens and wooded area, as well as the Aqueduct Carolino and the industrial complex of San Leucio, built for the production of silk.

The Royal Palace is the centrepiece of the whole architectural composition and is located on a central axis which connects and unifies the entire complex. The portico and the stream of the fountains in the park which lead to the scenic backdrop of the waterfall, formed by the Aqueduct Carolino, are also situated along this axis.

With its four courtyards and three atriums, the Royal Palace is a great example of monumental structure built to be a magnificent palace for the royal family and its court and, at the same time, an administrative centre inspired by the model of Escorial in Spain.

The park is the latest of the great European gardens inspired by the creations of Versailles and the 16th century models of villas in Rome and Tuscany. The English Garden is one of the greatest, oldest and most important picturesque gardens created in Europe.

The main part of the San Leucio estate is the ancient hunting Lodge of the Belvedere, converted by King Ferdinando IV of Bourbon into a silk mill to create an idealistic community of workers, who were guaranteed homes, schools, medical care and all services. The huge building complex, set around the inner courtyards, became the symbol of a model society based on the value of work and equality.

The Aqueduct Carolino, with its imposing viaduct “Ponti della Valle” is a stunning work of engineering and provides an extraordinary infrastructure not only serving the palace, the gardens and the future capital of the kingdom, but also the mills, the ironworks and the manufacturing industries located along its path.

Criterion (i): The 18th century estate of Caserta is a unique creation of the spirit of the Enlightenment which was able to build buildings of great architectural value, well set in a natural landscape, according to a broad scale development plan.

Criterion (ii): The 18th century Royal Palace of Caserta with the park, the Aqueduct Carolino, and the complex of San Leucio are all important evidence of the interchange of human values, thanks to the broad scale of its original project for an ambitious new town, consisting of imposing buildings, gardens, streets and surrounding natural landscape according to an innovative concept of planning. This new configuration of the landscape has been realized through engineering works of exceptional historical interest, like the Aqueduct Carolino, which was created to connect and unify the entire complex.

Criterion (iii): The monumental complex of Caserta is an outstanding example of urban planning implemented by the Bourbon dynasty, according to Vitruvian principles of solidity, functionality and beauty in line with the neoclassical culture in vogue at the time.

Criterion (iv): The outstanding value of the industrial complex of Belvedere, planned to produce silk, derives from the idealistic principles underlying its original conception and management.

The site has good conditions of social-functional integrity because the Royal Palace and the Belvedere complex are recognized by the local community as a symbol of a historic period of development of the region; the Aqueduct Carolino retains its original utility serving not only royal properties but also surrounding areas.

The buildings have material-structural integrity because the later adjustments to interior spaces did not change the features of their architecture. The buildings and the gardens have been subject to scientific restoration and the surrounding area retains the principal features of the original landscape design.

The risks to the Royal Palace and park are the pressure of urban development in the surrounding landscape and the wear caused by the flow of visitors.

The risks to the San Leucio complex are urban development pressure in the surrounding landscape and the shortage of funds for maintenance, due to the lack of new uses for most of the building.

The risks to the Aqueduct Carolino are the transformation of the surrounding landscape due to urbanization and the shortage of funds for maintenance.

Even though the entire property has undergone conservation, the level of authenticity of the buildings and open spaces remains high. The original appearance is still well preserved and the inappropriate intrusions are limited to an acceptable minimum.

The restoration and the maintenance of the buildings and the gardens respect the original projects by Luigi Vanvitelli, his son Carlo, and Francesco Collecini, and retain the original material and structural consistency.

In particular, the Royal Palace and the park, the English Garden, the Bosco di San Silvestro and the Belvedere buildings are protected as monuments.

Any kind of intervention in this buffer zone needs the authorization by the competent authority (the Municipality and the Ministry of Cultural Heritage and Activities and Tourism through the local office, the Soprintendenza relevant for “Belle Arti e Paesaggio” in the provinces of Caserta and Benevento).

Responsibility for the management of state-owned assets has recently been transferred to the Museum of the Royal Palace of Caserta, an agency of the Ministry of Cultural Heritage and Activities and Tourism created in December 2014, to guarantee the conservation and enhancement of the property.

Parts of the Royal Palace complex are currently used by the school of Military Air Force but in December 2014 the Ministries of Culture and Defence have approved a program to move the school away by December 2020 and to reserve the entire Royal Palace for cultural and educational functions.

The Bosco di San Silvestro is run by volunteers of the World Wildlife Fund for Nature (WWF), who are preserving and keeping it open to the public as an "oasis" of flora and fauna.

The Municipality of Caserta manages the Belvedere buildings, where there is a museum of the royal rooms and of silk production.

play_arrow 18th-Century Royal Palace at Caserta with the Park, the ... (UNESCO/NHK)