Sousse was an important commercial and military port during the Aghlabid period (800–909) and is a typical example of a town dating from the first centuries of Islam. With its kasbah, ramparts, medina (with the Great Mosque), Bu Ftata Mosque and typical ribat (both a fort and a religious building), Sousse was part of a coastal defence system. 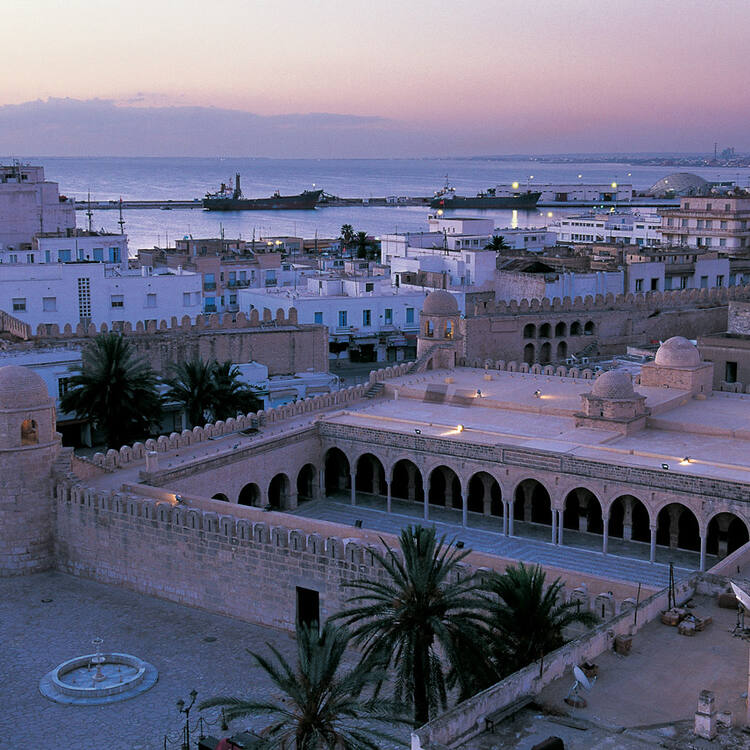 Located in the Tunisian Sahel, the Medina of Sousse constitutes a harmonious archaeological complex that reflects Arabo-Muslim urbanism applied to a coastal town exposed through its history to piracy and dangers from the sea. With the Medina of Monastir, it constitutes the unique prototype of military coastal architecture of the first centuries of Islam that has been passed down to us. Several monuments of the medina bear witness to this robust, ascetic and imposing architecture, notably the Ribat, the Great Mosque, the Bou Ftata Mosque, the Kasbah and the ramparts. The Ribat, both a fort and a religious building, is an eminent example of this type of construction. The Medina also comprises juxtaposed dwellings divided into quarters that separate the winding alleys and narrow paths, a fast disappearing type of layout threatened by modern life and the evolution of architectural techniques. It also contains an ensemble of unique monuments dating from Aghlabid and Fatimid times, enabling study of the evolution of Islamic art in its first period.

Criterion (iii): With the Ribat, the Kasbah, ramparts, Bou Ftata Mosque and the Great Mosque, the Medina of Sousse bears exceptional witness to the civilization of the first centuries of the Hegira. The Medina was conceived according to a regular plan with its meridian axis running from Bab el Kabli to the ribat and the ancient interior port, and its east-west axis running from Bab el Jedid to Bab el Gharbi. It constitutes a precocious and interesting example of an Islamic city.

Criterion (iv): The most ancient and best conserved of all, the Ribat of Sousse, is an outstanding example of this type of construction, with its rectangular enclosure flanked with towers and turrets, pierced with a single gate on the south, an inner courtyard rising over two levels with thirty-five cells opening onto it, a mosque on the southern side of the first storey, with its south-east facing tower, added in 821, serving as both a minaret and watch tower, from where signals from the Ribat could be transmitted to Monastir.

Criterion (v): The Medina of Sousse constitutes an outstanding example of Arabo-Muslim and Mediterranean architecture that reflects a particular traditional way of life. This typology, which has become vulnerable through the impact of irreversible socio-economic changes and modern life, constitutes a precious heritage that must be safeguarded and protected.

The boundaries of the property correspond to the surrounding wall of the town and include all the important attributes.

The historic urban ensemble of the town of Sousse has conserved, without major alteration, its urban fabric with its spatial morphology and its monumental, architectural and architectonic components.  However, new developments outside the boundaries threaten the visual integrity of this coastal fort.

Adaptation to new life styles and socio-cultural and economic demands as well as the restoration and renovation work carried out over the centuries have not affected nor perturbed its intrinsic functional and structural authenticity. However, new challenges arise when a balance between the function, the needs of the inhabitants, heritage questions and the need for new buildings, needs to be found Authenticity is particularly vulnerable due to inappropriate conservation and inadequate new constructions.

The Medina of Sousse benefits from three levels of national protection including a local and municipal protection system. In addition to the large number of monuments benefiting from specific listing as historic monuments (Kasbah, Great Mosque, Ribat, Soufra, Bou Ftata Mosque, etc.), the property is protected by Law 35-1994 concerning the protection of archaeological and historic heritage and traditional arts, by the Law concerning urban town planning and by the Municipal Order concerning construction permits inside the Medina of Sousse. A structure attached to the National Heritage Institute is permanently responsible for the safeguarding of the property and its management.  Control measures to reduce the impact of interventions on the historic monuments and that of new developments on the ensemble of the property should be introduced on a strictly permanent basis. Conservation interventions also need to be carefully and continuously controlled. The proposed buffer zone shall extend over 200 m beyond the ramparts and should be subject to constraints as regards adequate planning to preserve the visual integrity of the property.