Canterbury, in Kent, has been the seat of the spiritual head of the Church of England for nearly five centuries. Canterbury's other important monuments are the modest Church of St Martin, the oldest church in England; the ruins of the Abbey of St Augustine, a reminder of the saint's evangelizing role in the Heptarchy from 597; and Christ Church Cathedral, a breathtaking mixture of Romanesque and Perpendicular Gothic, where Archbishop Thomas Becket was murdered in 1170. 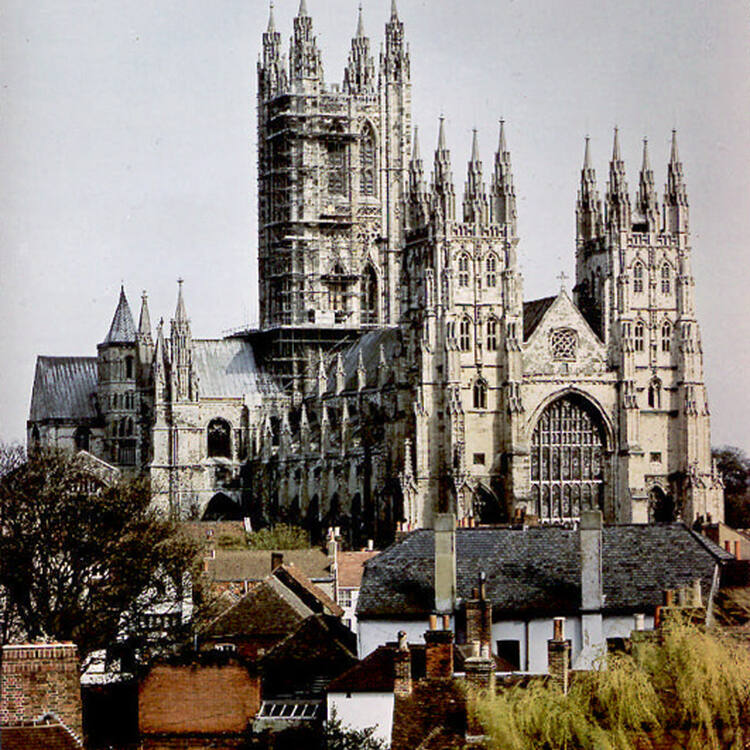 Christ Church Cathedral Canterbury in Kent, South East England, a breath-taking mixture of Romanesque and Gothic architecture, has been the seat of the spiritual head of the Church of England for nearly five centuries. Following the murder of Archbishop Thomas Becket in 1170 AD and his subsequent canonisation it became a place of pilgrimage. St Martin’s church and the ruins of St Augustine’s Abbey form the other main elements of the Property.

St Martin’s Church, the ruins of St Augustine’s Abbey and Christ Church Cathedral together reflect milestones in the history of Christianity in Britain. They reflect in tangible form the reintroduction of Christianity to southern Britain by St Augustine, commencing at St Martin’s Church where Queen Bertha already worshipped, and leading to the conversion of King Ethelbert. They also reflect the successive architectural responses to Canterbury’s developing role as focus of the Church in England – adaptation of Roman buildings, the development of Anglo-Saxon building in mortared brick and stone, and the flowering of Romanesque and Gothic styles in addition to the development under St Augustine and the monks from Rome, of early Benedictine monasticism, which spread from its cradle in Canterbury throughout Britain, had a profound impact on English society. The Abbey scriptorium was one of the great centres of insular book production, and its influence extended far beyond the boundaries of Kent and Northumbria. The development of literacy, education and scholarship at the Abbey meant that Canterbury became the most important centre of learning in the country and Canterbury’s importance as a pilgrimage centre, based on Augustine and its other early saints, was transformed by the murder and canonisation of Archbishop Thomas Becket, whose Cathedral shrine attracted pilgrims from all over Europe and Canterbury became the seat of the spiritual leader of the Church of England. The wealth and power of the Cathedral in the 12th century resulting from the offerings of large numbers of pilgrims helped the building of the magnificent enlargement of the east end, with its exceptional stained glass windows and the rebuilding of the choir and transepts following the fire of 1174. These features form one of the finest examples of Early Gothic art and the Cathedral’s rich panorama of Romanesque, early Gothic and late Gothic art and architecture is exceptional.

Criterion (i): Christ Church Cathedral, especially the east sections, is a unique artistic creation. The beauty of its architecture is enhanced by a set of exceptional early stained glass windows which constitute the richest collection in the United Kingdom.

Criterion (ii): The influence of the Benedictine abbey of St Augustine was decisive throughout the Middle Ages in England. The influence of this monastic centre, and its scriptorium, extended far beyond the boundaries of Kent and Northumbria.

Criterion (vi): St Martin’s Church, St Augustine’s Abbey and the Cathedral are directly and tangibly associated with the history of the introduction of Christianity to the Anglo-Saxon kingdoms.

The three parts of this property, St Martin’s Church, St Augustine’s Abbey and Christ Church Cathedral, are linked by its buffer zone. The St Martin’s Church component of the property is aligned with the boundaries of the Church and Churchyard. The main part of St Augustine’s Abbey, including most of its outer precinct, is included within its boundary, although the areas of the precinct now occupied by the Sessions House and gaol that linked the Abbey with St Martin’s Church, the Almonry buildings located on Lady Wootton’s Green, and the detached 13th century Conduit House are excluded. The Cathedral section of the site is delineated by the ancient boundary of its precinct. The 12th century Conduit House, providing the Cathedral’s water supply, located on Military Road is not included in the property.

Individual ruins within the property suffer from weather and erosion and require regular inspection, maintenance and repair.

The structure of the Cathedral was said in 2006 to be under threat and a major fundraising campaign was launched to fund ongoing maintenance. This campaign is ongoing and the South East transept is undergoing extensive repair. However, the ruins remaining from Christ Church Priory are still considered to be in need of repair work.

In 1988, at the time of inscription, it was noted that the condition of preservation of the three parts of the property did not meet the same standards. The separateness of the three parts is still reflected by different conservation regimes. Work is ongoing to regularise this and a Conservation Plan has been prepared for the Cathedral. At the time of inscription the Bureau recommended that the Cathedral, St. Augustine's Abbey and St. Martin's Church should be included in one and the same protection area. This has been largely achieved by the designation of scheduled monuments and conservation areas.

St Martin’s Church has been in continuous use as a place of worship since the 6th century and the present buildings of the Cathedral above ground since the 11th century. The Cathedral also thrives as a place of learning and pilgrimage including the site of the shrine of St Thomas Becket. The majority of the property therefore maintains its historic use and function.

The Cathedral is the mother church of the Diocese of Canterbury and is also known throughout the world as the seat of the Archbishop of Canterbury and the church which welcomes the ten yearly Lambeth conferences of the bishops of the Anglican Communion.

St Martin’s Church has been altered and extended in the 6th, 7th and 14th centuries but the southern wall retains its Roman fabric. The Abbey was largely destroyed during the Reformation and is partially in ruins. The Cathedral and its precinct make up a diversified but coherent assembly of medieval architecture.

The vast Cathedral, and particularly its Bell Harry Tower, still dominates the city as it has done for five hundred years. The tower is the highest building in the city and its location in the valley floor means that it can be seen from surrounding higher land and extensively along the valley. Maintaining views to and from the Cathedral is crucial to sustain this visual dominance.

Inside the Cathedral are magnificent displays of medieval architecture, stained glass and furnishings. The coherence and almost perfect homogeneity of its choir, east transept, unfinished eastern tower, and Romanesque side chapels are still evident and these were seen at the time of inscription as one of the most beautiful architectural spaces of Early Gothic art.

The ruins of St Augustine’s Abbey convey its value in a more low key way and the links between it and the Cathedral and St Martin’s church need strengthening so that they can be seen as a single property and to convey more readily how they each contribute to the Outstanding Universal Value.

Government guidance on protecting the Historic Environment and World Heritage is set out in the National Planning Policy Framework and Circular 07/09. Policies to protect, promote, conserve and enhance World Heritage properties, their settings and buffer zones, are also found in statutory planning documents.

Canterbury City Council, the local authority, is concerned with the management, promotion and interpretation of the three property components. Particular objectives are to improve the links between the three components and to preserve and enhance the ‘buffer zone’ and setting of the three components. The Canterbury District Local Plan includes policies to ensure that the setting of the World Heritage property is protected. The City Council adopted the Canterbury Conservation Area Appraisal. This appraisal includes the three parts of the World Heritage property and an analysis of strategic views into and within the city. The importance of preserving views of the Cathedral is recognised in the document and will be taken into account when assessing applications.

The majority of the Cathedral precincts is subject to the ‘Care of Cathedrals Measure 1990’ as amended in 2005, which has similar status to an Act of Parliament. The Cathedral itself has a corresponding exemption from listed building consent, as provided for in the ‘Ecclesiastical Exemption (Listed Buildings and Conservation Areas) Order 2010.

The whole of the Cathedral precincts, the main parts of St Augustine’s Abbey and St Martin’s Church and Churchyard are included in Conservation Areas. The World Heritage Site Management Plan Committee is represented on the Canterbury Conservation Advisory Committee (CCAC), together with representatives of local historical, civic and amenity societies, local residential and business interests and local representatives of national professional and amenity organisations. The CCAC looks at all planning applications which affect the conservation areas within the City of Canterbury. This committee gives advice to the Planning Committee of the City Council and gives an opportunity for plans which affect the World Heritage Property itself and the buffer zone to be examined.

A Management Plan exists and is being reviewed regularly. The implementation of the Plan is overseen by the World Heritage Site Management Plan Committee that includes representatives of all the key stakeholders. Proposals for a buffer zone are under consideration.

The Dean and Chapter regularly carry out quinquennial inspections of the Cathedral building. A programme of major repairs is being carried out and the Trustees of Canterbury Cathedral Trust Fund are conducting an Appeal to fund this work.

Some of the ruins of the monastic buildings of the former Christ Church Priory are included in category B on the English Heritage ‘Buildings at Risk’ register. This category states that there is immediate risk of further rapid deterioration or loss of fabric. A solution has been agreed but not yet fully implemented although work is progressing slowly with the assistance of an English Heritage grant.