When the Emperor Frederick II built this castle near Bari in the 13th century, he imbued it with symbolic significance, as reflected in the location, the mathematical and astronomical precision of the layout and the perfectly regular shape. A unique piece of medieval military architecture, Castel del Monte is a successful blend of elements from classical antiquity, the Islamic Orient and north European Cistercian Gothic. 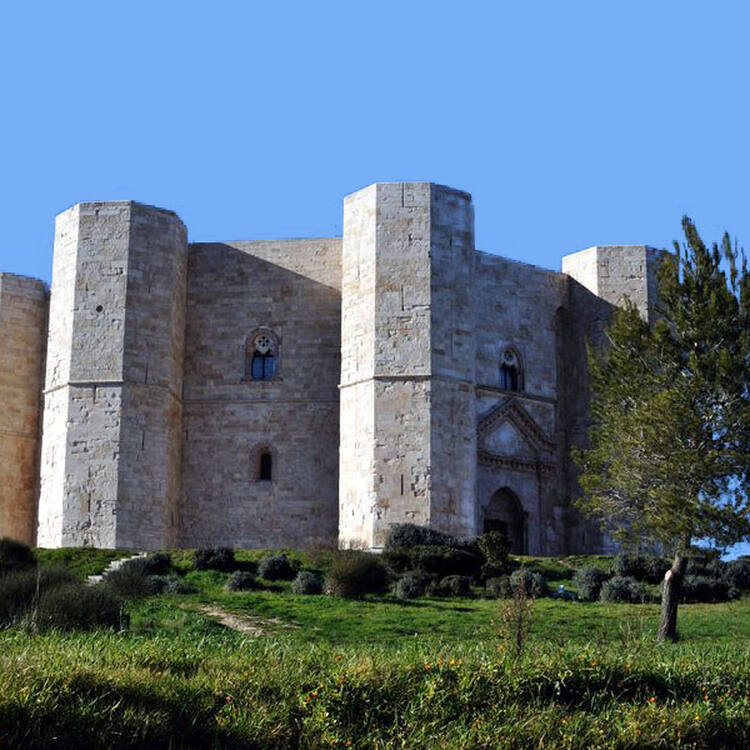 Castel del Monte, located in the municipality of Andria, rises on a rocky hill dominating the surrounding countryside of the Murgia region in southern Italy near the Adriatic Sea. A unique piece of medieval architecture, it was completed in 1240. The castle’s location, its perfect octagonal shape, as well as the mathematical and astronomical precision of its layout all reflect the broad education and cultural vision of its founder, Emperor Frederick II.

As a leader of modern humanism, the Germanic Emperor brought scholars together in his court from throughout the Mediterranean, combining Eastern and Western traditions. The castle’s unique design, an octagonal plan with octagonal towers at each angle, represents a search for perfection. Interior features reflect Eastern influences, such as the innovative hydraulic installation used by Frederick II for bathing in accord to the typical Arabic customs.

The site is of outstanding universal value in its formal perfection and its harmonious blending of cultural elements from northern Europe, the Muslim world and classical antiquity. Castel del Monte is a unique masterpiece of medieval architecture, reflecting the humanist ideas of its founder, Frederick II of Hohenstaufen.

Criterion (i): Given its formal perfection and harmonious blending of cultural elements from northern Europe, the Muslim world and classical antiquity, Castel del Monte is a unique masterpiece of medieval military architecture which reflects the humanist ideas of its founder, Frederick II of Hohenstaufen.

Criterion (ii): Inseparably linked to Frederick II of Hohenstaufen, the building of Castel del Monte illustrates the cosmopolitan spirit of the Emperor who brought together Greek, Arab, Italian and Jewish scholars to his court in Palermo. This designates him as one of the precursors of the modern humanists.

Criterion (iii): Symbolic of the Mediterranean policy of a Germanic Emperor who was born at Iesî, brought up in Sicily and attracted at a very early age by the Oriental world, Castel del Monte combines intellectual and moral elements from the great Mediterranean civilizations in one creation.

The integrity of the site has been protected, in part, due to the fact that the castle has not undergone any significant structural alteration. Marble and mosaic interior decorative elements, however, have deteriorated and in many cases been removed.

The perimeter of the property includes the castle, which rises solitarily on top of its hill, and an immense protected area around the castle that is subject to landscape protection and provides an effective buffer zone. Taken together, the two areas fully represent the exceptional nature of the site, some characteristics being monumental in type and in excellent state of preservation, while others are more percipient and, considered alongside the physical setting, ensure the overall integrity.

Castel del Monte has been subjected to almost no structural alteration, which has allowed it to maintain authenticity in a number of principle areas. The castle’s setting is unchanged as it is still found on a rocky peak dominating the surrounding landscape. Its original octagonal form and interior design have been retained. In terms of construction materials, the exterior limestone block construction is intact while the interior has been degraded by the removal or decay of its marble and mosaic decoration. Additionally two original sculptures are in the Bari Picture Gallery. However, there have been few later interventions. Conservation work since 1878 has been of good quality and consistent with Italian standards. Therefore the authenticity of the monument is high.

The monument was acquired by the Italian State in 1876 and is protected under several State laws. Under the terms of Law No 1089/39 concerning the artistic, archaeological and cultural heritage of the Italian State, it was declared to be of great artistic and historical importance by the decree of the Ministry for Cultural Heritage and Activities in 1978. The landscape of a large area around the castle, which coincides with the buffer zone (10,847.3 hectares), is protected by another ministerial decree under the law 1497/1939, integrated in the national Law “Codice dei beni culturali e del paesaggio” which concerns the protection of cultural heritage.

Management of the monument is in the hands of the Soprintendenza per i Beni Architettonici e Paesaggistici per le Province di Bari, Barletta-Andria-Trani e Foggia. This peripheral office of the Ministry of Cultural Heritage and Activities and Tourism. is responsible for the maintenance and guardianship of the monument, which is open to visitors. It also carries out appropriate conservation work, the scale and nature of which depends upon available financial resources.