The archaeological site of Hattusha, former capital of the Hittite Empire, is notable for its urban organization, the types of construction that have been preserved (temples, royal residences, fortifications), the rich ornamentation of the Lions' Gate and the Royal Gate, and the ensemble of rock art at Yazilikaya. The city enjoyed considerable influence in Anatolia and northern Syria in the 2nd millennium B.C. 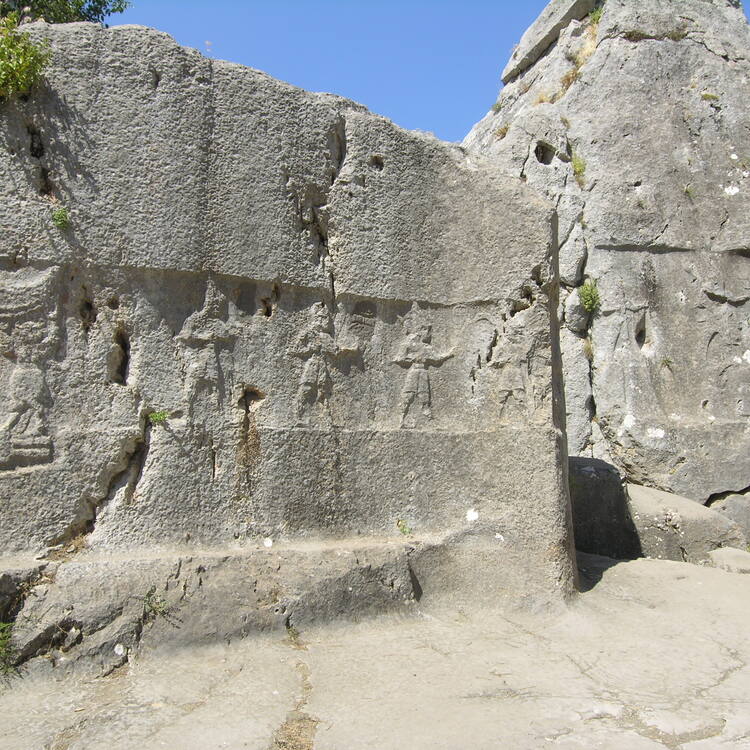 Hattusha: the Hittite Capital is located in Boğazkale District of Çorum Province, in a typical landscape of the Northern Central Anatolian Mountain Region. It lies at the south end of the Budaközü Plain, on a slope rising approximately 300 m above the valley, and is divided by the Kızlarkayası creek into the lower city in the north and the upper city in the south.

The property consists of the Hittite city area, the rock sanctuary of Yazılıkaya on the north, the ruins of Kayalı Boğaz on the east and the İbikçam Forest on the south. A monumental enclosure wall of more than 8 km in length surrounds the whole city. There are remains of older walls around the lower city and section walls dividing the large city area in separate districts. The ruins of the upper city’s fortification form a double wall with more than a hundred towers and, as far as is known today, five gateways: two in the west, the Lion’s Gate in the south-west, the King’s Gate in the south-east and a procession gate, the Sphinx Gate in the south of the city. The latter is located on top of a high artificial bastion with stone-plastered slopes, with two staircases leading to the gateway at the top and an arched stone tunnel running underneath. The impressive ruins of fortifications, placed on rocky peaks in the centre of the Upper City, bear witness to the complexity of Hittite rock masonry, and the longest known Hittite hieroglyphic inscription from the Hittite Empire can be found in the Upper City at Nişantepe.

The best-preserved ruin of a Hittite Temple from the 13th century B.C., known as Great Temple, is located in the Lower City. Other temples of similar date and shape, albeit generally smaller, are situated in the Upper City, which mostly consisted of a temple city for the gods and goddesses of the Hittite and Hurrian pantheon. The remains of a densely inhabited city district were unearthed in the Lower City, where their foundations and arrangement can still be seen in the area north from Great Temple.

The famous rock sanctuary of Yazılıkaya, which is an open-air temple with two natural chambers cut into the bedrock, lies 2 km northeast of the capital, on a slope of a mountain barrier. The walls of the rock chambers are covered with the richest and most striking samples of Hittite relief art, featuring gods and goddesses and the figures of the Great King Tuthaliya IV. Kayalı Boğaz, first mentioned in cuneiform inscriptions, is a large fortified settlement located 1.5 km east of the King’s Gate. It may have served as one of the outposts and strongholds, located in the countryside to watch and control the main roads leading to the city. The İbikçam Forest represents one of the last remaining examples of a dense forest covering the mountains  south of the capital in Hittite times.

Hattusha is an archaeological site remarkable for its urban organization, the types of construction and rich ornamentation that have been preserved and for the ensemble of rock art.

Criterion (i): The city’s fortifications, along with the Lions’ Gate, the Royal Gate and the Yazılıkaya rupestral ensemble and its sculptured friezes, represent unique artistic achievements.

Criterion (ii): Hattusha exerted a dominating influence upon the civilizations of the 2nd and 1st millennia B.C. in Anatolia and northern Syria.

Criterion (iii): The palaces, temples, trading quarters and necropolis of this political and religious metropolis provide a comprehensive picture of a Hittite capital and bear a unique testimony to the now extinct Hittite civilization.

Criterion (iv): Several types of buildings or architectural ensembles are perfectly preserved in Hattusha: the royal residence, the temples and the fortifications.

All the attributes necessary to express the Outstanding Universal Value are located within the property. Given the location of the property, there are no detrimental effects or threats from industrial development. Residential areas are also at a considerable distance from the archaeological site and spread to the north and northwest, which implies that urban development is currently not a threat to the property. The setting of the property within its natural environment, without any modern impact, has also been maintained.

Combined archaeological research, long-term restoration and preservation efforts of the German Archaeology Institute, in close cooperation with the Turkish authorities, have uncovered a large variety of buildings such as temples, palaces and dwellings, but also technical and communal installations such as large buried granaries and artificial water ponds. Those discoveries gave access to one of the most fascinating ancient cities of the Near and Middle East. Although interventions have been carried out for conservation purposes, attributes have largely retained their authenticity in terms of form, design and layout, allowing visitors to experience a Bronze Age metropolis and understand the relations between the buildings. Careful consideration to the use of restoration materials and techniques is needed to ensure that these conditions continue to be met.

The ancient city area, Kayalı Boğaz and Yazılıkaya are under the protection of National Conservation Law No 2863. The ancient city area was declared a 1st and 2nd degree archaeological site, while Kayalıboğaz and Yazılıkaya were declared as 1st degree archaeological sites. Furthermore, the area encompassing Kayalıboğaz, Yazılıkaya and the ancient city was declared  2nd and 3rd degree archaeological zones, allowing to control all the interventions and to support the conservation of the inscribed property. The approval of the Regional Conservation Council has to be obtained for all physical interventions within the property. Furthermore, the property is located within the Bogazköy – Alacahöyük National Park, which was approved by the 1988 Council of Ministers’ Degree No 13331. This administrative organization guarantees that archaeological, historical, cultural and natural values are protected together to sustain the Outstanding Universal Value of the property. Conservation and protection of the property are carried out jointly by the Turkish Ministry of Culture and Tourism and the Çorum Museum. Furthermore, those authorities control all activities relating to the archaeological site and any infrastructural developments in its immediate surroundings. Decision making is guided by conservation plans for the sites, approved by the Conservation Council’s decisions. These planning tools require systematic review to ensure the long-term protection of the property.