Report of the Joint UNESCO-ICOMOS Reactive Monitoring Mission to the Tower of London and to ... 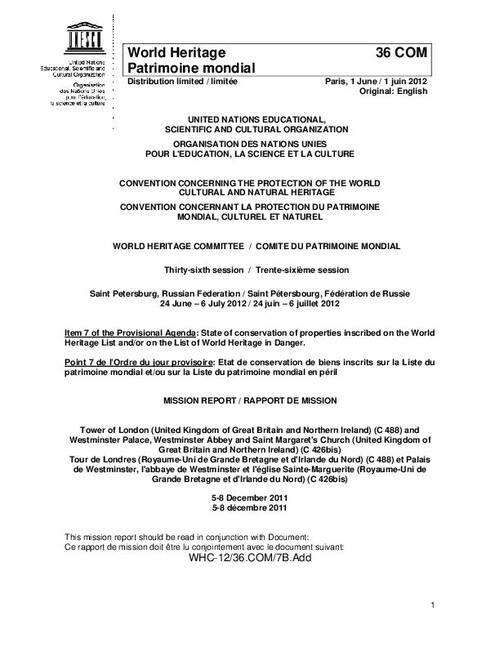 The mission met with key stakeholders, at the most senior level, including professional heritage entities, urban managers from the City of London and adjacent boroughs, historians and economists, who all underlined the importance of understanding the dynamic relationship between the properties and their context.

At the time of the 2006 reactive monitoring mission to London, concerns were raised with regard to the gaps in national legislation and local regulations relating to the protection of World Heritage sites. Meanwhile, a series of supplementary planning guidance and other publications have been developed by the Mayor, English Heritage and others to guide the conservation and management of urban World Heritage Sites.
The "Tower of London Local Setting Study" that was prepared by consultants for the Tower World Heritage Site Consultative Committee in August 2010 constitutes an important step towards the protection of the property's setting. Any new development situated to the west and north of the property would have to respect the conditions as defined in this study and respect the visual integrity of the property.

Given the dynamic urban context of the Tower of London and Westminster Palace, Westminster Abbey and Saint Margaret's Church, the mission reiterated the World Heritage Committee's advice to tightly regulate the construction of tall buildings in the vicinity of the property to maintain their visual integrity and to protect their Outstanding Universal Value.