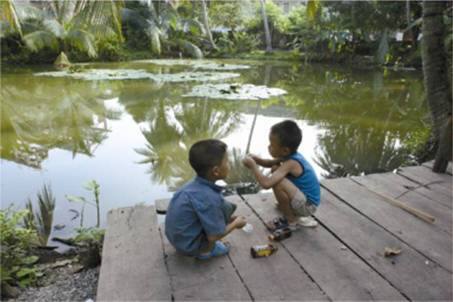 Urban heritage preservation policies, when separated from development strategies, can lead to a marginalization of the poorest populations. Constraints caused by regulations, in the absence of assistance mechanisms, lead to the exclusion of certain categories of the population. In the same way, tourism development stimulates rising property prices and destabilizes the local commercial infrastructure by threatening services intended for the local population (schools, local businesses, etc.). The loss in revenue of local communities and the transformation of their environment often pushes them to leave.

It is in this context that UNESCO’s World Heritage Centre launched a project in 2002 entitled “Poverty Reduction through Sustainable World Heritage Management”. This projects falls within the framework of a call for proposals, made in 2002, by the Director General of UNESCO in order to select cross-sector projects on the theme of eliminating poverty and extreme poverty. It aims to promote an approach combining heritage conservation and sustainable development and to explore assistance mechanisms for communities. Five properties inscribed on the World Heritage List or Tentative Lists were selected: The City of Porto-Novo : ancient districts and Royal Palace (Benin), Island of Saint-Louis (Senegal), The Ancient Waterfront Towns in the South of Yangtze River (China), Town of Luang Prabang (Lao People's Democratic Republic) and Georgetown (Guyana).

For each site, surveys were carried out in different neighborhoods to study the socio-economic profile of the inhabitants and land use and property. Based on these studies different activities were developed such as: establishment of a fund for the rehabilitation of housing and microcredit, training for income-generating activities, establishing a tourism tax, and raising awareness in schools. These actions, carried out on a small scale, were based on projects supported by other programmes in progress on the same sites (projects of the European Union, the World Bank and the Inter-American Development Bank; decentralized cooperation agreements).

Within the framework of the France-UNESCO Cooperation Agreement methodological support was provided for this cross-sector project through economic and legal expertise given by the Caisse des dépôts et consignations (a public group serving the general interest and economic development).

A microcredit project was implemented in Senegal, in Saint-Louis, which led to some successful small scale activities.