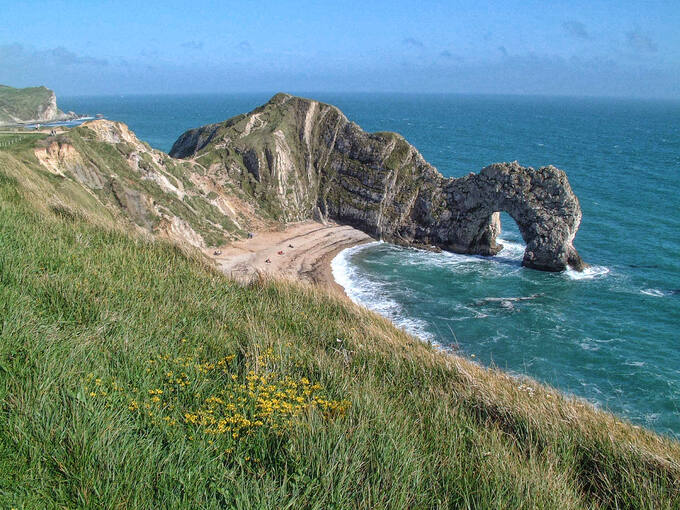 Located on the south coast of the United Kingdom, the nominated site comprises approximately 155km of undeveloped coastline and countryside. The cliff exposures along the Dorset and East Devon coast provide an almost continuous sequence of rock formations spanning the Mesozoic Era, or some 185 million years of the Earth's history.

Tim Badman, World Heritage Site Manager and Team Leader for the Dorset and East Devon Coast, is certain that the site’s status as a World Heritage, increases awareness of the area internationally, regionally, nationally and locally.

"Designation increases awareness at all levels. We have also led a very active programme of work on awareness raising. The most important is local awareness, where our emphasis is on organizing and developing a series of working groups, producing a twice yearly newsletter, providing over one talk per week to local groups, and generating local press stories. World Heritage Site status is a form of recognition that the public and the media respond to much more actively and positively than most national designations." – Tim Badman

In the wake of WH listing for this site there was a large and positive response from national press and other media. This in part helped to create widespread enthusiasm and pride in the local communities, which in turn brought together other sectors in support of the site.

The managers of this site point to two specific examples where WH status appears to have helped protect the site. In the first, the status added weight to a case for resisting inappropriate construction near the site. In the second case, a private development application, World Heritage status was directly cited by the planning authority as one of the reasons for refusal.

When asked whether WH status increases the funds available to the site, Tim emphatically answered, yes.

"We can show a demonstrable step change in the attitude of funding bodies in the wake of World Heritage designation. Both Dorset and Devon County Councils have provided significant additional funding of approximately £300,000 to allow for the appointment of a staff team, conservation projects, interpretation and publications budget, and to support sustainable tourism marketing projects." – Tim Badman

The site has also succeeded in attracting £650,000 (Over US $1,000,000), for a new and very successful branded bus service. The WH designation was effectively the reason for the bid as it created the impetus to develop a complete transport management plan for the area. It was considered that the outstanding value recognized by the WH designation justified an excellent transport service, so that visitors could have easy access to the whole site.

To further strengthen partnership working, and increase eligibility and access to additional sources of funding, the sites management authorities have created the World Heritage Coast Trust to lead work on commercial aspects of the site, and to seek sponsorship and grants.

"We are confident that the WH Coast Trust will rapidly become a significant funding body. We would particularly like to see it funding research projects associated with conserving the site and the development of a range of publications designed to educate and inform a wide variety of visitors, ranging from school parties to holidaymakers." - Malcolm Turnbull, World Heritage Coast Trustee.

The sponsorship of the official site guide book is a prominent example of why this trust is necessary. The publication of this book was sponsored by BP (formerly British Petroleum). However, the £20,000 that BP provided was for the specific purpose of producing the guide book, and was contingent on the financial benefits being passed to the World Heritage Coast Trust.

"BP’s donation was seen as an excellent opportunity to contribute locally, and to directly help the development of the World Heritage Coast Trust on a continuous basis" - Grant Evans, Business Manager for BP Wytch Farm operation

Besides the associated increased levels of funding and stronger partnership working, already mentioned, the management team also takes part in a range of conferences and training events within the UK and Europe.

As with all managers interviewed Tim agreed that increased networking and exchange between sites would improve management further, and volunteered his willingness to take part.

The managers of Dorset and East Devon Coast World Heritage site have been running a programme of courses called ‘Jurassic Host’ in collaboration with the main tourism promotion body for the area. The course, which features a two-hour segment on WH, has had fifteen sessions to date, all of which were very well attended.

The large volume of visitors to this site has been effectively harnessed through the sale of the official guide book, mentioned above. The guide book puts £1 back into the site’s trust fund for each sale and has sold 18,000 copies in one year.

The WH manager of Dorset and East Devon Coast agreed that World Heritage adds value and builds support for protected areas, and went on to say;

"I think World Heritage gives a healthy approach to protected areas as important features in their own right, and also as things to celebrate and present to visitors that, if managed successfully, actively contribute directly to the local economy." – Tim Badman

The managers are actively seeking further opportunities to fund interpretation and transport projects, particularly in relation to the promotion of walking, and the establishment of new high quality public transport facilities. A series of local projects to develop interpretive materials and facilities are also seeking funding.

The development of the World Heritage Coast Trust, mentioned above, will require enthusiastic and capable staff. The site managers would be happy to talk to interested parties who would be able to help with this work on a voluntary basis.

If you represent a company, organization or other funding agency and you would like to help conserve Dorset and East Devon Coast or partner with a specific project, please mail The World Heritage Centre.