A workshop on the theme “Rivers and heritage” was held on 2 November 2009 at the French Senate in Paris, France. The workshop was organised by the France-UNESCO Cooperation Agreement in partnership with the French Senate. Hosted by Erik Orsenna from the Académie française, the meeting gathered approximately a hundred participants, including representatives of the water and culture sectors, local authorities, stakeholders of the cooperation that are engaged in safeguarding projects and river enhancement, as well as experts and academics that have initiated work on the theme of the river through research such as geography, anthropology and history. The meeting’s objective was to focus on the transversal theme of the France-UNESCO Cooperation Agreement, on which various operations have been engaged (Mali, Lao People's Democratic Republic, etc.).

The discussions were organised around three key questions: restructure the river for sustainable development; enhancing the cultural resources of the river; and exploring the “rivers of man”. Different engaging actions have been undertaken to enhance or revive the cultures of and by the river. Several types of activities have been presented on the basis of case studies of projects implemented on several rivers, including those of the Niger, Mekong, Nil, Ganges, Loire, Rhône. As the “river to river” cooperation experiences exemplify, the participants recalled the importance of this cultural approach in the renewal of urban planning and international cooperation.

The proceedings of the “Rivers and heritage” workshop are available.

In the continuity of this meeting, a workshop on “Knowledge and Dissemination of Heritage and River Cultures, Perspectives on the Development of River Territories” was organised in November 2010 in Senegal by the Saint-Louis River House at the Island of Saint-Louis, in partnership with the Rhône River House, France, within the framework of the France-UNESCO Cooperation Agreement and in link with the “Niger-Loire: Governance and Culture” project. 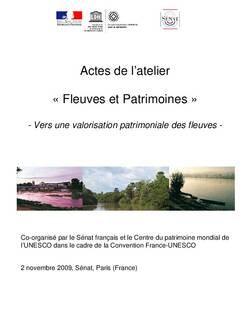 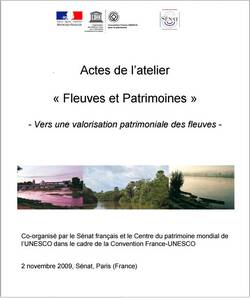 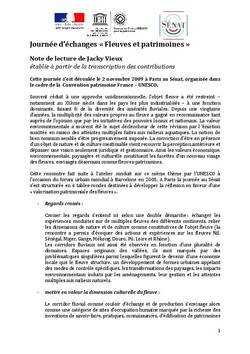