A series of 30 exhibition panels available for World Heritage Exhibits. These posters can be used free of copyright restrictions for non-commercial purposes. They are available for downloading as PDF (See Documents below).

Culture/Nature: the link to preservation

The World Heritage emblem symbolises the interdependence of the world's natural and cultural diversity.

The responsibility of every State party
Each State Party to the Convention recognizes its primary duty to ensure the identification, protection, conservation and transmission to future generations of the cultural and natural heritage situated on its territory.

States Parties to the Convention.

Helping hands: international cooperation.
Without the support of countries throughout the world, some World Heritage sites would deteriorate or even disappear through lack of technical expertise or funding to preserve them.

How the World Heritage fund helps in the conservation process.
To support the efforts of the States Parties, the Convention established the World Heritage Fund, which includes obligatory and voluntary contributions from its signatories, as well as other donations.

Authenticity-integrity: the test of value.
To be included on the World Heritage List, a property must be of outstanding universal value and meet one or more specific cultural or natural criteria.

The nomination process
The application for a site to be inscribed on the World Heritage List must come from the State Party itself. The application has to include a plan detailing how the site is managed and protected.

Cultural landscapes: people and nature interacting.
As part of the effort to make the World Heritage List more universal and representative, the concept of cultural landscapes was elaborated in 1992 to recognize significant interactions between people and the natural environment.

Threats to World Heritage.
More and more, sites, both cultural and natural, are at risk of degradation as a direct or indirect result of uncontrolled urbanization, unsustainable practices in natural resource exploitation ...

Monitoring the state of conservation.
Once a site is inscribed on the World Heritage List, what is the State Party's responsibility? Above all, it is to maintain the values for which the site was inscribed on the List.

How sites are protected.
Regulations intended to ensure the conservation of the natural and built environment can, at times, have negative impacts on the local community.

Conservation and development: the keys to success .
The Convention urges governments " to adopt a general policy which aims to give the cultural and natural heritage a function in the life of the community and to integrate the protection of that heritage into comprehensive planning programmes".

The management of each site varies with its need
Unmodified ecosystems and other wilderness areas, natural monuments of exceptional physical features, areas for habitat and species conservation, and natural parks for recreation...

The role of site managers
Site management must take into account local and national plans, forecasts of population growth or decline, economic factors, traffic projections as well as preventive measures against disasters ...

Sustainable tourism: balancing the best of both worlds.
World Heritage sites attract tourists, and tourism is the world's biggest and fastest growing industry. What will be the cost of this tremendous boom to the integrity...

As a centre of civility and urbanity, as a place of exchanges and encounters, throughout time, cities have played a vital role in the development of civilisation.

World Heritage in young hands
Only by instilling a deep sense of responsibility in young people towards the World Heritage can we be confident that the planet's cultural and natural iversity will endure into the future. 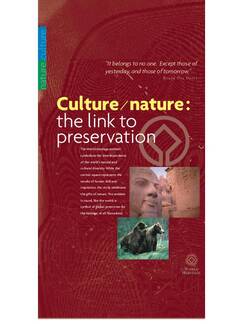