We, the participants of the first Asia-Pacific World Heritage Youth Forum are here to express our views on the importance of preserving World Heritage.

We can appreciate and see all these sites because our forefathers preserved them for us and in turn, it is our duty to preserve these for our children, so they too can appreciate them and be inspired by them.

The world is moving so fast, and the majority of the people are rushing in to the 21st century forgetting their origins, whereas it should be the other way around. We should appreciate our roots, our culture, and keeping that as a foundation. We should build our future.

During this week, students from different cultures, religions, languages, traditions, climates and foods came together to respect and to learn the importance of preserving World Heritage. We have pointed out some guide-lines to ensure that the heritage is preserved for the future:

At our school we will share our experience gained here in Beijing, with other teachers, students, schools, local communities (including the media) on important outcomes of the Forum.

We look forward to receiving the video on the Beijing Youth Forum so that we can present the students' achievements to others in our, community and country, especially the national television companies.

We will submit an action-oriented report to the National Commission far UNESCO and to educational authorities about the need to give support in favor of World Heritage Education particularly through:

In order to co-ordinate the work at the sub-regional level, we, teachers participating at the Beijing Youth Forum, suggest an overall four-year Asia-Pacific World Heritage Plan of Action including:

Following the international Youth Forum held in Bergen, Norway in 1995, an Asia-Pacific World Heritage Youth Forum was held in Beijing, China in September 1997. At this Forum UNESCO launched the Young People's World Heritage Education Project in Asia and the Pacific. The Beijing Forum became a springboard for the project to spread throughout the region.

The concept of World Heritage was introduced and the participants realized how critically endangered natural and cultural heritage are throughout Asia and the Pacific. The Beijing Forum empowered youth enabling them to become personally involved in the preservation of the region's and the world's heritage. The participants vowed to carry the message of the importance of World Heritage back to their own countries, home communities and schools.

The Beijing Forum brought awareness of local and national heritage to a regional level, providing a unique opportunity for intercultural learning through social and cultural activities and visits to heritage sites. Student activities were designed to test and develop exercises for the World Heritage Education Resource Kit. The draft Kit was tested and evaluated, with both students and teachers giving suggestions on how to improve it.

One of the student activities focused on expressing cultural identities and seeing how one's identity is rooted in the heritage of the rest of the world. The students realized that heritage is living and changing, built by generations before us, with each generation adding a new layer to the culture with their thoughts, deeds and accomplishments.

The Beijing Forum also turned into a cultural melting pot, as participants shared their heritage and identity with others by displaying artifacts, clothes, paintings and posters. The participants became aware of their common heritage through this exhibition.

Visits to some of China's magnificent heritage sites were highlights of the Beijing Forum. Students and teachers had the opportunity to visit three World Heritage sites, as well as two sites nominated for inclusion in the World Heritage List and which now have been inscribed. Equipped with worksheets to test activities from the World Heritage Education Kit, students explored the Great Wall, Peking Man Site, the Forbidden City, the Summer Palace and the Temple of Heaven. Based on these experiences, students discussed in working groups and agreed upon recommendations on how to organize visits and how to better prepare sites for visitors, including young visitors.

By becoming aware of the local heritage, which is all around them, students are encouraged to identify their own cultural roots, and to develop an understanding of the similarities and differences they share with their fellow students. This understanding encourages mutual respect, which is one objective of World heritage Education. The Asia-Pacific World Heritage Youth Forum brought this awareness to a regional level, providing a unique opportunity for intercultural learning through social and cultural activities and visits to sites.

95 participants, of which: 26 teachers and 57 students, 1 observer, 11 organizers/resource persons

Round Table on `Youth's Contribution to the Advancement of UNESCO's Ideals'
Two students from the Forum, Luo Hong, China and Nilakshi Parndigamage, Sri Lanka, were invited by UNESCO to take part in this Round Table on 31 October 1997 in Paris.

Intergovernmental Conference on Cultural Policies for Development
A participant from the Beijing Forum was invited to this conference, which was held in Stockholm, Sweden from 30 March to 2 April 1998.

CNN World Report
A CNN World Report featuring the Beijing Forum was produced by UNESCO Office of Public Information and broadcast throughout the last week of January 1998, enabling viewers worldwide to learn about the objectives and some of the unique features of the encounter

Second African World Heritage Youth Forum
Plans are underway to organize the next Regional Forum on the island of Gore, Dakar, Senegal in 1998 in co-operation with the Senegalese National Commission for UNESCO.

Second International World Heritage Youth Forum
UNESCO and the Osaka Junior Chamber of Commerce Inc., Japan are planning to organize an International Youth Forum involving ASP students and teachers from all parts of the world from 22-29 November, 1998, in Kyoto, Japan.

Pacific World Heritage Youth Forum
The UNESCO Apia Office has initiated a project to design heritage education specifically for the Pacific, involving hands-on training for heritage volunteers. In 1999, a Youth Volunteers' World Heritage Forum is planned to be held in Nan Madol, Federated States of Micronesia. 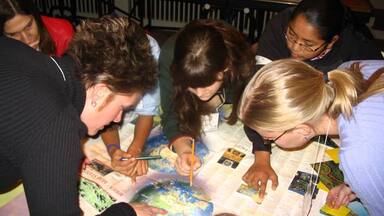