The Greater Blue Mountains Area consists of 1.03 million ha of sandstone plateaux, escarpments and gorges dominated by temperate eucalypt forest. The site, comprised of eight protected areas, is noted for its representation of the evolutionary adaptation and diversification of the eucalypts in post-Gondwana isolation on the Australian continent. Ninety-one eucalypt taxa occur within the Greater Blue Mountains Area which is also outstanding for its exceptional expression of the structural and ecological diversity of the eucalypts associated with its wide range of habitats. The site provides significant representation of Australia's biodiversity with ten percent of the vascular flora as well as significant numbers of rare or threatened species, including endemic and evolutionary relict species, such as the Wollemi pine, which have persisted in highly-restricted microsites. 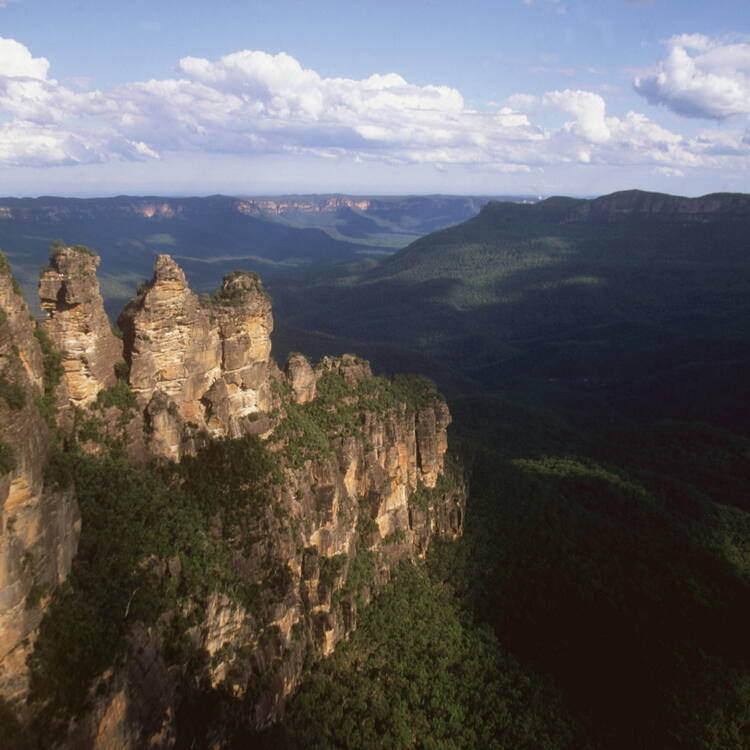 The Greater Blue Mountains Area (GBMA) is a deeply incised sandstone tableland that encompasses 1.03 million hectares of eucalypt-dominated landscape just inland from Sydney, Australia’s largest city, in south-eastern Australia.  Spread across eight adjacent conservation reserves, it constitutes one of the largest and most intact tracts of protected bushland in Australia.  It also supports an exceptional representation of the taxonomic, physiognomic and ecological diversity that eucalypts have developed: an outstanding illustration of the evolution of plant life.  A number of rare and endemic taxa, including relict flora such as the Wollemi pine, also occur here.  Ongoing research continues to reveal the rich scientific value of the area as more species are discovered.

The geology and geomorphology of the property, which includes 300 metre cliffs, slot canyons and waterfalls, provides the physical conditions and visual backdrop to support these outstanding biological values.  The property includes large areas of accessible wilderness in close proximity to 4.5 million people.  Its exceptional biodiversity values are complemented by numerous others, including indigenous and post-European-settlement cultural values, geodiversity, water production, wilderness, recreation and natural beauty.

Criterion (ix): The Greater Blue Mountains include outstanding and representative examples in a relatively small area of the evolution and adaptation of the genus Eucalyptus and eucalypt-dominated vegetation on the Australian continent.  The site contains a wide and balanced representation of eucalypt habitats including wet and dry sclerophyll forests and mallee heathlands, as well as localised swamps, wetlands and grassland.  It is a centre of diversification for the Australian scleromorphic flora, including significant aspects of eucalypt evolution and radiation. Representative examples of the dynamic processes in its eucalypt-dominated ecosystems cover the full range of interactions between eucalypts, understorey, fauna, environment and fire.  The site includes primitive species of outstanding significance to the evolution of the earth’s plant life, such as the highly restricted Wollemi pine (Wollemia nobilis) and the Blue Mountains pine (Pherosphaera fitzgeraldii).  These are examples of ancient, relict species with Gondwanan affinities that have survived past climatic changes and demonstrate the highly unusual juxtaposition of Gondwanan taxa with the diverse scleromorphic flora.

Criterion (x): The site includes an outstanding diversity of habitats and plant communities that support its globally significant species and ecosystem diversity (152 plant families, 484 genera and c. 1,500 species).  A significant proportion of the Australian continent’s biodiversity, especially its scleromorphic flora, occur in the area.  Plant families represented by exceptionally high levels of species diversity here include Myrtaceae (150 species), Fabaceae (149 species), and Proteaeceae (77 species).  Eucalypts (Eucalyptus, Angophora and Corymbia, all in the family Myrtaceae) which dominate the Australian continent are well represented by more than 90 species (13% of the global total).  The genus Acacia (in the family Fabaceae) is represented by 64 species.  The site includes primitive and relictual species with Gondwanan affinities (Wollemia, Pherosphaera, Lomatia, Dracophyllum, Acrophyllum, Podocarpus and Atkinsonia) and supports many plants of conservation significance including 114 endemic species and 177threatened species.

The diverse plant communities and habitats support more than 400 vertebrate taxa (of which 40 are threatened), comprising some 52 mammal, 63 reptile, over 30 frog and about one third (265 species) of Australia’s bird species.  Charismatic vertebrates such as the platypus and echidna occur in the area.  Although invertebrates are still poorly known, the area supports an estimated 120 butterfly and 4,000 moth species, and a rich cave invertebrate fauna (67 taxa).

The seven adjacent national parks and single karst conservation reserve that comprise the GBMA are of sufficient size to protect the biota and ecosystem processes, although the boundary has several anomalies that reduce the effectiveness of its 1 million hectare size.  This is explained by historical patterns of clearing and private land ownership that preceded establishment of the parks.  However parts of the convoluted boundary reflect topography, such as escarpments that act as barriers to potential adverse impacts from adjoining land.  In addition, much of the property is largely protected by adjoining public lands of State Forests and State Conservation Areas.  Additional regulatory mechanisms, such as the statutory wilderness designation of 65% of the property, the closed and protected catchment for the Warragamba Dam and additions to the conservation reserves that comprise the area further protect the integrity of the GBMA.  Since listing, proposals for a second Sydney airport at Badgerys Creek, adjacent to the GBMA, have been abandoned.

Most of the natural bushland of the GBMA is of high wilderness quality and remains close to pristine.  The plant communities and habitats occur almost entirely as an extensive, largely undisturbed matrix almost entirely free of structures, earthworks and other human intervention.  Because of its size and connectivity with other protected areas, the area will continue to play a vital role in providing opportunities for adaptation and shifts in range for all native plant and animal species within it, allowing essential ecological processes to continue.  The area’s integrity depends upon the complexity of its geological structure, geomorphology and water systems, which have created the conditions for the evolution of its outstanding biodiversity and which require the same level of protection.

An understanding of the cultural context of the GBMA is fundamental to the protection of its integrity.  Aboriginal people from six language groups, through ongoing practices that reflect both traditional and contemporary presence, continue to have a custodial relationship with the area.  Occupation sites and rock art provide physical evidence of the longevity of the strong Aboriginal cultural connections with the land.  The conservation of these associations, together with the elements of the property’s natural beauty, contributes to its integrity.

The GBMA is protected and managed under legislation of both the Commonwealth of Australia and the State of New South Wales.  All World Heritage properties in Australia are ‘matters of national environmental significance’ protected and managed under national legislation, the Environment Protection and Biodiversity Conservation Act 1999. This Act is the statutory instrument for implementing Australia’s obligations under a number of multilateral environmental agreements including the World Heritage Convention.  By law, any action that has, will have or is likely to have a significant impact on the World Heritage values of a World Heritage property must be referred to the responsible Minister for consideration.  Substantial penalties apply for taking such an action without approval.  Once a heritage place is listed, the Act provides for the preparation of management plans which set out the significant heritage aspects of the place and how the values of the site will be managed.

Importantly, this Act also aims to protect matters of national environmental significance, such as World Heritage properties, from impacts even if they originate outside the property or if the values of the property are mobile (as in fauna). It thus forms an additional layer of protection designed to protect values of World Heritage properties from external impacts. In 2007, the GBMA was added to the National Heritage List, in recognition of its national heritage significance under the Act.

A single State government agency, the New South Wales Office of Environment and Heritage, manages the area.  All the reserves that comprise the GBMA are subject to the National Parks and Wildlife Act 1974 and the Wilderness Act 1987.  Other relevant legislation includes the Threatened Species Conservation Act 1995, the Environmental Planning and Assessment Act 1979, the Sydney Water Catchment Management Act 1998 and the Heritage Act 1977.

At the time of nomination statutory management plans for the constituent reserves of the GBMA were in place or in preparation, and these are reviewed every 7-10 years.  Currently all management plans have been gazetted, and those for three component reserves (Wollemi, Blue Mountains, and Kanangra-Boyd National Parks, which constitute 80% of the property) are under revision for greater emphasis on the protection of identified values.  An over-arching Strategic Plan for the property provides a framework for its integrated management, protection, interpretation and monitoring.

The major management challenges identified in the Strategic Plan fall into six categories: uncontrolled or inappropriate use of fire; inappropriate recreation and tourism activities, including the development of tourism infrastructure, due to increasing Australian and overseas visitor pressure and commercial ventures; invasion by pest species including weeds and feral animals; loss of biodiversity and geodiversity at all levels; impacts of human-enhanced climate change; and lack of understanding of heritage values.

The set of key management objectives set out in the Strategic Plan provides the philosophical basis for the management of the area and guidance for operational strategies, in accordance with requirements of the World Heritage Convention and its Operational Guidelines.  These objectives are also consistent with the Australian World Heritage management principles, contained in regulations under the Environmental Protection and Biodiversity Conservation Act. 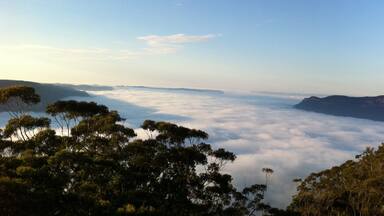