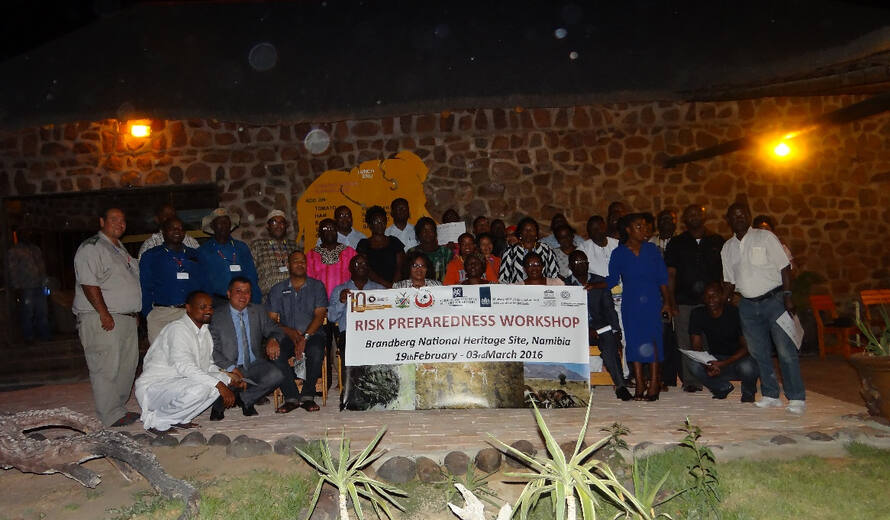 This workshop is part of UNESCO’s ongoing efforts to address the priorities of the Second Cycle of Periodic Reporting for the Africa region, which called for increased capacity-building in dealing with risks and threats to heritage properties at both site-level and regional-level, The training course was co-organized by the African World Heritage Fund, a UNESCO category 2 centre, in association with the School of African Heritage and the National Heritage Council of Namibia at the Brandberg National Monument in Namibia from 18 February to 3 March 2016.

The Brandberg is a large inselberg rising over 1,800 m above the surrounding plains features an exceptionally rich palaeo-archaeological heritage with a high concentration of prehistoric rock art (more than 43,000 paintings and 900 sites alone). Inscribed as a mixed site on the Tentative Heritage List of Namibia in 2002, the area is threatened by the effects of climate change.

The workshop was designed specifically for heritage site managers and other professionals active in related areas such as peacekeeping and disaster risk. A total of 19 participants from 7 African countries were selected to take part in the workshop. In the course of the two-weeks, the participants followed a series of lectures complemented by practical sessions and field work, which provided an opportunity to apply the knowledge acquired in lectures. The workshop focused primarily on issues related to climate change and global warming; however other topics such as invasive alien species (IAS) management, legislation frameworks and stakeholder involvement were also examined.

The workshop is financially supported by the Netherlands Funds-in-Trust at the World Heritage Centre and the Norwegian Ministry of Foreign Affairs.