The List The Historic Centre (Chorá) with the ...
Print

The small island of Pátmos in the Dodecanese is reputed to be where St John the Theologian wrote both his Gospel and the Apocalypse. A monastery dedicated to the ‘beloved disciple’ was founded there in the late 10th century and it has been a place of pilgrimage and Greek Orthodox learning ever since. The fine monastic complex dominates the island. The old settlement of Chorá, associated with it, contains many religious and secular buildings. 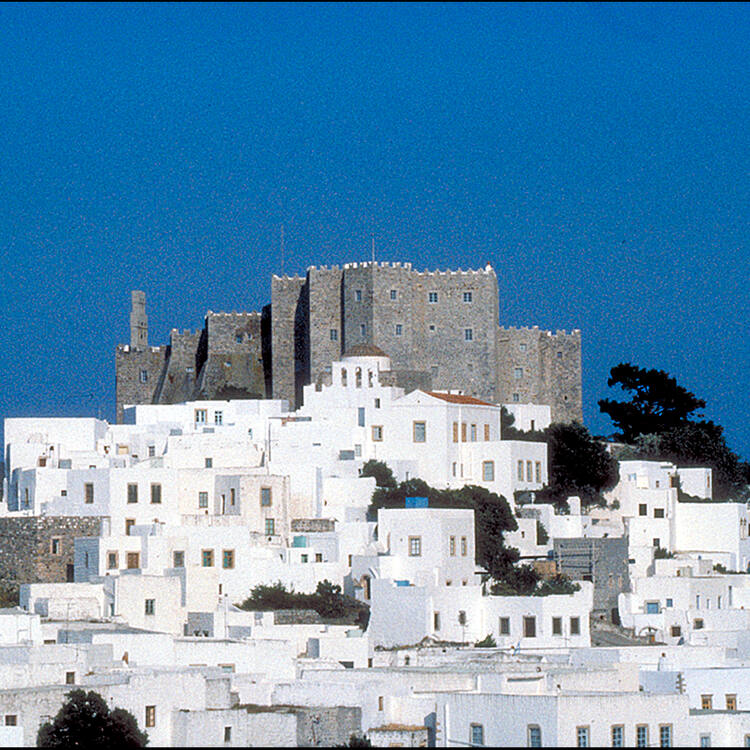 The small island of Pátmos in the Dodecanese is reputed to be where Saint John the Theologian wrote both his Gospel and the Apocalypse around 95 AD. A monastery dedicated to the ‘beloved disciple’ was founded there in 1088 by Hosios Christodoulos Latrinos and has been a place of pilgrimage and Greek Orthodox learning ever since. Its foundation was part of Emperor Alexios I Komnenos’ policy to colonize the islands and create a base in the Aegean. The colonization of the Chóra of Pátmos took place gradually around the fortified monastic complex, which always had the absolute dominance over the island as the main governor and regulator of the organization of the social life of the islanders.

The monastery of St John the Theologian is a unique creation, integrating monastic values within a fortified enclosure, which has evolved in response to changing political and economic circumstances for over 900 years. It has the external appearance of a polygonal castle, with towers and crenellations. It is also home to a remarkable collection of manuscripts, icons, and liturgical artwork and objects.

The earliest elements, belonging to the 11th century, are the Katholikón (main church) of the monastery, the Chapel of Panagía, and the refectory. The north and west sides of the courtyard are lined with the white walls of monastic cells and the south side is formed by the Tzafara, a two-storeyed arcade of 1698 built in dressed stone, whilst the outer narthex of the Katholikón forms the east side.

Midway along the road that winds steeply up from Skála to Chorá is the Cave of the Apocalypse (Spilaion Apokalypseos), where according to tradition St John dictated the Book of Revelation and his Gospel to his disciple Prochoros. This holy place attracted a number of small churches, chapels, and monastic cells, creating an interesting architectural ensemble.

The old settlement of Chóra, associated with it contains many religious and secular buildings. It is one of the best preserved and oldest of the Aegean Chorá. Beginning in the 13th century, the town was expanded by new quarters in the 15th century for refugees from Constantinople (the Alloteina) and in the 17th century from Crete (the Kretika). Paradoxically, perhaps, Patmos thrived as a trading centre under Ottoman occupation, reflected by fine merchants’ houses of the late 16th and 17th centuries in Chorá. The town contains a number of fine small churches. Dating mostly from the 17th and 18th centuries, they contain important mural paintings, icons, and other church furnishings.

The elements of the property are unique in several ways, considered both as an ensemble and individually. Pátmos is the only example of an Orthodox monastery integrating from its origins a supporting community, the Chorá, built around the hill-top fortifications. While fortified monasteries may be found in other parts of the Orthodox world, the Monastery of Hagios Ioannis Theologos is the only example in Greece of an organized settlement around a fortified monastic complex.

Criterion (iii): The town of Chóra on the Island of Pátmos is one of the few settlements in Greece that have evolved uninterruptedly since the 12th century. There are few other places in the world where religious ceremonies that date back to the early Christian times are still being practised unchanged.

Criterion (iv): The Monastery of Saint Ioannis Theologos (Saint John the Theologian) and the Cave of the Apocalypse on the Island of Pátmos, together with the associated medieval settlement of Chóra, constitute an exceptional example of a traditional Greek Orthodox pilgrimage centre of outstanding architectural interest.

Criterion (vi): The Monastery of Saint Ioannis Theologos and the Cave of the Apocalypse commemorate the site where Saint John the Theologian (Divine), the “Beloved Disciple”, composed two of the most sacred Christian works, his Gospel and the Apocalypse.

The boundaries of the property are adequate to maintain the Outstanding Universal Value of the property. The monastic complex of Saint John the Theologian, the cave of the Apocalypse and the settlement of Chóra itself maintain their basic morphology to the present day. The initial forms have been maintained. The settlement, which developed gradually around the monastery, is still inhabited and continues to be extended but always within specified boundaries and under the strict control and regulations of the appropriate authorities. The alterations that have taken place through the ages and under the influence of the historical conditions allow the visitor to see even today the distinct phases. The principal risks to the property are likely to arise from tourism and the over development of the port of Skála in the property’s wider setting; Pátmos is also in an earthquake zone.

The active monastic community of Pátmos, apart from safeguarding the artistic and intellectual treasures of the monastery, continues to rescue old traditions and rituals such as the Byzantine ritual of Niptir, which takes place every Wednesday of the Holy Week and revives the dramatic and symbolic event that marks the beginning of the Passion of Christ. Moreover, the activities of the Patmiada School since 1713, one of the most prominent Greek schools, contribute to the survival of authenticity.

The material fabric and design features of the significant elements and their organizational patterns have been well maintained and provide an authentic and credible expression of the property’s stylistic and typological models. The authenticity of the settlement is also ensured by the retention of its morphological features and its building techniques with the use of similar or even the same, as far as this is possible, traditional methods and materials in building new constructions.

The property is protected by the provisions of the Archaeological Law 3028/2002 “On the Protection of Antiquities and Cultural heritage in general”, and by separate ministerial decrees published in the Official Government Gazette. Protection and management are carried out by the Ministry of Culture, Education and Religious Affairs through the responsible regional service (Ephorate of Antiquities of the Dodecanese).

The authentic character of the settlement at Chóra of Pátmos survives due to the protective legislative regulations (ministerial decisions published in the Official Government Gazette) implemented in the area already since 1948 when the island of Pátmos was integrated to the Hellenic state. Any intervention in the area is prohibited without the approval of the Ephorate of Antiquities of the Dodecanese.

Effective site management is also achieved through cooperation between secular and ecclesiastical authorities in all areas of common concern. Their efforts have ensured that many of the tourism abuses found in other parts of the Aegean have been avoided, preserving the tranquillity appropriate to the sacred values of Pátmos.

In recent years, the following works have been completed through the European Union funding: a) the restorations of two complexes in Chóra, that of Nikolaides’ mansion and the monastery of Zoodochos Pege and b) the conservation of the monastic complex of the Apocalypse.