Before the Roman annexation of Numidia, the town of Thugga, built on an elevated site overlooking a fertile plain, was the capital of an important Libyco-Punic state. It flourished under Roman and Byzantine rule, but declined in the Islamic period. The impressive ruins that are visible today give some idea of the resources of a small Roman town on the fringes of the empire. 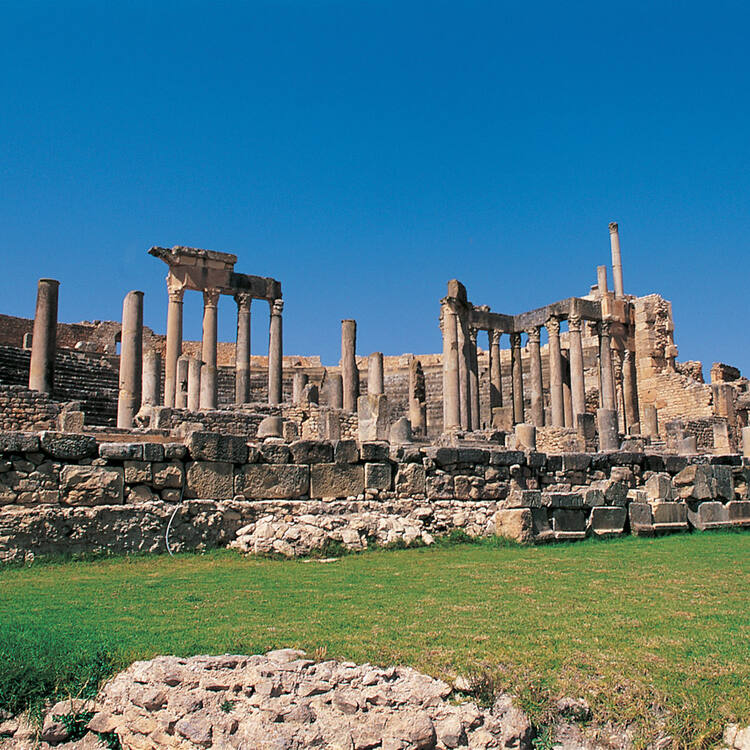 The archaeological site of Thugga/Dougga is located in the North-west region of Tunisia, perched on the summit of a hill at an altitude of 571 m, dominating the fertile valley of Oued Khalled. Before the Roman annexation of Numidia, Thugga had existed for more than six centuries and was, probably, the first capital of the Numidian kingdom. It flourished under Roman rule but declined during the Byzantine and Islamic periods. The impressive ruins which are visible today give an idea of the resources of a Romanised Numidian town.

The archaeological site covers an area of approximately 75 ha. These ruins of a complete city with all its components are a testimony to more than 17 centuries of history. They are an outstanding example illustrating the synthesis between different cultures: Numidian, Punic, Hellenistic, and Roman. The Roman monuments were integrated within the urban fabric, essentially Numidian. Despite its relative unimportance in the administrative structure of the Roman province of Africa, Dougga possesses a remarkable group of public buildings, dating for the most part from the 2nd and 3rd centuries A.D. Dougga is considered the best preserved example of an Africo-Roman town in North Africa. As such, it is an exceptional illustration of what daily life was like in Antiquity.

Criterion (iii): The important epigraphic collection (over 2000 Libyan, Punic, bilingual, Greek and above all Latin inscriptions) has made a decisive contribution to the decipherment of the Libyan language and knowledge of the social and municipal life of the Numidians, testifying to the level of development attained by the city during the 3rd and 2nd centuries BC.

Over approximately two and a half centuries, two legally distinct communities, one comprising an indigenous population and the other a community of settlers who were Roman citizens, coexisted in the same town and on the same territory. They both equally participated in the development and flourishing of the city.

Whilst retaining its largely Numidian urban fabric, Thugga therefore took on the aspect of a Roman monumental city. In this respect, it constitutes a representative example of a Maghreb city under the Numidian kings and during the first centuries of the Roman Empire.

In comparison to similar sites in North Africa, the ruins of the Roman and pre-Roman city of Thugga are surprisingly complete and well preserved. Consequently, they illustrate in an exceptional manner what daily life was like in a small provincial town during the Roman period.

Within its boundaries, the archaeological site of Dougga conserves, in its entirety, the vestiges of the different periods of the Antique city with all its components: the monumental centre (capitol, forum, market, Rose of the winds square, etc.), entertainment buildings (theatre, circus) and public baths, clearly reflecting the way an indigenous foundation evolved during the Roman period

The state of conservation of these monuments is also exceptional. The level of authenticity of the archaeological remains is very high and has not been affected by restoration activities and conservation interventions over the past century because they have been minimal and were carried out in conformity with the principles of the 1964 Venice Charter. However, there are some exceptions. The authenticity of the Libyco-Punic mausoleum reconstructed between 1908 and 1910 has long remained subject of debate (although it might be argued that this monument has retained its own historicity).

In addition to the many monuments benefiting from a specific listing as historic monuments, the archaeological site of Dougga is protected by Law 35-1994 of 24 February 1994 concerning the protection of archaeological and historical heritage and traditional arts (Heritage Code), as well as by Law 83-87 of 11 November 1983 concerning the protection of agricultural land, modified and completed by Law 90-45 of 23 April 1990 and by Law 96-104 of 25 November 1996.

A proposal for the boundary of the site of Dougga was submitted to the National Heritage Commission for the creation of the Cultural site of Dougga and its landscape. The study for the development of the Protection and Enhancement Plan (PPMV) for the site, as defined by the Heritage Code, was completed. This legal tool shall enable the control of all interventions undertaken at the site and in the surrounding buffer zone of 200 m. In addition to prohibited activities or those only authorised under certain conditions, it defines the different implementation mechanisms. The PPMV is the management tool that guarantees the preservation of the archaeological site of Dougga and enables the control of all eventual modifications in its immediate environment.