The List Archaeological Park and Ruins of Quirigua
Print

Inhabited since the 2nd century A.D., Quirigua had become during the reign of Cauac Sky (723–84) the capital of an autonomous and prosperous state. The ruins of Quirigua contain some outstanding 8th-century monuments and an impressive series of carved stelae and sculpted calendars that constitute an essential source for the study of Mayan civilization. 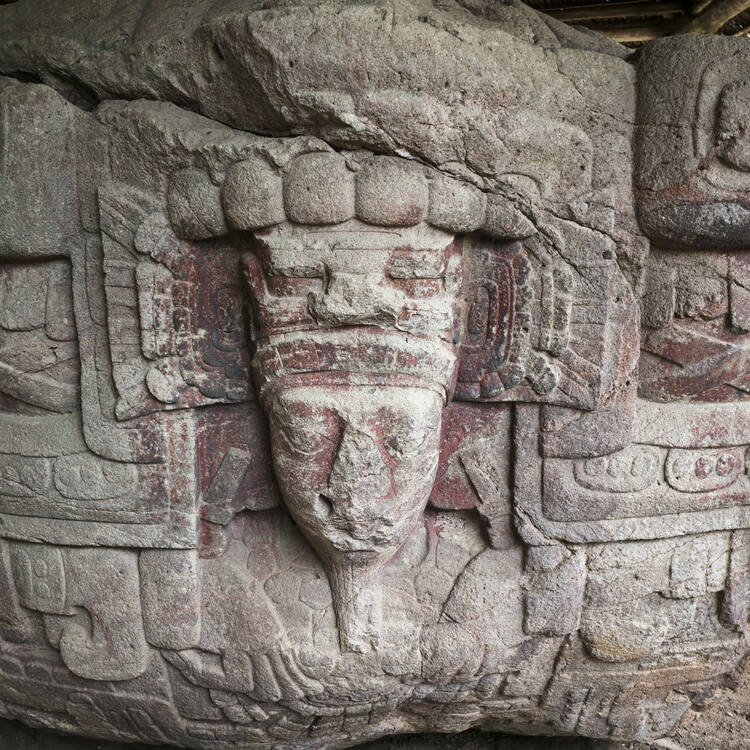 The Archaeological Park and Ruins of Quirigua is located in the Department of Izabal in Guatemala. The inscribed property is comprised of 34 hectares of land dedicated exclusively to the conservation of the ancient architecture and the seventeen monuments that were carved between 426 AD and 810 AD and make up this great city.

Quirigua is one of the major testimonies to the Mayan civilization. For reasons which are not clear, it then entered a period of decline. It is known that, at the time of the arrival of the European conquerors, the control of the jade route had been taken over by Nito, a city closer to the Caribbean coast. Although Quirigua has retained ruins and vestiges of dwellings ranging  between AD 200 and AD 900, most of the monuments that ensure Quirigua its world-wide reknown date from the 8th century, the period during which the city was entirely remodelled in accordance with its function as royal residence and administrative centre.

At the core of Quiriqua is the Great Plaza, the largest known public space in the entire Maya area. The monumental complexes which are set out around the Great Plaza, the Ceremonial Plaza and the Plaza of the Temple are remarkable for the complexity of their structure - a highly elaborate system of pyramids, terraces, and staircases which results in a complete remodelling of the natural relief and which creates a singular dimension as at Copan.

The artful production of monolithic stone monuments, carved in sandstone without the use of metal tools, is outstanding. The monuments, called stelae, contain hieroglyphic texts describing significant calendar dates, celestial events such as eclipses, passages of Maya mythology and political events, as well as important social and historic events to the development of the city.  Not only does this text give a better understanding of the rise and fall of Quirigua, but also describes the span of time between 426 AD to 810 AD making it possible to reconstruct parts of Mayan history. During its brief time of erecting stelae, Quirigua was one of only two cities to regularly erect monuments marking the end of five-year periods.

Criterion (i) :  The monuments of the Archaeological Park and Ruins of Quirigua are an outstanding example and the largest corpus of Maya art masterpieces. They are an advanced representation of artistic skill by their sculptors and the meaning and beauty of each piece has survived the passing of this civilization, making them universal masterpieces.

Criterion (ii): The monuments of the Archaeological Park and Ruins of Quirigua were carved during the Classical Period dating from 250 AD to 900 AD.  Between the times of 700 AD to 850 AD arose and flourished a style of art known as "The school of Motagua".  This style is seen in the monuments of Quirigua and which in turn had a strong influence over the art production in the Maya area of Copán (Honduras) and Belize.

Criterion (iv) :  The Archaeological Park and Ruins of Quirigua contain some outstanding 8th-century monuments and an impressive series of carved stelae and sculpted calendars that constitute an essential source for the study of Mayan civilization. The ruins of Quirigua retain an impressive series of stelae and sculpted calendars, partially deciphered, which constitute a remarkable and unique source of the history of the social, political and economic events of the Mayan civilization. The zoomorphic and anthropomorphic sculptures are among the most attractive pre-Columbian works known.

All attributes that express the Outstanding Universal Value of the Archaeological Park and Ruins of Quirigua are duly protected within the boundaries of the inscribed property, an area of 34 hectares, allowing for the highest level of conservation. Each of the monuments, true masterpieces of Maya art, is found in situ and in harmony with the surrounding natural and cultural environments.

Protection measures have been taken over the years to prevent damage caused by human development and neglect. However the close proximity to the Motagua River and the geological fault by the same name, make the World Heritage property vulnerable to natural disasters, for which preventive measures have also been taken to have the greatest control over environmental factors.

The monuments that make up Quirigua include stelae, altars and zoomorphic sculptures (animal-shaped sculpture), carved in sandstone and used to honour the Mayan rulers of Quirigua.   Each monument captures the rulers’ image and is accompanied by hieroglyphic text with dates as well as mythical, historical and political events. All reflected in high relief in the style of the "the School of Motagua" showcasing the highest level of artistic development found in Maya art. The conditions of form and design, materials and substance have been maintained and conservation interventions have been kept to the minimal.

The Archaeological Park and Ruins of Quirigua are protected by the Constitution of the Republic of Guatemala and the Law for the Protection of National Cultural Heritage and Protected Areas Act, among other legal tools. Likewise, the State Party has ratified several international conventions for the protection of cultural heritage on the whole.

The property has a Management Plan which has been in effect since 2008 and will last until 2012 which was prepared by the Ministry of Culture and Sports of Guatemala, the entity in charge of the site. This plan includes fifteen cultural objectives and eight natural targets each of which have specific actions for the protection, conservation and promotion of the cultural and natural heritage of the park in the short, medium and long term and include community participation.

The biggest challenge in the protection of the Archaeological Park and Ruins of Quirigua is minimizing the damage caused by flooding, as occurred in 1998 and 2010.  Financial support is currently being sought and managed to build new facilities to adequately protect the cultural property as a whole and more specifically, the individual protection of the seventeen monuments.  The new designs for better shelters have recently been developed and actions are being taken to put in place. 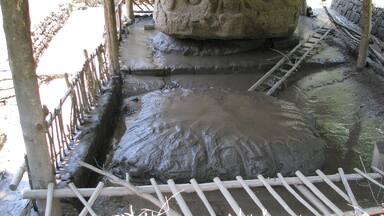