The List Necropolis of Bet She’arim: A Landmark of ...
Print

Necropolis of Bet She’arim: A Landmark of Jewish Renewal

Necropolis of Bet She’arim: A Landmark of Jewish Renewal

Consisting of a series of catacombs, the necropolis developed from the 2nd century AD as the primary Jewish burial place outside Jerusalem following the failure of the second Jewish revolt against Roman rule. Located southeast of the city of Haifa, these catacombs are a treasury of artworks and inscriptions in Greek, Aramaic, Hebrew and Palmyrene. Bet She’arim bears unique testimony to ancient Judaism under the leadership of Rabbi Judah the Patriarch, who is credited with Jewish renewal after 135 AD. 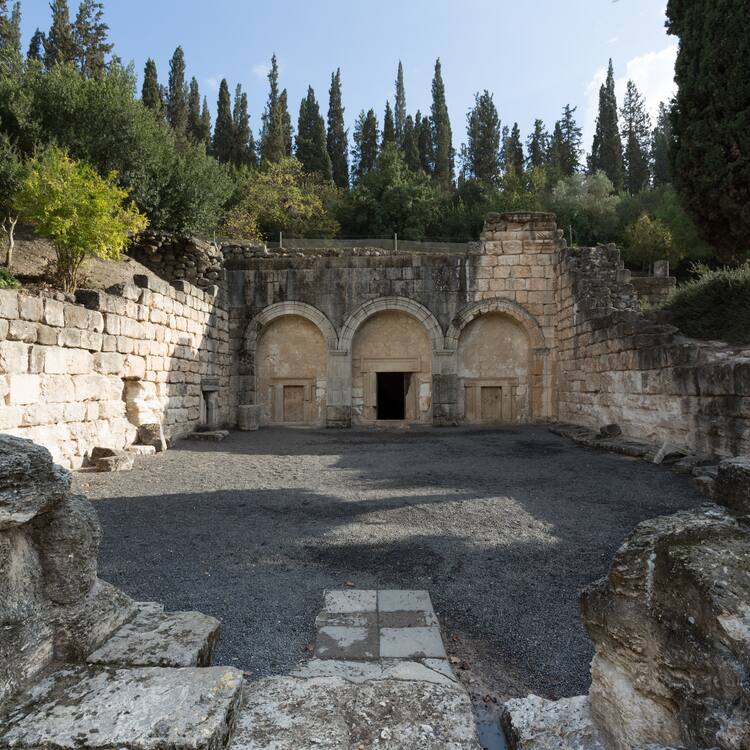 Hewed into the limestone slopes of hills bordering the Vale of Jezre’el, a series of man-made catacombs was developed from the 2nd century AD as the necropolis of Bet She’arim. It became the primary Jewish burial place outside Jerusalem following the failure of the second Jewish revolt against Roman rule and the catacombs are a treasury of eclectic art works and inscriptions in Greek, Aramaic, Hebrew and Palmyrene. Bet She’arim is associated with Rabbi Judah the Patriarch, the spiritual and political leader of the Jewish people who composed the Mishna and is credited with Jewish renewal after 135 AD.

Criterion (ii): The catacombs of Bet She’arim show the influence of classical Roman art including human images, inscriptions and decorative details and include iconographic motifs and multi-language inscriptions testifying to cross-cultural interaction with  the Greco-Roman artistic cultural world of Europe, Asia Minor and Mesopotamia and the Jewish cultural world. The assimilation of burial types and artistic expression together with inscriptions indicating the origins of those buried in the cemetery testify to the wide dispersal of the Jewish people at that time and the incorporation into Jewish religious culture of influences from the surrounding populations.

Criterion (iii): The necropolis of Bet She’arim constitutes exceptional testimony to ancient Judaism in its period of revival and survival under the leadership of Rabbi Judah the Patriarch. The extensive catacombs containing artwork showing classical and oriental influences illustrate the resilient Jewish culture that flourished here in the 2nd to 4th centuries AD.

The property includes all elements necessary to convey the Outstanding Universal Value and is of adequate size to ensure the complete representation of the features and processes which convey its significance. The property does not suffer from adverse effects of development or neglect.

The catacombs themselves, preserved in-situ, retain authenticity in terms of location, setting, form and materials. In terms of use and function, the catacombs had ceased to be used for burial purposes by the 6th century, were abandoned and subsequently neglected. Today they are preserved as part of a national park with some open to the public.

The property is protected as an Antiquities Site under the Antiquities Law 1978. No changes can be made without the approval of the Israel Antiquity Authority (IAA). The property and buffer zone are already protected under the National Parks, Nature Reserves, Heritage and National Sites Law, 1998. Paragraph 25 of the Law prohibits any activity, which could in the opinion of the Authority, hinder the designation of the area; it empowers the INPA to take steps against violations of that Law. The northern part of the property and the buffer zone within the jurisdiction of Qiryat Tiv’on Local Council is approved as a national park according to the statutory plan and will shortly be declared officially as a National Park. The southern part within the jurisdiction of Emek Yizreal Regional Council is currently designated as “approved national park at detailed planning” and will be officially declared as a National Park as soon as possible. Meanwhile the buffer zone is protected by Land Use statutory plans while the property and buffer zone are further protected and managed by the Israel Nature and Parks Authority (INPA) by virtue of the National Parks, Nature Reserves, Heritage and National Sites Law, 1998.A World Heritage Forum within INPA headed by INPA director general and the director of the Archaeology and Heritage department includes directors of the various divisions of INPA, directors of district offices of INPA and of nature reserves and national parks containing World Heritage sites. This Forum convenes every six months to discuss issues pertaining to these sites.
News