Historic Bridgetown and its Garrison, an outstanding example of British colonial architecture consisting of a well-preserved old town built in the 17th, 18th and 19th centuries, which testifies to the spread of Great Britain's Atlantic colonial empire. The property also includes a nearby military garrison which consists of numerous historic buildings. With its serpentine urban lay-out the property testifies to a different approach to colonial town-planning compared to the Spanish and Dutch colonial cities of the region which were built along a grid plan. 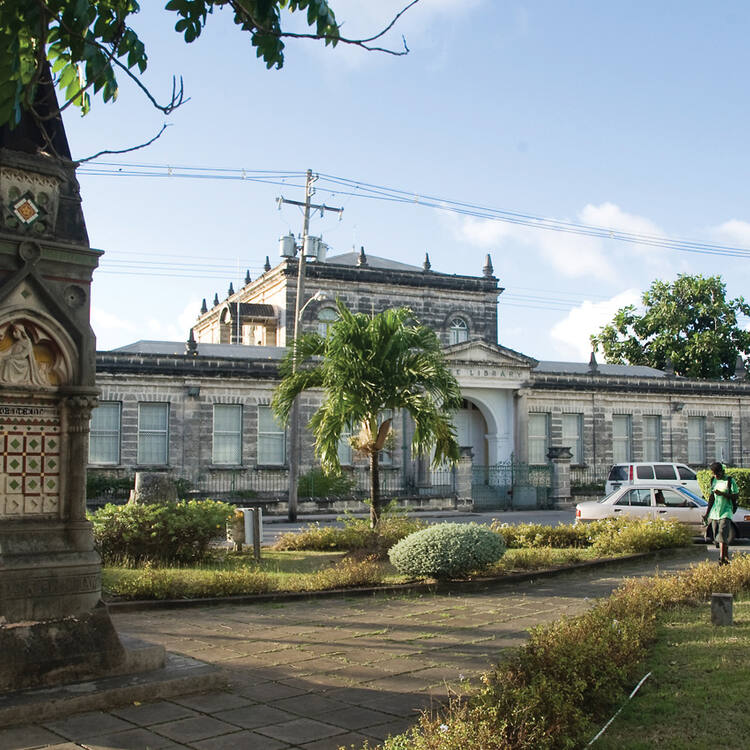 Historic Bridgetown and its Garrison (Barbados) © Government of Barbados

As one of the earliest established towns with a fortified port in the Caribbean network of military and maritime-mercantile outposts of the British Atlantic, Historic Bridgetown and its Garrison was the focus of trade-based English expansion in the Americas. By the 17th century, the fortified port town was able to establish its importance in the British Atlantic trade and became an entrepôt for goods, especially sugar, and enslaved persons destined for Barbados and the rest of the Americas.

Historic Bridgetown’s fortified port spaces were linked along the Bay Street corridor from the historic town’s centre to St. Ann’s Garrison. The property’s natural harbour, Carlisle Bay, was the first port of call on the trans-Atlantic crossing and was perfectly positioned as the launching point for the projection of British imperial power, to defend and expand Britain’s trade interests in the region and the Atlantic World. Used as a base for amphibious command and control, the garrison housed the Eastern Caribbean headquarters of the British Army and Navy. Historic Bridgetown and its Garrison participated not only in the international trade of goods and enslaved persons but also in the transmission of ideas and cultures that characterized the developing colonial enterprise in the Atlantic World.

Criterion (ii): Historic Bridgetown and its Garrison had a pivotal role in the development of the English colonies in the Atlantic World and was a centre for transmission of ideas concerning administration, trade, communications, science, culture and technology in the British Empire. While the Garrison can be said to have absorbed military ideas from Europe and transmitted them to other areas of the Caribbean, the social stratification of Bridgetown illustrates the interchange of several occupational, religious, ethnic, free and enslaved groups; a meeting of cultures, which created a hybridized Creole culture in the Anglophone Caribbean. This hybridized culture, which did not wholly abandon either European or African ways, lives on in the ways in which the urban space functions today.

Criterion (iii): Historic Bridgetown and its Garrison is an exceptional testimony of British colonial trade and defence in the Caribbean and the Americas. The historic town has retained its original footprint, based on its English medieval serpentine street layout, for almost 400 years, which bears exceptional testimony to British town layouts in foreign soil. St. Ann’s Garrison and its fortifications, which protected the town and its port, constitute the most complete complex of a 18th-19th century British garrison ensemble in the Atlantic World. As an integrated semi-planned urban landscape, with a strong brick architectural testimony, and a collection of colonial warehouses and dock facilities, it has remained essentially unchanged for 200 years, and provides an outstanding glimpse into a pivotal period of British imperial rule and culture.

Criterion (iv): St Ann’s Garrison is the earliest type of British navy and army base in the Caribbean and in its architectural layout and urban composition influenced later British presence in the region. The relation between the Historic Bridgetown and its Garrison is characterized by urban and architectural elements, which illustrate the continuous interaction between the commercial and military interests that dominated the evolution of functions in the colonial and post-colonial space. This is most evident in the tension between military order and economic resourcefulness, expressed among other by the Screw Dock, an outstanding but highly vulnerable structure, and the 18th and 19th century warehouses, built to withstand hurricanes and other threats in the tropical environment.

The property covers the area that reflects the layout of the early town and port in Bridgetown and the overall Garrison, with all its historic components. These two elements are linked by a narrow strip along Bay Street, which creates the urban relation between the garrison, the city and the port. Within Bridgetown, the early 17th century path and road network still forms the basis of the organic street layout. The port area has been altered but provides traces to its historic use. The Garrison has retained a high percentage of its physical attributes, with exception of the naval dockyard, representing a significant era of British colonial military heritage. The basic road network of the garrison has not changed and also its boundary wall remains largely intact, with entrances to the site remaining in their original locations.

Bridgetown’s early serpentine street and alley configuration and also the roads in the Garrison retain their authentic networks. Both layouts continue in spite of the town’s transformation from a maritime-mercantile fortified port town to a contemporary cosmopolitan tropical city which has remained the island’s capital and national centre. Although several historic houses in Bridgetown have been replaced or restored, a significant number of remaining historic houses, some rapidly decaying, significantly contribute to the atmosphere of a historic city and should be conserved.

Within the Garrison, the main individual barracks and administrative buildings retain a high degree of authenticity and continue to provide similar functions as they did during the colonial era. Yet, the degree to which the overall garrison can convey its meaning in terms of former function is vulnerable and requires constant protection.

Legal protection is provided by the Town and Country Planning Act, supported by the Physical Development Plan Amended (2003). The Physical Development Plan makes provision for five conservation areas covering different parts of Historic Bridgetown and its Garrison. While at present these planning provisions are technically adequate, legal protection of those parts of the property not covered by the conservation areas could be strengthened.

The highest level of policy decision-making for Historic Bridgetown and its Garrison is public sector-led through the Cabinet of the Government of Barbados, which holds ultimate responsibility for the management of the property. Management authority has been formally conferred on the Barbados World Heritage Committee. Through a coordinative function of this Committee, the management is shared among the respective responsible government agencies and also involves the collaborative effort of several non-governmental organizations and civil society, including a number of property owners.

The Chief Town Planner has been identified as the Site Manager for day-to-day management concerns in the framework of the urban development plan and planning permission procedures. He also chairs the Barbados World Heritage Committee which meets on a two-monthly basis. Thematic subcommittees meeting at shorter intervals are dedicated to specific areas of management, including education and capacity building, conservation of architectural heritage, interpretation and tourism management. Further work, as defined in the action plan, is required to strengthen the protection of the substance of remaining historic buildings and the property’s overall spatial layout, and also to mitigate landscape changes that have already occurred in order to protect and strengthen the property’s integrity and authenticity.