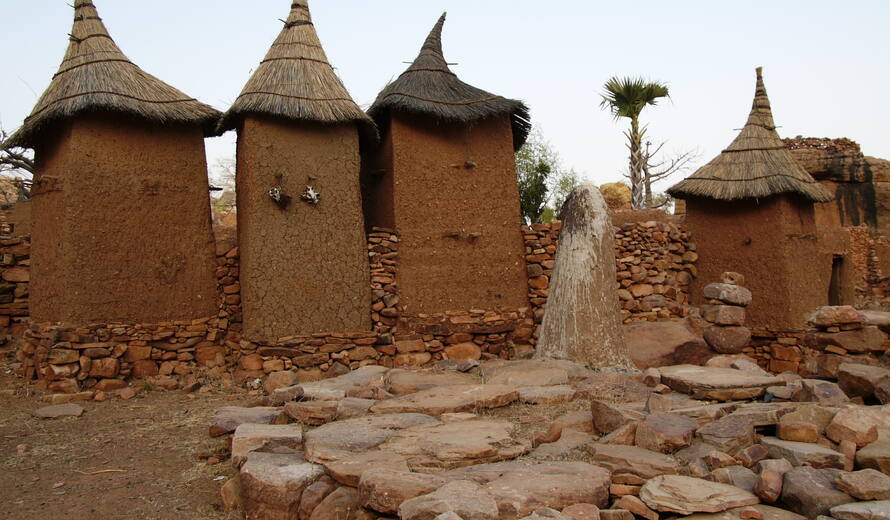 Cliff of Bandiagara (Land of the Dogons), Mali © OUR PLACE The World Heritage Collection / Pall Stefansson

UNESCO will support the social cohesion and resilience of communities suffering from years of armed conflict in central Mali as part of a major new project, made possible through USD 1 million in funding from the International Alliance for the Protection of Heritage in Conflict Areas (ALIPH).

The project will provide critical support to the rehabilitation of the World Heritage site of “Cliff of Bandiagara (Land of the Dogons)”, home to 289 villages spread over 400,000 hectares in the country’s Mopti Region.

“Culture is not only all too often a victim of protracted armed conflicts – it is also a critical source of resilience and an important foundation for peacebuilding,” said UNESCO's Director-General, Audrey Azoulay. “Through this new project, in collaboration with the Malian authorities and with funding from ALIPH, we aim to place culture at the heart of efforts to support the communities that call this area home.”

The three-year project in Bandiagara aims to rehabilitate damaged architectural heritage, notably housing, granaries and sites dedicated to traditional culture, as well as to restore the production of cultural objects, and safeguard ceremonial objects in a memorial collection.

Through the rehabilitation and safeguarding of the region’s cultural practices, the project will help reinforce the social fabric, and build social cohesion and peace among the communities of the Dogon country.  Income generation activities for women are central to this project to promote reconciliation between communities and foster the protection of heritage in the challenging context of the COVID-19 pandemic.

In 2012, Mali became the epicentre of a large-scale political and security crisis driven by the arrival of armed groups in the northern and central parts of the country. In addition to claiming civilian lives and creating insecurity, the crisis caused the total or partial destruction of close to 30 villages, of which half are located within the boundaries of the World Heritage property of the Cliff of Bandiagara (Land of the Dogon). The destruction of the villages resulted in significant damage to or loss of numerous traditional buildings and cultural objects, and the deterioration of cultural practices and traditions of the Dogon, Peuls, Bozo, Bambara and Sonrhai groups. The gradual disappearance of such cultural practices as traditional funerary rituals, and masked dances, as well as the Yaaral and the Degal festivities fueled intercommunal strife.

“ALIPH was established in 2017, in part as a response to the destruction of Mali’s cultural heritage,” said Dr Thomas S. Kaplan, ALIPH Chairman. “Our partnership with UNESCO and Malian authorities constitutes a concrete, ambitious plan to save cultural heritage treasures that have been endangered by conflict. This joint effort is guided by the collective conviction that cultural heritage plays a critical role in building social cohesion and, ultimately, peace.”

UNESCO experts will work closely with a team of Malian experts from the Ministry of Culture, the National Direction of Cultural Heritage (DNPC), the Cultural Mission of Bandiagara (BCM), and the United Nations Multidimensional Integrated Stabilization Mission in Mali (MINUSMA), alongside local communities. The intervention in Bandiagara builds on UNESCO’s rehabilitation initiatives in Mali since 2012, and the evaluation and mediation work carried out in 2019 following spiralling inter-communal violence in the area.

The Cliff of Bandiagara is a vast cultural landscape covering 400,000 hectares across three natural regions: sandstone plateau, escarpment, and plains. The communities have a very close relationship with their environment, which is expressed in sacred rituals and traditions. The property was inscribed on UNESCO's World Heritage List in 1989.