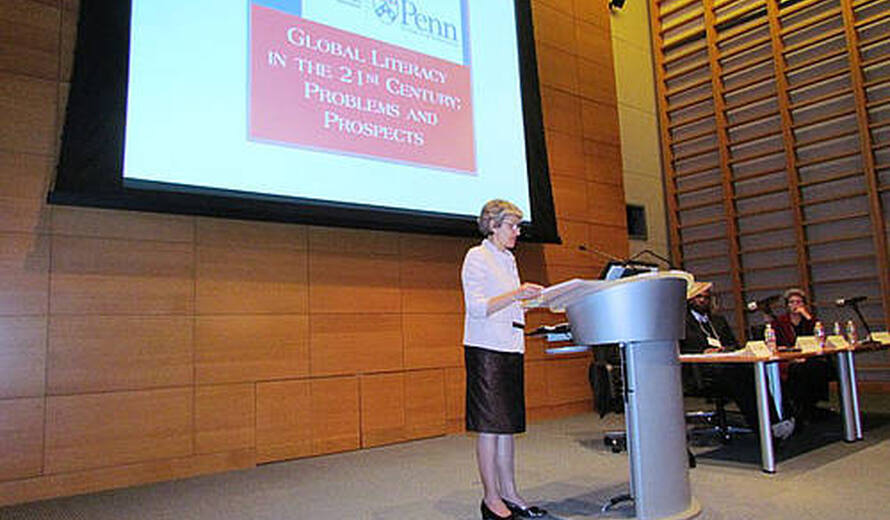 World Heritage and literacy were bookends to a day where Philadelphia opened its arms to UNESCO, during the second day of Director-General Irina Bokova’s visit to the United States on Thursday.Secretary of the Interior Ken Salazar joined the Director-General to celebrate the 40th Anniversary of the World Heritage Convention at morning ceremonies held at Independence Hall, where in 1776 the Declaration of Independence was signed.   Two centuries later, the Hall was the first U.S. site on the list of World Heritage in 1979.  “World Heritage sites are not only about places, but also ideas,” said Salazar.  “Independence Hall was added to the list for its universal principals of freedom and democracy.”

Secretary Salazar also emphasized the important role that the 21 World Heritage Sites in the U.S will play as the Obama Administration launches America is Open for Business, an effort to make the U.S. the number one tourism destination in the world.  According to the Secretary, 7 million tourism related jobs are created every year in the U.S.

Also in attendance were U.S. Deputy Assistant to the Secretary of State Nerissa Cook and Congressman Chaka Fatah, who praised UNESCO for its work in preserving cultural heritage.  In her comments, the Director General emphasized world heritage as an ongoing responsibility.  “Heritage is a powerful force for social and economic development and tourism, worth several billions of dollars in capital, trade, and visits.  All of this requires commitment.  The protection of sites of outstanding universal value is a shared responsibility,” she said.

In order to assist other countries in their work on preservation, conservation and restoration, the National Parks Service has taken the initiative to create a World Heritage Fellowship program.  The program brings individuals responsible for world heritage in their own country to the U.S. where they work alongside American counterparts.  The U.S. was the first country to sign the World Heritage Convention.

Later in the day, the scene shifted to the University of Pennsylvania where the Director General participated in a series of events related to the Organization’s strong partnership on literacy with the university. This included the inauguration of Professor Dan Wagner as the newest UNESCO Chair in Learning and Literacy and giving the keynote address at a symposium on “Global Literacy in the 21st Century: Problems and Prospects.”  The Director-General said while progress has been made, there are numerous challenges that must still be overcome.  “The fact is gender disparities remain persistent, with little change over time.  There are over a dozen countries in sub-Saharan Africa where the female literacy rate is under 50 percent.  In several cases, it is under 20 percent. Imagine what this means in terms of deprivation, in terms of vulnerability to poor health and exploitation, in terms of mothers sending – or not - their daughters to school.”

UNESCO and UPENN also formalized a summer internship program that that will give students an opportunity to serve and learn at UNESCO field offices, supporting all of the Organization’s mandates.

The Director-General is on a 10 day mission to the United States addressing three major themes: