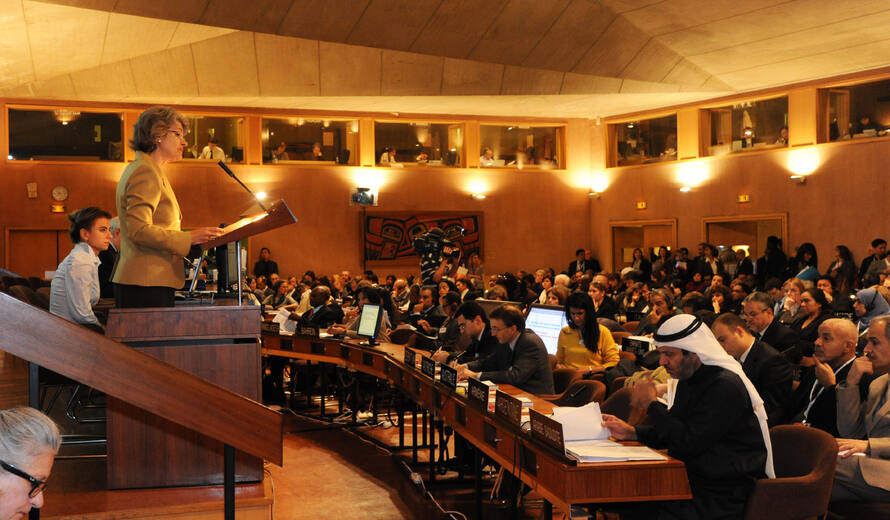 The Director-General of UNESCO Irina Bokova today launched the 40th anniversary celebrations for the Convention Concerning the Protection of the World Cultural and Natural Heritage, adopted by UNESCO's Member States on 16 November 1972.

In her address, the Director-General called for a year of renewal for World Heritage. "Heritage stands at the crossroads of climate change, social transformations and processes of reconciliation between peoples. Heritage carries high stakes - for the identity and belonging of peoples, for the sustainable economic and social development of communities."

Irina Bokova stressed that the Rio+20 United Nations Conference on Sustainable Development in June 2012 would provide UNESCO a new opportunity to advocate linking culture and development. She argued that "heritage does not represent luxury; it is a capital investment in the future. It is the sound foundation without which nothing lasting can be built. Disregarding heritage, severing our root, will inevitably clip our wings."

Speaking at the opening of the General Assembly of the Convention's 187 States Parties, the Director-General stressed the need to involve communities in heritage preservation. She recommended reflection, as well as celebration, to involve all stakeholders in the anniversary whose theme is: World Heritage and Sustainable Development the Role of Local Communities.

The General Assembly of States Parties to the World Heritage Convention takes place every two years in Paris and coincides with the sessions of UNESCO's General Conference, the Organization's highest ruling body.

The opening ceremony of the 40th anniversary celebrations will take place at UNESCO Headquarters in Paris on 30 January 2012 with the participation of legendary jazz musician and UNESCO Goodwill Ambassador Herbie Hancock. Events are being organized around the world throughout the year to mark the occasion. A special event to close the year is being organised by the Government of Japan in Kyoto, from 6 to 8 November, 2012.