The Béguines were women who dedicated their lives to God without retiring from the world. In the 13th century they founded the béguinages , enclosed communities designed to meet their spiritual and material needs. The Flemish béguinages are architectural ensembles composed of houses, churches, ancillary buildings and green spaces, with a layout of either urban or rural origin and built in styles specific to the Flemish cultural region. They are a fascinating reminder of the tradition of the Béguines that developed in north-western Europe in the Middle Ages. 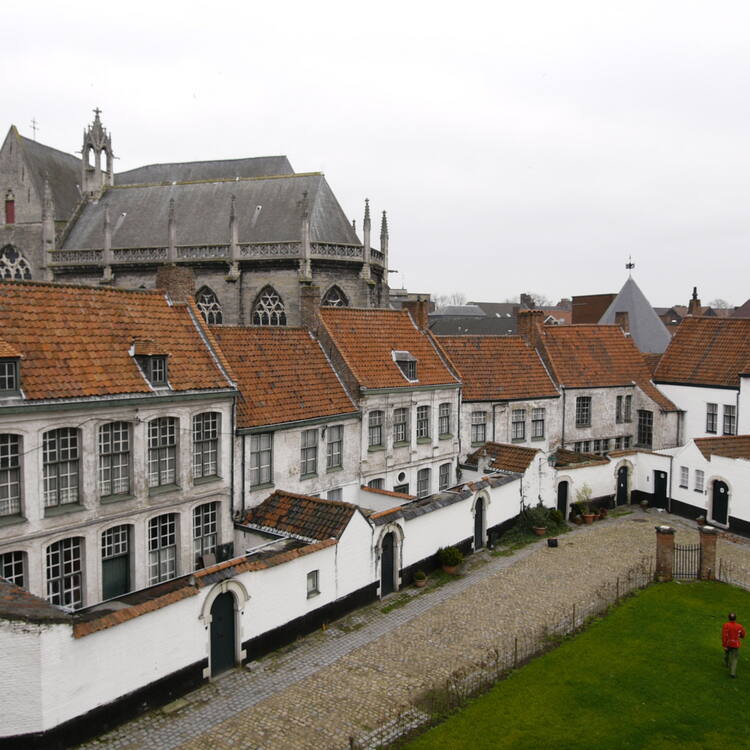 The Flemish béguinages are a series of 13 sites in the Flanders Region of Belgium. They bear extraordinary witness to the cultural tradition of the Beguines that developed in north-western Europe in the Middle Ages.

These Beguines were either unmarried or widowed women who entered into a life dedicated to God, but without retiring from the world. In the 13th century they founded the béguinages, enclosed communities designed to meet their spiritual and material needs.

The Flemish béguinages formed architectural ensembles, enclosed by walls or surrounded by ditches, with gates opening to the outside world during the day. Inside, they were composed of houses, churches, ancillary buildings, and green spaces organized in a spatial conception of urban or rural origin, and built in styles specific to the Flemish cultural region.

Criterion (ii): The Flemish béguinages demonstrate outstanding physical characteristics of urban and rural planning and a combination of religious and traditional architecture in styles specific to the Flemish cultural region.

Criterion (iii): The béguinages bear exceptional witness to the cultural tradition of independent religious women in north-western Europe in the Middle Ages.

Criterion (iv): The béguinages constitute an outstanding example of an architectural ensemble associated with a religious movement characteristic of the Middle Ages, associating both secular and conventual values.

The inscribed sites are the most representative béguinages of the Beguine tradition, identified on the basis of their historic and architectural development and their state of conservation. These 13 béguinages testify to their original function, even though many suffered damage during World Wars I and II. They have maintained their residential character as well as the configuration with church or chapel, streets or squares with community and individual houses etc. Today, most béguinages are still clearly defined components of the urban fabric, and considered havens of tranquillity, as they were in the past. In some places, the enclosed character is preserved, although many béguinages lost their enclosed aspect during the French period and the gates were removed. The boundaries of the inscribed areas are sufficient to include the attributes of Outstanding Universal Value, but many of the components have no buffer zone. The béguinages are generally in good condition.

The Beguine movement in Flanders is extinct, but most of the béguinages continue to be sought after as havens of peace and settings appropriate to a lifestyle that is a blend of community and private.

Removed from the lively historic centres, the béguinages preserved a respect for habitat as an essential function and have thus retained, apart from certain generally superficial modifications, the characteristic organization and simple functional architecture that gives them their particular atmosphere of a utopian setting, in which a sense of community and respect for individuality are finely balanced.

No complete construction remains from the Middle Ages, except for certain churches. The earliest Beguine houses were replaced by municipal ordinance by buildings of brick or stone in the 16th and, particularly, 17th centuries, although they generally followed the original layout and area. In the 17th century, the rising numbers of Beguines dictated further construction within the space originally available. In the 18th century, the number of Beguines declined and houses were demolished. New houses or buildings were incorporated into some béguinages in the 19th and 20th centuries.

The 13 Flemish béguinages are listed as monuments, sites or urban sites. In a number of cases, singular buildings such as the church or chapel have been listed separately.

Ownership of the béguinages is quite diverse: in some cases, there is a single owner (generally a local public welfare authority). Elsewhere, the ownership has fragmented to the point where almost every house has a different private owner, which complicates the development of a common management strategy. Nevertheless, as a consequence of the listed character of the béguinages, any intervention on a béguinage and its components has to be approved by the regional monuments and sites administration.

This is not the case for the surroundings of the béguinages, most of which are not protected. Still, the béguinages and their surroundings are generally situated as a whole or in part in planning zones of special cultural, historical, and/or aesthetic interest (CHE Zones), whose main objective is the conservation and development of cultural heritage. However, most béguinages lack a buffer zone. If a buffer zone was identified at the time of inscription, these are now mostly considered insufficient. Therefore, an evaluation is in order, which should suggest a correction and/or extension of the buffer zones of the béguinages and the development of appropriate protection for their settings.

A common management strategy and management system for the whole of the World Heritage property of the Flemish béguinages and for individual béguinages will need to be developed.