The wooden churches of southern Little Poland represent outstanding examples of the different aspects of medieval church-building traditions in Roman Catholic culture. Built using the horizontal log technique, common in eastern and northern Europe since the Middle Ages, these churches were sponsored by noble families and became status symbols. They offered an alternative to the stone structures erected in urban centres. 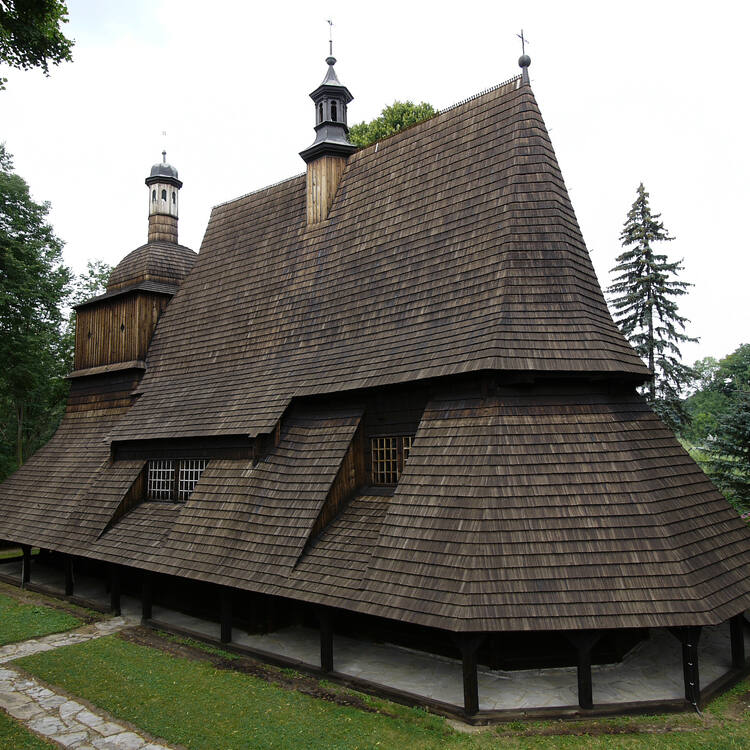 The Wooden Churches of Southern Małopolska constitute a serial inscription of the six best preserved and oldest wooden Gothic churches that are characteristic of this region. They are located in the towns and villages of Blizne, Binarowa, Dębno Podhalańskie, Haczów, Lipnica Murowana, and Sękowa, which lie within the historic region of Małopolska in southern and south-eastern Poland, encompassing the Carpathian foothills of the northern part of the Western Carpathians. The churches represent a unique example of the tradition of medieval timber-built churches in Roman Catholic culture. They were built using the horizontal log technique, which was commonplace in Northern and Eastern Europe during the Middle Ages. The range of idiosyncratic structural solutions employed in their construction, however, rendered them unique.

The functional spatial layout of these buildings arose from liturgical requirements adopted from the West. The churches have an extensive spatial structure, which initially consisted of two elements: a rectangular nave; and a narrower chancel to the east, usually terminating in a three-sided apse. Later, chambered towers of post-and-beam construction were added at the west end (the church in Lipnica Murowana being an exception) and the main body of the churches was circumscribed by arcades known as soboty. Thanks to the use of high-quality structural joinery solutions, such as the system of roof trusses binding the log structures of the nave and chancel, they took on a characteristic architectural form featuring tall shingled roofs covering both the nave and the chancel and thus reinforcing the entire building. These churches also feature unique, high-quality joinery details, highlighting their Gothic character.

The churches boast particularly valuable décors and fittings that exhibit diverse techniques and styles of workmanship, rich iconography, and outstanding artistic quality. They also provide an illustration of the stylistic changes in the decoration of ecclesiastical interiors, starting from the Gothic period. All elements of the rich interior décors are harmoniously interrelated and complement one another perfectly in terms of their content, function, and style.

The churches constitute an example of dominant landmarks within rural settings, which determine their unique present-day landscape qualities – most of them are situated in picturesque mountain valleys. These buildings, which were founded by noble families as symbols of their prestige, all serve their original purpose as venues for traditional celebrations and religious ceremonies; in some of them, religious images renowned for securing divine favour are still revered.

Criterion (iii): The wooden churches of Southern Małopolska bear important testimony to medieval church building traditions associated with the liturgical and cult functions of the Roman Catholic Church in this relatively isolated region of Central Europe.

Criterion (iv): The churches are the most representative examples of surviving Gothic churches built using the horizontal log technique; they are particularly impressive in their artistic and technical execution, and were sponsored by noble families and rulers as symbols of social and political prestige.

Within the boundaries of the property are located all the elements that sustain the Outstanding Universal Value of the Wooden Churches of Southern Małopolska, which remain intact and in good condition. Even though they do not constitute an architectural complex in a territorial sense, the Wooden Churches of Southern Małopolska belong to a compact and distinctive group of ecclesiastical buildings, integrally interrelated with regard to their date of construction, function, materials and structural solutions used, and architectural form. The property is therefore of adequate size to ensure the complete representation of the features and processes that convey its significance, and it does not suffer from adverse effects of development and/or neglect.

The integrity of the wooden churches is also evident in the close connection between their architectural features and their interior décor and fittings, as well as in their unchanging function. Thus, historical and artistic interrelations are revealed, which not only reflect local traditions in both carpentry and art, but also provide evidence of religious and social relations during the medieval period in this region. All of the Wooden Churches of Southern Małopolska constitute rural landmarks, serving as integrating factors between the cultural and natural values of the local landscape.

The appearance of new building development that disrupts the scale of these churches and the way they are perceived in their historic setting may pose a threat to their integrity.

All of the Wooden Churches of Southern Małopolska are Gothic buildings that have survived in their historic form. Their authenticity is manifest in their locations and settings, their extant fabric, the structural solutions that were used in their construction (the horizontal log technique, the post-and-beam tower structure, the system of roof trusses binding the structures of the nave and chancel, and the king-post roof trusses), and their architectural form, defined principally by a characteristic tripartite ground plan (except for the towerless church in Lipnica Murowana), high roofs, chambered towers, and arcades, as well as superb carved wooden details. The Wooden Churches of Southern Małopolska are also characterised by an authenticity of function, since they still serve as venues for traditional celebrations and religious ceremonies, including (in some instances) reverence of original benevolent images.

Important attributes further evidencing the wooden churches’ authenticity are their décor and interior fittings, primarily comprising polychrome painted decoration on the walls and ceilings showcasing various techniques and styles, subjects, and iconographic programmes, as well as providing examples of local patronage. The specific nature of this sponsored painting (extant in some of the churches), rooted in Gothic origins, is also a characteristic feature of this type of wooden church. Apart from their decorative function, and in keeping with medieval tradition, they also served educational purposes, providing ideological symbolism.

The wooden churches are examples of the tradition and technologies developed by the medieval guilds. The enduring continuity of workshop traditions ensures the consistent use of the same techniques and materials, thus preventing the loss of the property’s original character.

The Wooden Churches of Southern Małopolska are protected by law under the regulations determining the protection of historic monuments, implemented by the national monument protection services. The legal obligation to maintain these properties in good condition lies with the Roman Catholic parishes in Blizne, Binarowa, Dębno Podhalańskie, Haczów, Lipnica Murowana, and Sękowa. Responsibility for carrying out conservation programmes falls directly on the parishes, or on specially appointed plenipotentiaries, under the professional supervision of the relevant Provincial Conservator of Monuments, with the participation of diocesan conservators from the diocesan curiae.

In order to better protect and preserve the Outstanding Universal Value, authenticity, and integrity of these churches, cooperation between the parishes (administrators) and the local authorities and communities should be intensified. Developing detailed rules for monitoring the property and regulating the issues related to obtaining funds for conservation work is also recommended, as this would facilitate the churches’ protection and maintenance. In order to provide effective protection of the churches and their surroundings, the development and implementation of an integrated Management Plan is essential.