Built between 1482 and 1533, this group of buildings was originally used for trading in silk (hence its name, the Silk Exchange) and it has always been a centre for commerce. It is a masterpiece of late Gothic architecture. The grandiose Sala de Contratación (Contract or Trading Hall), in particular, illustrates the power and wealth of a major Mediterranean mercantile city in the 15th and 16th centuries. 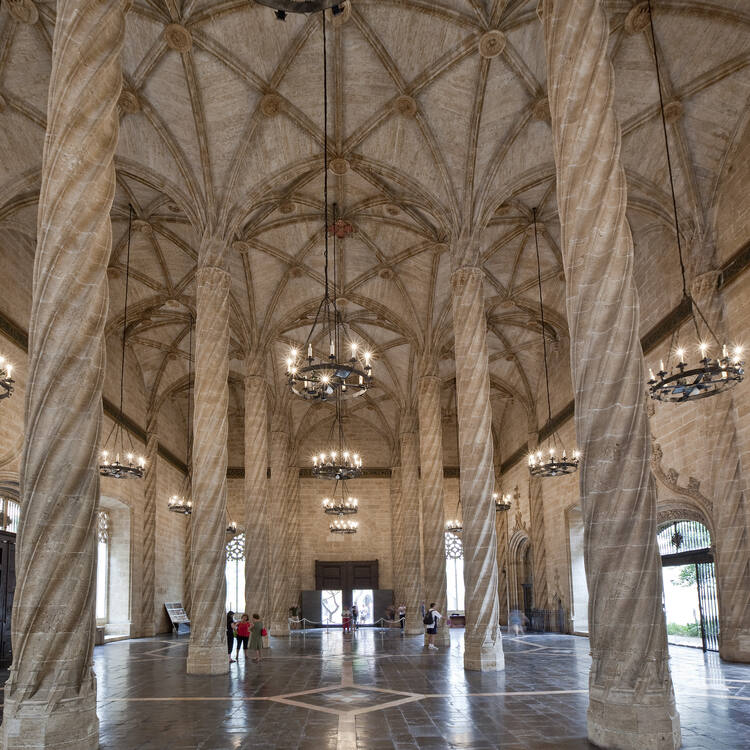 La Longa de la Seda de Valencia, located on the Mediterranean coast of the Iberian Peninsula, is without a doubt the most emblematic group of buildings of the city. La Longa de la Seda de Valencia is an exceptionally well-preserved example of a secular building in late Gothic style of outstanding artistic value.  It bears eloquent witness to the role played in the Mediterranean and far beyond by the merchants of the Iberian Peninsula in the 15th and 16th centuries.

Built from 1483 on the initiative of the Consell de la Ciutat (City Council) and under the direction of the architects Pere Compte and Joan Ivarra, the complex of buildings was originally dedicated to the silk trade (hence the name "Silk Exchange"). Nearly half of the monuments’ surface area, which is rectangular in plan, is covered by the Sala de Contratación. The tower (including the chapel), the Sala del Consulado del Mar and the Patio de los Naranjos (Court of Orange Trees) complete the complex.

The Sala de Contratación is a magnificent hall in Flamboyant Gothic style. The interior, with three main aisles, is covered by a series of cross vaults resting on slender helical pillars almost 16 metres high. The floor is paved with Alcublas marble of different colours. On the walls, a Latin inscription in Gothic characters reminds the merchants of their duties as merchants and good Christians: not to revert to usury in their trade, so as to be able to attain eternal life. Light enters through soaring Gothic windows, the external frames of which, like the doors, are exuberantly ornamented, notably by a series of grotesque gargoyles. In the centre of the main facade, on the Plaza del Mercado, is the imposing doorway, crowned by an image of the Virgin, and with the royal coat of arms of Aragon. The delicate windows on either side are surmounted by the arms of the town. The same architectonic scheme is repeated at the other end of the hall. This building, like the rest of the ensemble, is crenellated. The Taula de Canvis, the first municipal banking institution created in 1407, was installed in the salon dedicated to commercial transactions.

Access to the chapel which forms the ground floor of the Tower is via the Sala de Contratación. It is square in plan, with vaulting springing from angular column groups. Access to the upper floors is via a remarkable helical staircase executed with great technical perfection and without a central axis.

The Consulado del Mar, built at the beginning of the 16th century, has a vaulted cellar and two levels. In addition to the aforementioned Pere Compte, project managers Joan Corbera and Domingo de Urtiaga were also involved in its construction. It is a late Gothic style building, exuberant in the decoration of its facades, especially on the upper floor where the windows have richly decorated sills and lintels and are crowned by portrait medallions. The interior is notable for the carved decoration enriched by gilding and paintings of the chamber on the first floor - the piano nobile, or Cambra Dourada (Golden Room). The coffered ceiling came from the old City Hall, now demolished.

La Lonja is a typical example of functional architecture for commercial activities. The ornamental repertoire that enriches the building expresses a symbolic message that exalts the dignity of the merchant by encouraging him to exercise his important social responsibility, in solidarity with the community in which he is integrated, with the utmost probity, fairness and honesty.

In addition to being a very representative example of medieval places of commerce, the building incorporates elements of the new architectonic language that developed in Europe at the end of the 15th century incorporating the most daring progress in the field of construction techniques (admirable twisted columns and vaults of remarkable complexity, all in freestone of the highest quality).

Criterion (i): La Lonja de la Seda de Valencia represents a masterpiece of European Gothic art, a true temple of commerce based on a unique architectonic and symbolic programme.

Criterion (iv): La Lonja de la Seda de Valencia is an outstanding example of a secular building in late Gothic style, which dramatically illustrates the power and the wealth of the great Mediterranean mercantile cities.

La Lonja de la Seda de Valencia has all the essential attributes to represent its Outstanding Universal Value. After more than five hundred years, La Lonja preserves its architectonic characteristics in optimal conditions, as well as its decorative and symbolic elements which enrich the whole ensemble. There is nothing unusual about this remarkable state of conservation given that La Lonja has been in continuous use over the centuries, and in view of the excellent quality of the materials used in its construction.

The authenticity of La Lonja de Valence is high: it has been maintained meticulously for five centuries, and restoration carried out over the years has respected the original materials, so as to preserve the overall appearance of the buildings.

Very few elements have been introduced or significant modifications made since the 15th century, and few major changes have been made to its original vocation - trading house, formerly for oil and silk and, subsequently, for grains and cereals. The stucco decoration of the passageway leading from the chapel to the Consulado del Mar building, added in 1832, is faithful to the original ornamental plan; and the raising of the tower, following the repair of the roofs in 1891-1920, with their crenelations, also reproduces the style of the original structures adjoining it. Appropriate interventions for the restoration and enhancement of the building, carried out with meticulous rigour in recent years, have greatly contributed to improving its appearance.

The ensemble of La Lonja de la Seda was declared a National Historic and Artistic Monument in 1931. Management of the complex in terms of conservation, maintenance, enhancement, cultural dissemination and attention to visitors (in groups or individually), is the responsibility of the owner of the property, i.e. the Valencia City Council and, in an operational capacity, the Municipal Delegation for Culture, assisted by the managers and technicians of the Historical and Cultural Heritage Service, Museums and Monuments Section.

With the aim of optimizing the management and guaranteeing the protection of the property, which is subject to national and regional legal regulations, the Valencian City Council had asked the Polytechnic University of Valencia to undertake a global study of the monument in order to draw up a conservation master plan for the property and its surroundings. The "Master Plan for the Conservation of La Lonja de Valencia" was approved on 9 December 2008 by the City Council of Valencia under the relevant corporate agreement, and in agreement with the Generalitat of Valencia, the regional government.

The entire area is currently the subject of a vast urban planning programme involving the rehabilitation of many private homes, the restoration of public buildings and the improvement of infrastructures. This programme is designed to restore the historic centre for residential purposes and to revive cultural activities, in particular by bringing a student population back to the area.