The city of Aigai, the ancient first capital of the Kingdom of Macedonia, was discovered in the 19th century near Vergina, in northern Greece. The most important remains are the monumental palace, lavishly decorated with mosaics and painted stuccoes, and the burial ground with more than 300 tumuli, some of which date from the 11th century B.C. One of the royal tombs in the Great Tumulus is identified as that of Philip II, who conquered all the Greek cities, paving the way for his son Alexander and the expansion of the Hellenistic world. 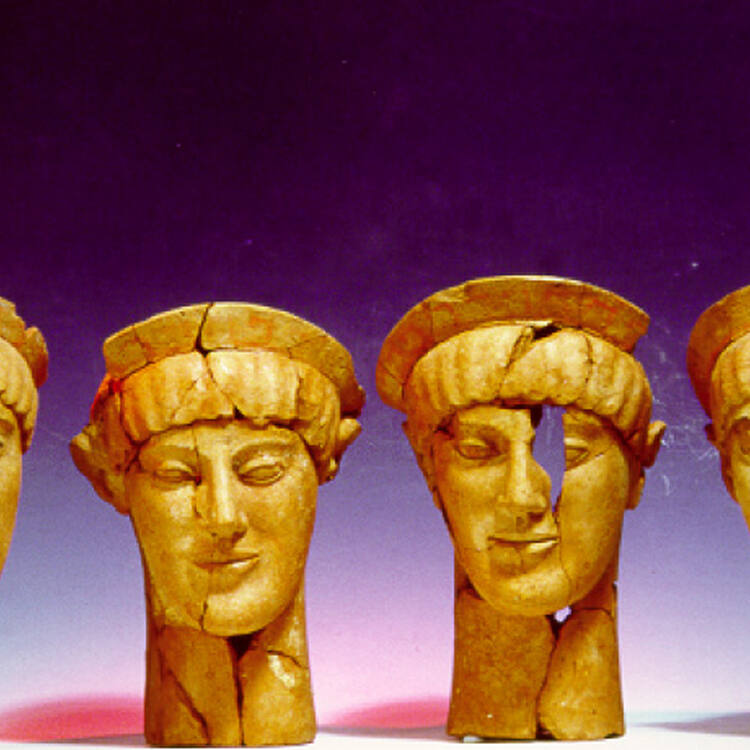 The city of Aigai, the ancient royal capital of Macedon, was discovered in the 19th century. It is located between the modern villages of Palatitsia and Vergina, in Northern Greece (Region of Hemathia). At Aigai was rooted the royal dynasty of the Temenids, the family of Philip II and Alexander the Great. The Archaeological Site of Aigai, containing an urban center – the oldest and most important in Northern Greece – and several surrounded settlements, is defined by the rivers Haliakmon (W and N), Askordos (E), and the Pierian Mountains (S). Aigai provides important information about the culture, history and society of the ancient Macedonians, the Greek border tribe that preserved age-old traditions and carried Greek culture to the outer limits of the ancient world. The most important, already excavated, archaeological remains of the site are: the monumental palace (ca 340 BC), which was the biggest and one of the most impressive buildings of classical Greece, the theatre, the sanctuaries of Eukleia and the Mother of the Gods, the city walls, the royal necropolis, containing more than 500 tumuli, dating from the 11th to 2nd century BC. Three royal burial clusters have been already excavated. Twelve monumental temple-shaped tombs are known. Among them is the tomb of Euridice, mother of Philip II and the unlooted tombs of Philip II, father of Alexander the Great, and his grandson, Alexander IV, which have been discovered in 1977-8 and made a worldwide sensation. The quality of the tombs themselves and their grave-goods places Aigai among the most important archaeological sites in Europe.

Criterion (i): Both the cemetery and the city contain original and unique historical, artistic and aesthetic achievements of the late classical art of extraordinarily high quality and historical importance, such as the architectural form of the royal palace and the magnificent wall paintings of the so-called Macedonian tombs, as well as objects such as the ivory portrait and miniature art, metal, gold and silver work. Many of these achievements were created by great artists of ancient Greece, such as Leochares and Nikomachos.

Criterion (iii): Τhe site represents an exceptional testimony to a significant development in European civilization, at the transition from the classical city state to the imperial structure of the Hellenistic and Roman periods. This is vividly demonstrated in particular by the remarkable series of royal tombs and their rich contents.

The World Heritage property contains within its boundaries all the key attributes that convey its Outstanding Universal Value. A zone of absolute protection, prohibiting any building activity, and containing the ancient city, its cemeteries and a Bronze-Age mount, ensures its integrity. A wider protection zone, with building restrictions, ensures more the integrity of site. Aigai provides some of the most complete, whole and intact ancient monuments, such as the palace and the sanctuaries, the so-called Macedonian tombs and complete specimens of rare pieces of ancient art. The archaeological research in the city and cemeteries in combination with the restoration projects running in the Palace and the Royal Necropolis, according to the site’s master plan and the national and international standards and regulations, have multiple and positive impact for the documentation and protection of the site. The natural setting, (semi-mountainous landscape, rivers, flora), which corresponds to the ancient urban territory and the cultural remains of the Macedonian royal center, emphasizes the integrity of the property.

The Archaeological Site of Aigai, with its artistic and architectural remains testifies its authenticity, in terms of form, materials and setting. It is generally accepted that excavation, especially of earthen structures and deposits, is necessarily an act of destruction. The original Great Tumulus is therefore no longer in existence, and has been simulated in the cover structure. The protective shelter has been constructed in order to protect and ensure the authenticity of the royal tombs. Its tumulus-shaped form and the technical specifications are in complete harmony and respect to the monuments. However, the interiors of the tombs are entirely authentic, with only minimal modern interventions in order to preserve their continued stability. Elsewhere on the site (e.g. the palace) the remains are entirely authentic.

The subterranean temple-shaped tombs are amongst the best-preserved examples on the use of colour in ancient architecture, and their discovery revealed for the first time the intact façade of an ancient Greek building. The complete and emblematic form of the royal palace, based on philosophical, political and architectural notions (archetype of peristyle palatial buildings), served in antiquity and modern times as the prototype and a visual statement of the notion of the enlightened kingship. Some of the royal tombs have been sheltered. The protection of the monuments and their natural environment as a unit ensures the authentic context of the city and its cemeteries.

The property is a serial site with two components surrounded by an extensive buffer zone. It is under the jurisdiction of the Ministry of Culture, Education and Religious Affairs, through the Ephorate of Antiquities of Hemathia, its competent Regional Service. The Archaeological Site of Aigai is protected under the provisions of Law No. 3028/2002 on the “Protection of Antiquities and Cultural Heritage in general”. Τhe protected Archaeological Site of Aigai (Ministerial Decree 35117/2019/2.8.95) is located inside a designated area of outstanding natural beauty (Decree of the Minister of Macedonia and Thrace No. 8383/92/28.1.1993). A zone of absolute protection has been established, covering the ancient city, the necropolis, and all the surrounding area within which antiquities have been discovered, as well as a buffer zone. Development pressures to the property are addressed by the implementation of the aforementioned legal framework and the constant control of the competent Ephorate.

A complete master plan, concerning the protection, restoration, visiting and information, in order to maintain the Outstanding Universal Value of the site in the long term, is approved by the Central Archaeological Council/Ministry of Culture, Education and Religious Affairs.

The project of the restoration, implantation and embellishment of the Royal Cemetery, funded by the EU, is completed and the area is open to the public, while the same project for the Royal Palace is in progress and the monument is partly accessible to the visitors. The new building of the Multi-Centre Museum of Aigai, also funded by the EU, is already constructed, and it will be open to the public as soon as the exhibition is completed. The Archaeological Site of Aigai has an ongoing systematic excavation. Furthermore, many conservation studies, archaeometric research and architectural restoration studies have been completed for the better understanding of the monuments, as well as the dissemination of historical and archaeological data. The funding of the projects comes from national and European resources.

The cluster of the royal tombs is protected by a tumulus-shaped shelter, the present Museum of the Royal Tombs at Aigai. All the items found in the cluster, the architectural buildings, wall paintings of the tombs are displayed in a secure and controlled environment. It constitutes a particularly original example of burial monuments sheltered in a modern underground museum.

The worldwide impact of the antiquities discovered in Aigai resulted in a massive turnout of visitors, for whom special facilities have been provided. The digital museum, entitled ‘’Alexander the Great: From Aigai to Oikoumene’’, is under construction. It will be based at Aigai, the ancient capital of Macedon and it will be interactively connected with others sites, museums and institutions worldwide and create an archaeological network showing the universal value of the site.