In a small valley in the Peloponnesus, the shrine of Asklepios, the god of medicine, developed out of a much earlier cult of Apollo (Maleatas), during the 6th century BC at the latest, as the official cult of the city state of Epidaurus. Its principal monuments, particularly the temple of Asklepios, the Tholos and the Theatre - considered one of the purest masterpieces of Greek architecture – date from the 4th century. The vast site, with its temples and hospital buildings devoted to its healing gods, provides valuable insight into the healing cults of Greek and Roman times. 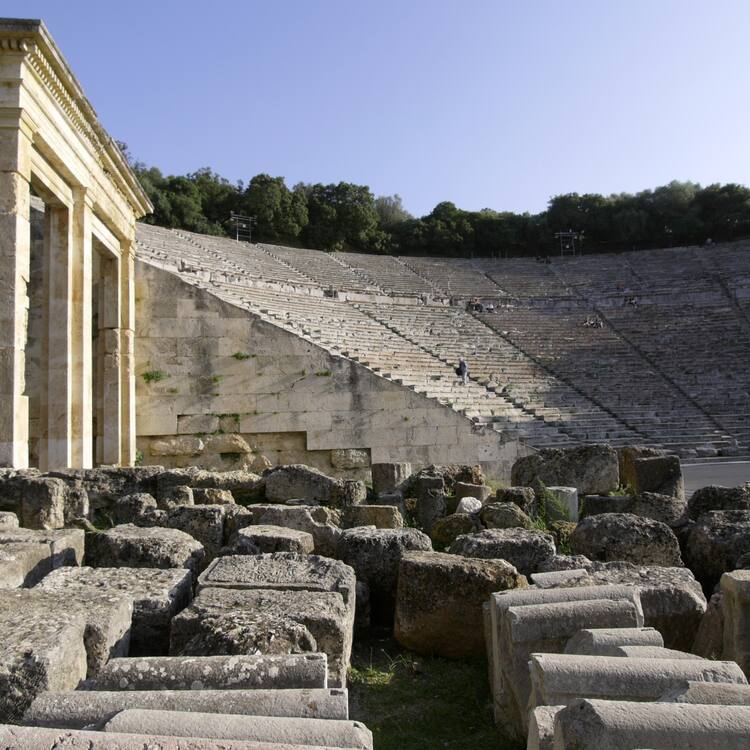 The Sanctuary of Asklepios at Epidaurus is a remarkable testament to the healing cults of the Ancient World and witness to the emergence of scientific medicine. Situated in the Peloponnese, in the Regional unit of Argolis, the site comprises a series of ancient monuments spread over two terraces and surrounded by a preserved natural landscape. Among the monuments of the Sanctuary is the striking Theatre of Epidaurus, which is renowned for its perfect architectural proportions and exemplary acoustics. The Theatre, together with the Temples of Artemis and Asklepios, the Tholos, the Enkoimeterion and the Propylaia, comprise a coherent assembly of monuments that illustrate the significance and power of the healing gods of the Hellenic and Roman worlds.

The Sanctuary is the earliest organized sanatorium and is significant for its association with the history of medicine, providing evidence of the transition from belief in divine healing to the science of medicine. Initially, in the 2nd millennium BCE it was a site of ceremonial healing practices with curative associations that were later enriched through the cults of Apollo Maleatas in the 8th century BCE and then by Asklepios in the 6th century BCE. The Sanctuary of the two gods was developed into the single most important therapeutic center of the ancient world. These practices were subsequently spread to the rest of the Greco-Roman world and the Sanctuary thus became the cradle of medicine.

Among the facilities of the classical period are buildings that represent all the functions of the Sanctuary, including healing cults and rituals, library, baths, sports, accommodation, hospital and theatre.

The site is one of the most complete ancient Greek sanctuaries of Antiquity and is significant for its architectural brilliance and influence. The Sanctuary of Epidaurus (with the Theatre, the Temples of Artemis and Asklepios, the Tholos, the Enkoimeterion, the Propylaia, the Banqueting Hall, the baths as well as the sport and hospital facilities) is an eminent example of a Hellenic architectural ensemble of the 4th century BCE. The form of its buildings has exerted great influence on the evolution of Hellenistic and Roman architecture. Tholos influenced the development of Greek and Roman architecture, particularly the Corinthian order, while the Enkoimeterion stoa and the Propylaia introduced forms that evolved further in Hellenistic architecture. In addition, the complicated hydraulic system of the Sanctuary is an excellent example of a large-scale water supply and sewerage system that illustrates the significant engineering knowledge of ancient societies. The exquisitely preserved Theatre continues to be used for ancient drama performances and familiarizes the audience with ancient Greek thought.

Criterion (i): The Theatre of Epidaurus is an architectural masterpiece designed by the architect from Argos, Polykleitos the Younger, and represents a unique artistic achievement through its admirable integration into the site as well as the perfection of its proportions and acoustics. The Theatre has been revived thanks to an annual festival held there since 1955.

Criterion (ii): The Sanctuary of Asklepios at Epidaurus exerted an influence on all the Asklepieia in the Hellenic world, and later, on all the Roman sanctuaries of Esculape.

Criterion (iii): The group of buildings comprising the Sanctuary of Epidaurus bears exceptional testimony to the healing cults of the Hellenic and Roman worlds. The temples and the hospital facilities dedicated to the healing gods constitute a coherent and complete ensemble. Excavations led by Cavvadias, Papadimitriou and other archaeologists have greatly contributed to our knowledge of this ensemble.

Criterion (iv): The Theatre, the Temples of Artemis and Asklepios, the Tholos, the Enkoimeterion and the Propylaia make the Sanctuary of Epidaurus an eminent example of a Hellenic architectural ensemble of the 4th century BCE.

Criterion (vi): The emergence of modern medicine in a sanctuary originally reputed for the psychically-based miraculous healing of supposedly incurable patients is directly and tangibly illustrated by the functional evolution of the Sanctuary of Epidaurus and is strikingly described by the engraved inscriptions on the remarkable stelai preserved in the Museum.

The World Heritage property contains within its boundaries all the key attributes that convey the Outstanding Universal Value of the Sanctuary. The facilities that have been discovered in the Sanctuary represent all its functions during the entire duration of its use up until Early Christian times. These include the acts of worship, the procedure of healing with a dream-like state of induced sleep known as enkoimesis through the preparation of the patients, the facilitating of healing with exercise and the conduct of official games. Since 1984, the Sanctuary has been designated as a zone of absolute protection in which no building activities are permitted. This zone of 1398.8 hectares coincides with the core zone of the property and is surrounded by the property’s buffer zone, which has controlled building activities and covers an area of 1992,6 hectares. These protective zones have almost entirely preserved the whole natural landscape as seen from the Sanctuary.

The form and material of Epidaurus’ Theatre characterize it as one of the most authentic among the known theatres of the ancient world. The Stadium preserves almost 90% of its ancient form and material. The other numerous monuments of the Sanctuary have preserved many elements of their design and material in such a way that construction can be ascertained according to their ancient form. The interventions in some of the most significant structures have been made in accordance with the international principles of restoration with respect to the legibility of the edifices and to the principle of reversibility. The Sanctuary’s location and setting has been almost entirely preserved so that visitors are still able to experience the spiritual character of the site.

The Sanctuary of Asklepios and Apollo Maleatas is protected under the provisions of Law No 3028/2002 on the “Protection of Antiquities and Cultural Heritage in general”. Since 1984 it has been incorporated in a zone of absolute protection, in which no building activity is permitted (Presidential Decree 18.11.1983). This zone is surrounded by a wider zone with obligatory controls for the issue of building or construction permits. In 2012, there was an expansion of the designated area of the archaeological site (Ministerial Decision in Government Gazette: 220/ AAP/ 15-6-2012), covering the broader area beyond the Sanctuary, thus extending the monitoring. The greater part of the area in which the Sanctuary was developed during the Antiquity belongs to the Greek state.

The property is under the jurisdiction of the Ministry of Culture, Education and Religious Affairs through the Ephorate of Antiquities of Argolis, its competent Regional Service which systematically supervises the area for any acts of illegal excavations and quarrying as well as the monitoring and intervention for cases in which antiquities are revealed during the course of digging works. In 1984 the Committee for the Conservation of Epidaurus Monuments was founded as the responsible body for conservation and restoration works as well as for the enhancement of the Sanctuary.

The financial resources for the site are derived by state budget as well as funds from European Union. The conservation and enhancement project involves interventions on important monuments of the site as well as enhancement works of the Sanctuary’s surroundings and upgrading of the services provided to visitors. Future plans aim to protect and enhance monuments which are not yet included at this stage in the restoration program and also aim to construct shelters for the protection of vulnerable monuments from adverse weather conditions.

The Sanctuary, with management that is considered successful, receives more than 250.000 visitors annually. Special facilities exist for the management of the audience attending the annual performances at the ancient Theatre.

The safety of the site is ensured with an adequate and qualified security staff. An upgraded fire protection system has been developed, using both conventional and modern instruments. During the restoration works all the necessary measures for ensuring the stability of the monuments are being implemented and thus the findings in the museum and its depots are adequately protected from earthquake hazards.

The long-term goal is to offer to the public a legible and understandable monumental complex that will reveal the operation of the Sanctuary during ancient times. Through constant care and gradual enhancement of all its monuments, the site will provide a natural, cultural and archaeological park with high level visitor services.