Standing in a large green expanse, Piazza del Duomo houses a group of monuments known the world over. These four masterpieces of medieval architecture – the cathedral, the baptistry, the campanile (the 'Leaning Tower') and the cemetery – had a great influence on monumental art in Italy from the 11th to the 14th century. 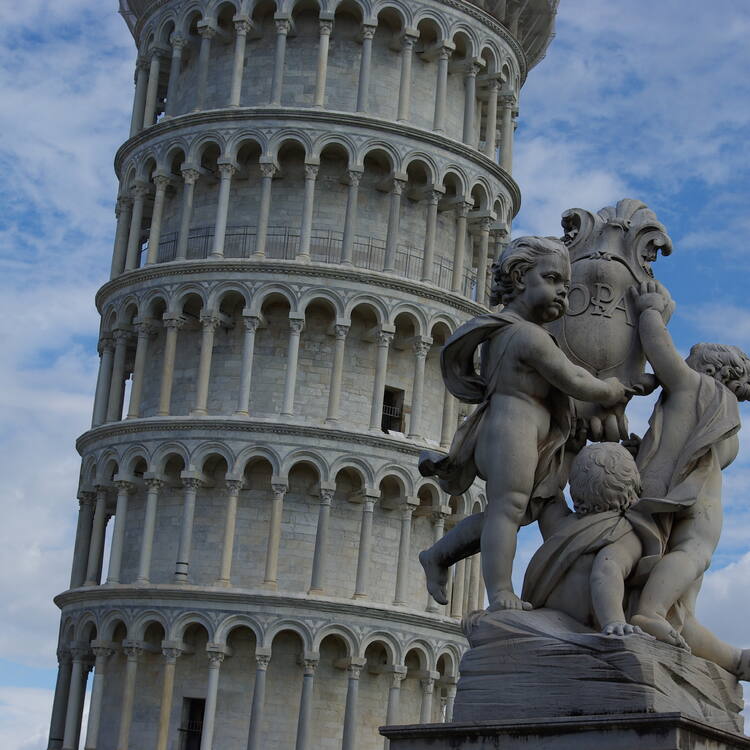 Piazza del Duomo houses a group of monuments known throughout the world. Standing in a large green expanse, enclosed by the city walls, the former Ospedale della Misericordia and the Palazzo dell’Arcivescovato, the Piazza del Duomo at Pisa comprises one of the most renowned constructed landscapes in the world. The four masterpieces of medieval architecture – the cathedral, the baptistery, the bell tower (the 'Leaning Tower') and the cemetery – were erected between the 11th and 14th centuries within close proximity of each other, forming a unique cluster of monuments. A striking quality pervades the site, emanating from the interplay of marble and mosaics, the usual alliance of bare walls and arched galleries, triangular frontons and heavy cupolas with the whole effect heightened by the breath-taking slant of the bell tower.

The square is remarkable since it contains works of art that bear witness to the creative spirit of the 14th century. Its monuments reflect such a decisive stage in the history of medieval architecture that they have become a reference point for studies related to the Pisan Romanesque style. The Camposanto and its cycle of frescoes, with particular typology and use, constitute an outstanding example for the history of Italian medieval painting of the 14th and 15th centuries.

Criterion (ii): The monuments of the Piazza del Duomo considerably influenced the development of architecture and monumental arts at two different times in history. First, from the 11th century up to 1284, during the epitome of Pisa's prosperity, a new type of church characterized by the refinement of polychrome architecture and the use of loggias was established. The Pisan style that first appeared with the Cathedral can be found elsewhere in Tuscany (notably at Lucca and Pistoia), but also within the Pisan maritime territory, as shown in more humble form by the "pieve" in Sardegna and Corsica. Later, during the 14th century, architecture in Tuscany was dominated by the monumental style of Giovanni Pisano (who sculpted the pulpit of the Cathedral between 1302 and 1311), a new era of pictorial art - the Trecento - was ushered in after the epidemic of the Black Death (Triumph of Death, a fresco by Bonamico Buffalmacco at the Campo Santo, c. 1350).

Criterion (iv): The group of monuments of the Piazza del Duomo, composed of typical religious buildings constructed for distinct and specific functions, constitutes an outstanding example of medieval Christian architecture.

Criterion (vi): It was at the Cathedral of Pisa that Galileo Galilei (1564-1642), observing the oscillations of the bronze chandelier created by Battista Lorenzi, discovered at the age of 19 the theory of isochronism of small oscillations, a prelude to his pioneering work on dynamics. From the top of the campanile, he conducted experiments, which led him to formulate the laws governing falling bodies. Two of the principal buildings of the Piazza dei Miracoli are thus directly and tangibly associated with a decisive stage in the history of physical sciences.

The Piazza del Duomo, as seen today, is a monumental complex and a public space that results from a long process that dates back to the Middle Ages. It began in 1064, with the foundation of the new Cathedral, and was concluded in the 14th century with the definition of a veritable “square”. The inscribed property encompasses 8.87 ha with a 254 ha buffer zone that includes all the necessary elements to convey the Outstanding Universal Value of the property. The interventions made over the centuries, after the completion of the square, have preserved the integrity of the structures and the spatial relationship between the monuments themselves, and between the monuments and their historical context, is maintained and are at present visible and comprehensible. The extension of the property has also ensured that the three main visual axes are adequately preserved. The creation of a buffer zone has also provided an additional layer of protection to the visual qualities and attributes of the property, although further protection might be warranted to the north and west of the inscribed property.

The monumental complex of the Piazza del Duomo of Pisa has retained over time the historical and artistic qualities and attributes that convey its Outstanding Universal Value. After the construction of the monumental buildings and of the square, the numerous interventions have strengthened the relationship between the square and the city, while respecting the values and significance of the buildings of the monumental complex. In more recent times, all the restoration works have been carried out by qualified personnel and have met both international and national standards for practice. The authenticity of the property, particularly in terms of location and setting, and form and design has been maintained over time.

There is an adequate legislative and protection framework in place at the national level, which is reflected, in the municipal plans. Under such legislation, any work must first be approved by the Ministry of Cultural Heritage and Activities and Tourism through its local offices. According to the law the area is also subject to archaeological restrictions.

There is also zoning at the local level for the area of the inscribed property and uses are recognized in the city plan as A, B, C, i.e.: -A: ordinary maintenance -B: extraordinary maintenance -C: restoration and conservative reclamation. As to their intended use, sites of architectural interest are marked as “urban facilities” and in particular the Monumental cemetery is considered as a museum. The lawn areas are marked in the same plan as “gardens of historical, architectural or natural value”, and the city planning regulations put them in class value A, “Preservation area”. According to these planning tools, the design and all historical parts have to be preserved.

A very ancient institution, the Opera Primaziale Pisana, supervises the management system. The Opera was set up in 1063 and is run by a Deputation (similar to a Board of Directors) which is composed of several members coming from the Diocesan Ordinary and Ministry of Internal Affairs. The management structure is legally constituted and pursues exclusively social solidarity purposes, in the following areas:

a) Care, protection, preservation and maintenance, promotion of the image and development of the site, by taking care in particular, of the administration, maintenance, monitoring of the state of conservation of the property, as well as preservation and restoration actions for inscribed buildings and temporary assets; of purchasing and maintaining the furnishings, furniture and equipment;

b) Promoting the knowledge of the history and art in all their forms and cultural manifestations, with reference to the monumental complex and to the other assets.


An underlying premise of the management system is that buildings cannot be interpreted individually and have therefore to be considered in relation to the setting as a whole. Management provisions consider this overarching policy in the adopted legislation and in the guidance for technical and scientific criteria for interventions.