This group of petroglyphs in the Alta Fjord, near the Arctic Circle, bears the traces of a settlement dating from c. 4200 to 500 B.C. The thousands of paintings and engravings add to our understanding of the environment and human activities on the fringes of the Far North in prehistoric times. 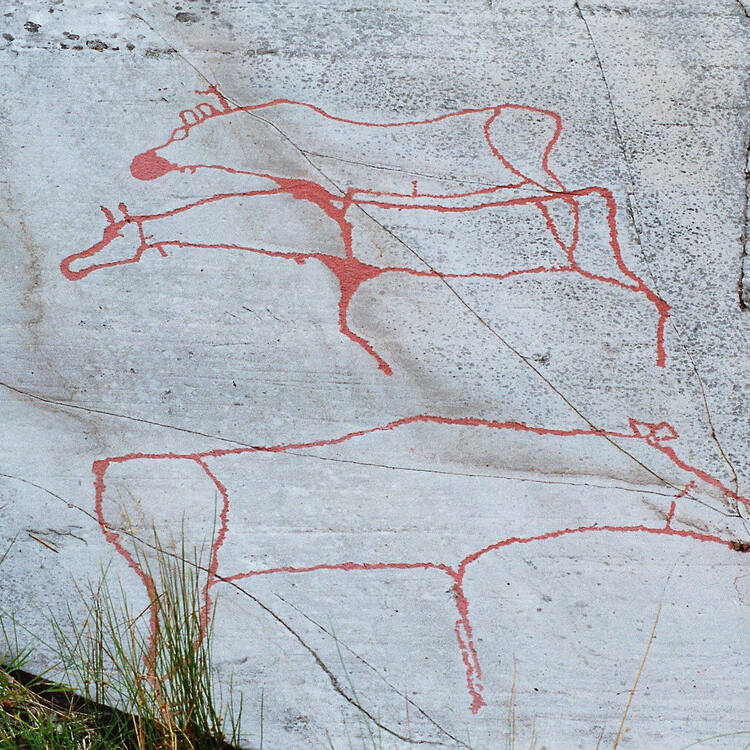 The property is situated in the northernmost part of Norway, far north of the Arctic Circle at the head of the Alta Fjord. It contains thousands of rock carvings and paintings located at 45 sites in five different areas at the head of the Alta Fjord (Kåfjord, Hjemmeluft, Storsteinen, Amtmannsnes and Transfarelvdalen). More rock art made by hunter-gatherers is found in Alta than anywhere else in northern Europe. This seems to indicate that for thousands of years, from approximately 5000 B.C. to about the year 0, Alta was an important meeting place far north of the Arctic Circle. The development of carvings in Alta through thousands of years can be related to the post-glacial land upheaval. The oldest carvings are found at the highest points of the landscape. In Alta the changing landscape of prehistoric times is evident, and the position of the carvings also provides a key to understanding the chronology of rock art in the circumpolar region.

The Rock Art shows communication between the world of the living and the worlds of the spirits, and gives insight into the cosmology of prehistoric hunters and gatherers. There is an exceptionally high number of human figures and compelling portrayals of prehistoric social life, dancing, processions, and rituals. Moreover, the Rock Art provides a unique testimony to the interaction of hunter-gatherers with the landscape. The panels show hunting, fishing and boat journeys, and are thought to represent micro-landscapes. A wide range of circumpolar fauna is depicted (reindeer, elks, bears, fish, whales, seabirds, etc.). Studies of material culture are enriched by the many different artefacts shown on the Alta panels. Good preservation conditions permit the study of rock art production.

Investigation of the large settlement sites adjacent to the carvings gives a better understanding of the social context of the Rock Art. The Rock Art and the settlement sites demonstrate communication in prehistory with areas thousands of kilometres away.

Criterion (iii): The Rock Art of Alta, with its thousands of paintings and engravings, is an exceptional testimony of the aspects of life, the environment and the activities of hunter-gatherer societies in the Arctic in prehistoric times. The wide range of motifs and scenes of high artistic quality reflect a long tradition of hunter-gatherer societies and their interaction with landscape, as well as the evolution of their symbols and rituals from approximately 5000 B.C. to about the year 0.

Nearly all the Rock Art sites known in Alta are included in the World Heritage property. All the different motifs, styles and chronological phases are represented by the inscribed components.

The rock art was created close to what was the shoreline in prehistory. The landscape in which the rock art is found remains relatively unchanged in recent times, and in particular the view stretching many kilometres out into the fjord is almost untouched by modern activity. In Alta one can easily imagine the changing landscape in prehistoric times.

Natural erosion and vandalism are potential threats to the carvings and paintings. Of the five areas only Hjemmeluft is open to the public. As part of the visitor management strategy, wooden walkways and platforms have been constructed to protect the Rock Art from damage.

Nearly all of the Rock Art of Alta is found on rock surfaces which are in situ. Except for a few cases of carvings on loose boulders, all of the rock art is found on the bedrock and is exceptionally well-preserved. About 30% of the carvings were covered by turf up to the time of their discovery and have not been significantly damaged since. The production technique can easily be studied, since the carvings have remained mostly intact. New cleaning techniques developed in Alta have rid the rock surfaces of potentially damaging lichen growths and substantially improved the visibility of the carvings. Hjemmeluft is the largest area with rock carvings. Here the carvings have been chiselled into very hard quartz-rich sandstone. The state of preservation varies from exceptionally good to good. Some of the rock carvings along the walkways have been painted red to make them easier to see. This practice is continually under discussion as it compromises the conditions of authenticity.

In the three other rock-carving areas there are softer rock types, and there has consequently been more erosion. But even in Kåfjord, where the red slate has more cracks than in the other areas, most of the figures have been preserved under turf, and the chisel marks from their production thousands of years ago can be studied. The area with rock paintings, Transfarelvdalen, was discovered by scientists in the 1960s, but the panels appear to have always been known to the local people. They are well preserved and painted on dry rock surfaces with red ochre clay as pigment and animal fat as the binding medium.

The sites inscribed as part of the World Heritage property are protected by the Norwegian Cultural Heritage Act. The State Party has the overall responsibility and the county authority has the management responsibility at regional level. A cooperation group for the World Heritage property was established in 1998 with members from all administrative levels, the University of Tromsø, Alta Museum and the Sámi Parliament in Norway.

The day-to-day management is performed by Alta Museum in keeping with the outlines and principles of the Management Plan, which is revised at regular intervals. Staff consists of both education and archaeology experts. Key responsibilities are facilitation and education for visitors and schools, monitoring and maintenance, including the development of methods for protective actions. Thorough documentation is produced and digitally archived.

The main challenge is the weathering process caused by vegetation, frost and other natural processes. A number of methods for limiting and slowing the weathering process have been developed, and others are being tested. Vandalism is also a potential threat. Some of the sites were discovered close to residential areas, as a result of which close monitoring by the cultural heritage authorities of any development which may have a visual impact on the property has become necessary.