Known as the 'Romanesque Sistine Chapel', the Abbey-Church of Saint-Savin contains many beautiful 11th- and 12th-century murals which are still in a remarkable state of preservation. 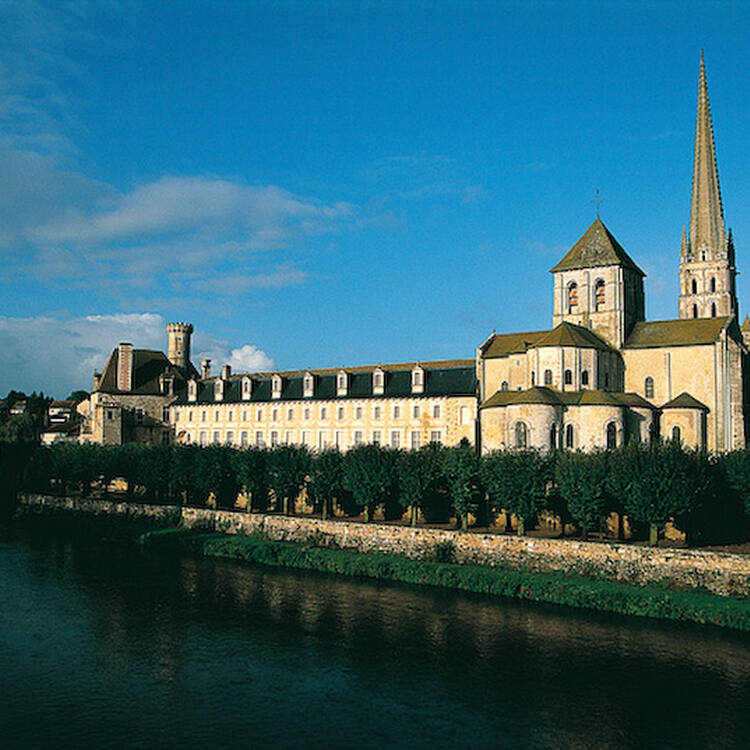 Located in the Nouvelle-Aquitaine region, the Abbey Church of Saint-Savin-sur-Gartempe, is an ancient abbey founded or refounded during the Carolingian era by Saint Benoît d’Aniane, father of western monasticism, under the protection of Charlemagne and his successors. Rebuilt in the 11th century, it bears witness to western Roman architecture with its well-balanced volumes. Its murals, executed at the end of the 11th or early 12th century, are an exceptional ensemble of medieval imagery. The edifice is mounted by a Gothic spire, of almost 80 metres in height, dating from the 14th century and reconstructed in the 19th century.

The pictoral presentation in the Abbey Church of Saint-Savin consists in an immense biblical narrative thematically organized and visually evident in all parts of the church. An initial pictoral cycle covering the vault of the “clocher-porche” and the tympanum of the doorway opening into the church describes the Apocalypse in imposing scenes. A second series of biblical subjects is spread across the entire barrel-vaulting of the central nave. The Passion of Christ is painted in the upper tribune of the porch, with scenes of the martyrs. Large figures of the saints are found in the choir and on the piers of the transept. Finally, the story of the Saints Savin and Cyprian covers the walls of the crypt that bears their names. This decoration makes this building an exceptional testimony to medieval tradition when churches were painted.

Criterion (i): The Abbey Church of Saint-Savin-sur-Gartempe is a masterpiece of the murals of the 11th and 12th centuries. Its outstanding character is due to its extraordinary decor, testimony to the art of representing and painting in western Christian medieval civilization. The walls are covered with murals containing narrative scenes, using an entire palette of colours and compositions that are full of elegance and movement. Such an art form reached its peak over this period. Its monumental style and the extensiveness of its iconography justify the name of “Romanesque Sistine Chapel”, which has been given to Saint-Savin-sur-Gartempe.

Criterion (iii): The Abbey Church of Saint-Savin-sur-Gartempe bears witness to the importance of the image in a monastic building, considered at that time as a major educational place, reflecting medieval ways of thinking. The images, profusely spread over its walls, are an outstanding testimony to medieval civilization and its means of representation and diffusion of ideas. Some of these biblical themes represented in image are topical in western Christian civilization.

Impressive by its exceptional volumes, the building possesses the largest area of Roman murals (420m2) resulting from a single and same campaign, a unique artistic realization in a remarkable state of conservation. Despite elements of the decor having experienced change in the 14th century, and the absence of any ancient decor in the choir, the proportion of painted cycles dating from the Roman era is extensive, given the presence of murals located in every part of the building. The church has undergone regular restoration. The monastery buildings, destroyed by the religious wars, were rebuilt in the 17th century. The Gothic spire, surmounting the abbey, marks the surrounding landscape with its soaring silhouette. The state of conservation of the edifice and its buildings is today judged to be satisfactory.

The Abbey contains within its walls, authentic masterpieces of Roman murals dating from the 11th and 12th centuries. The major part of its painted decor has been conserved, despite restoration work dating, for some, from the 19th century (painting of the pillars, decor of the demi-coupole…), colours which have today disappeared or been transformed (example: the minium), and the disappearance of coloured backgrounds of some scenes. The adjacent abbey buildings of the 17th century, some of which are protected sites, others inscribed as Historic Monuments, have also conserved their authenticity, despite the disappearance of other monastic characteristics, like the cloister.

The building has been listed as a Historic Monument since 1840. Any intervention is submitted for authorization and requires the State to exercise scientific and technical control. The property is protected by a buffer zone of almost 148ha equivalent to the existing legal protection boundaries (Outstanding Heritage Site of the community of Saint-Savin and surroundings of the abbey and its monuments located in the neighbouring community of Saint-Germain). A new buffer zone to improve the protection of the visual perspectives of the abbey is under consideration.

The commune owns the property, in particular the church, which became a parish church at the beginning of the 19th century. A public body for cultural cooperation (EPCC), associating the commune of Saint-Savin, the community of communes of Montmorillonnais, the Department of Vienne, the Nouvelle-Aquitaine region and the State, has been responsible for the cultural and economic promotion of the site of Saint-Savin since 1 July 2006. This body is in charge of the coordination of the management plan with regard to the property, which is currently being prepared.