Erzgebirge/Krušnohoří (Ore Mountains) spans a region in south-eastern Germany (Saxony) and north-western Czechia, which contains a wealth of several metals exploited through mining from the Middle Ages onwards. The region became the most important source of silver ore in Europe from 1460 to 1560. Mining was the trigger for technological and scientific innovations transferred worldwide. Tin was historically the second metal to be extracted and processed at the site. At the end of the 19th century, the region became a major global producer of uranium. The cultural landscape of the Ore Mountains has been deeply shaped by 800 years of almost continuous mining, from the 12th to the 20th century, with mining, pioneering water management systems, innovative mineral processing and smelting sites, and mining cities. 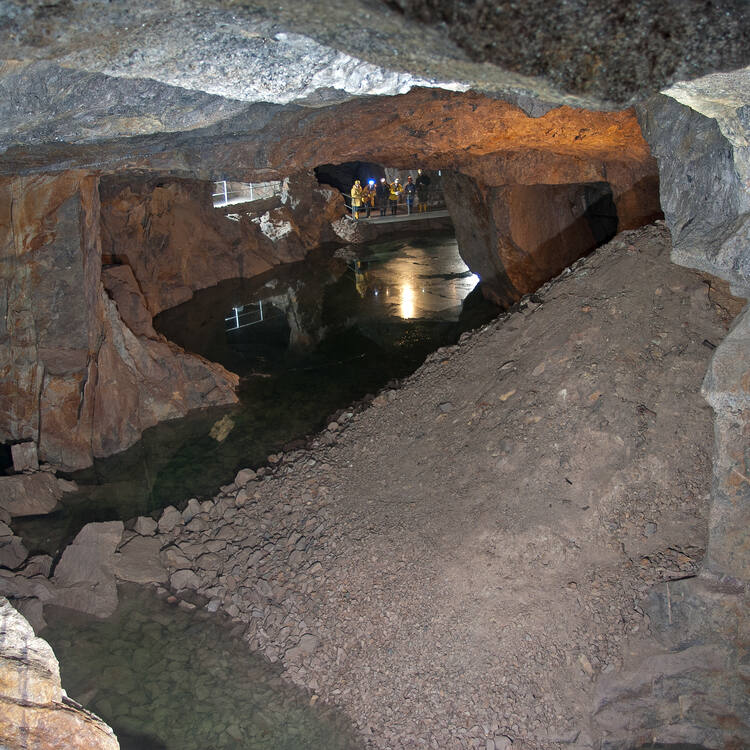 The mining region of Erzgebirge/Krušnohoří (Ore Mountains) is located between Saxony (Germany) and the Czechia. The transboundary serial property comprises 22 component parts that represent the spatial, functional, historical and socio-technological integrity of the territory; a self-contained landscape unit that has been profoundly and irreversibly shaped by 800 years of almost continuous polymetallic mining, from the 12th to 20th centuries.

The relict structure and pattern of the Erzgebirge/Krušnohoří Mining Region remains highly legible and is characterized by specific and formative contributions made by the exploitation of different metals, at different times, in unevenly distributed locations defined by an exceptional concentration of mineral deposits. Separate mining landscapes emerged on both sides of the Ore Mountains, characterized by exchange of technical know-how, miners and metallurgists between Saxony and Bohemia. These deposits became key economic resources that were exploited during crucial periods in world history, events that were dictated by evolving empirical knowledge and exemplary practice and technologies devised or improved in the Ore Mountains; the vagaries of global markets impacted by new mineral discoveries, politics and wars, and the successive discovery of ‘new’ metals and their uses.

The Ore Mountains was the most important source of silver in Europe, particularly in the century from 1460 to 1560; silver was also the trigger for new organization and technology. Tin was produced in a steady manner throughout the long history of the Ore Mountains and rare cobalt ore, which was mixed with the silver ores in the Ore Mountains, made this region a leading European, if not world, producer from the 16th to 18th centuries. Finally, the region became a major global producer of uranium in the late 19th and 20th centuries; the early period being one of original discovery and development.

The combination of shifting geographical mineral output, topography and a mining system predominantly under state control, dictated land-use: mining, water management and transport, mineral processing, settlement, forestry and agriculture. Due to the longevity, and intensity, of mining, the entire cultural landscape of the Ore Mountains is largely impacted by its effects, and is anchored by the mines themselves (above and below ground, with all ore deposit types and principal exploitation periods represented, and with exceptional equipment and structures remaining in situ); pioneering water management systems (of water supply, for power at the mines themselves and for drainage and ore-processing); transport infrastructure (road, railway and canal); innovative ore-processing and smelting sites that possess an exceptional variety and integrity of equipment and structures; mining towns that developed spontaneously with, and adjacent to, the silver bonanzas of the 15th and 16th centuries, their original urban layout and architecture reflecting their importance as administrative, economic, educational, social and cultural centres and retained as the basis for embellishment in the 18th and 19th centuries; agriculture that was contemporary with the earliest silver strikes in the 12th century and a well-established forerunner of large-scale mining; and sustainably managed forests that occupy traditional spaces in the landscape that were also subsidiary to the mining industry. The interaction between people and their environment is also attested by intangible attributes, such as education and literature, traditions, customs and artistic developments as well as social and political influences that both originated in the mining phenomenon, or were decisively shaped by it. They collectively provide testimony to the first stages in the region, in the early 16th century, of the early modern transformation of mining and metallurgy from a small scale craft-based industry with outdated medieval origins to a large-scale state-controlled industry fuelled by industrial capitalists that both preceded, and enabled, continuous and successful industrialization that continued into the twentieth century. State-control of the mining industry, with all its administrative, managerial, educational and social dimensions, together with technological and scientific achievements which emanated openly from the region, influenced all continental European mining regions and beyond.

Criterion (ii): The mining region of Erzgebirge/Krušnohoří is an exceptional testimony to the outstanding role and strong global influence of the Saxon-Bohemian Ore Mountains as a centre for technological and scientific innovations from the Renaissance up to the modern era. During several periods of mining history, significant achievements related to the mining industry emanated from the region and were successfully transferred, or influenced subsequent developments in other mining regions. This includes, among other achievements, the founding of the first mining high school. The continuous worldwide emigration of highly trained Saxon-Bohemian miners played a key role in the interchange of developments in, and improvements to, mining technology and its related sciences. Manifestations of this interchange are still evident in the Erzgebirge/Krušnohoří Mining Region.

Criterion (iii): The mining region of Erzgebirge/Krušnohoří bears exceptional testimony to technological, scientific, administrative, educational, managerial and social aspects that underpin the intangible dimension of living traditions, ideas and beliefs of the people associated with the Ore Mountains’ culture. The organization as well as its hierarchical administration and management are fundamental to understanding the mining tradition of the Ore Mountains that developed from the beginning of the 16th century. A tradition emerged whereby the mining bureaucracies of absolute rulers maintained strict control of the work force and induced a favourable climate for an early capitalistic system of financing. Such an approach influenced the economic, legal, administrative and social system of mining in all the mining regions of continental Europe. The state-controlled mining organization strongly influenced the development of early modern monetary systems, particularly witnessed by the royal mint in Jáchymov, where the heavy silver coins known as thalers, first minted from 1520, served for several centuries as a standard for the monetary systems in many European countries, and became a predecessor of the ‘dollar’ currency.

Criterion (iv): The mining region of Erzgebirge/Krušnohoří represents a coherent mining landscape with specific proportions of land dedicated in specific places to mining, dictated by the uneven distribution and concentration of ore deposits, and exploited in different periods and processing operations, to water management and forestry, to urbanization, agriculture, transport and communications – a pattern of nodes and concentrations, of linear connecting features, all developed in successive phases under increasing state control. Well-preserved mine workings, technological ensembles and landscape features bear witness to all known major extracting and processing technologies applied from the late medieval period to modern times, as well as to the development of extensive, sophisticated water management systems both aboveground and underground. The mining activities led to the unparalleled development of a dense settlement pattern both in the valleys and in very high, harsh upland positions, featuring a close connection to the surrounding mining landscapes.

The property, an organically evolved mining cultural landscape, comprises 22 components that, as a whole, illustrate the process of configuration of the territory over 800 years on the basis of mining activities. Both States Parties have adopted similar approaches to identify the components of the serial property, to justify in which way each of them contributes to illustrating the complex process of configuration of the mining cultural landscape and to establish the boundaries of the property and the buffer zones. On this basis, each of the components of the series plays a specific role in illustrating the types of landscapes related to the extraction of different ores from the Ore Mountains. The boundaries of each of the components have been carefully delineated in order to include all the features necessary to convey the contribution of that particular component to the Outstanding Universal Value. Although some of the components are exposed to factors that could represent a risk to their conservation, the legal instruments and management plan in place ensure the adequate protection of all of the attributes necessary to convey the property’s Outstanding Universal Value.

The property’s components have been preserved in their settings and, even though some have been adapted for new uses, they retain a high degree of authenticity. The mining landscape has also retained its comprehensive intangible heritage in the form of living traditions, and movable collections and archives are additional sources of reliable information on the values of the series. A span of 800 years of mining activity has led to changes to the landscape; some mining sites were abandoned whilst others continued to operate and witnessed technological adaptations. Continuous mining activity at certain sites contributed to the conservation of mining structures as well as to their continuous repair and upgrade. The underground installations in general retain a high degree of authenticity; above ground, abandoned buildings or structures were, in some cases, demolished or adapted to new uses; although efforts to preserve mining sites began a hundred years ago, many remained in poor condition until the 1990s, when conservation campaigns were begun in historic towns and mining sites. The Academy of Freiberg continues to carry out research on mining and its operations, contributing to the growth of knowledge.

There is a comprehensive set of legal protective instruments in place in both States Parties and active conservation is carried out throughout the property. The States Parties have elaborated a management plan 2013-2021 for the property, which includes two national sections and an international management plan. The international section includes a memorandum of understanding between the two States Parties, provisions for transboundary buffer zones and the scheme for the structure and organization of the transboundary management. The international management bodies include a Bilateral Steering Committee and a Bilateral Advisory Group and a common future vision is included.

The Bilateral Steering Committee has, among other objectives, represent the interests of the respective States Parties, and the mutual provision of information, coordination and strategic planning. The Bilateral Advisory Group is established at the regional level and is responsible for the coordination of all common issues; its main objective is to protect, oversee and sustainably develop the Outstanding Universal Value of the serial property. Together with the national coordination offices, its main responsibilities include coordination of information and actions, conservation of the property, periodic reporting, public relations and international measures.

Both national sections of the management plan include, besides conservation of Outstanding Universal Value of the property, provisions oriented to promoting sustainable tourism and providing adequate visitor management. Both States Parties propose a set of key indicators to monitor the state of conservation of the components of the property; despite the two different approaches taken by the States Parties, the monitoring system in place is adequate