The List Sites of Human Evolution at Mount Carmel: The ...
Print

Situated on the western slopes of the Mount Carmel range, the site includes the caves of Tabun, Jamal, el-Wad and Skhul. Ninety years of archaeological research have revealed a cultural sequence of unparalleled duration, providing an archive of early human life in south-west Asia. This 54 ha property contains cultural deposits representing at least 500,000 years of human evolution demonstrating the unique existence of both Neanderthals andEarly Anatomically Modern Humans within the same Middle Palaeolithic cultural framework, the Mousterian. Evidence from numerous Natufian burials and early stone architecture represents the transition from a hunter-gathering lifestyle to agriculture and animal husbandry. As a result, the caves have become a key site of the chrono-stratigraphic framework for human evolution in general, and the prehistory of the Levant in particular. 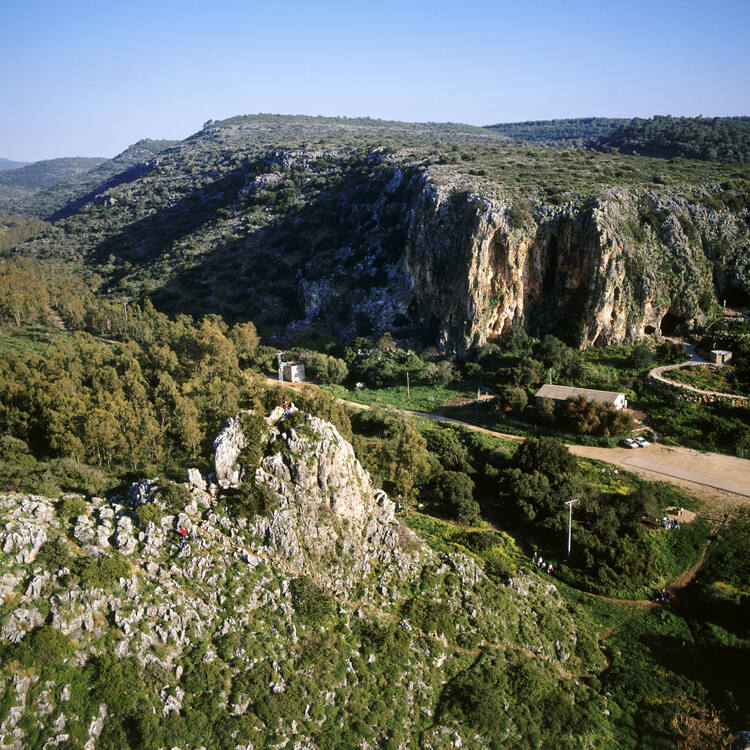 The four Mount Carmel caves (Tabun, Jamal, el-Wad and Skhul) and their terraces are clustered adjacent to each other along the south side of the Nahal Me’arot/Wadi el-Mughara valley. The steep-sided valley opening to the coastal plain on the west side of the Carmel range provides the visual setting of a prehistoric habitat.

Located in one of the best preserved fossilised reefs of the Mediterranean region, the site contains cultural deposits representing half a million years of human evolution from the Lower Palaeolithic to the present. It is recognised as providing a definitive chronological framework at a key period of human development.

Archaeological evidence covers the appearance of modern humans, deliberate burials, early manifestations of stone architecture and the transition from hunter-gathering to agriculture. The attributes carrying Outstanding Universal Value include the four caves, terraces, unexcavated deposits and excavated artefacts and skeletal material; the Nahal Me’arot/ Wadi el-Mughara landscape providing the prehistoric setting of the caves; el-Wad Terrace excavations, and remains of stone houses and pits comprising evidence of the Natufian hamlet.

Criterion (iii) : The site of the Nahal Me'arot/ Wadi el-Mughara Caves displays one of the longest prehistoric cultural sequences in the world. From the Acheulian complex, at least 500,000 years BP, through the Mousterian culture of 250,000-45,000 years BP, and up to the Natufian culture of 15,000-11,500 years BP and beyond, it testifies to at least half a million years of human evolution. Significantly, the site demonstrates the unique existence of both. Neanderthals and Early Anatomically Modern Humans (EAMH) within the same Middle Palaeolithic cultural framework, the Mousterian. As such, it has become a key site of the chrono-stratigraphic framework for human evolution in general, and the prehistory of the Levant in particular. Research at Nahal Me'arot/ Wadi el-Mughara Caves has been ongoing since 1928, and continues to promote multidisciplinary scientific dialogue. The potential for further excavation and archaeological research at the site is to date far from exhausted.

Criterion (v): The Nahal Me'arot/ Wadi el-Mughara Caves are a central site of the Natufian culture in its Mediterranean core zone. This significant regional culture of the late Epi-Palaeolithic period presents the transition from Palaeolithic to Neolithic ways of life, from nomadic to complex, sedentary communities, bearing testimony to the last hunter-gatherer society and the various adaptations it underwent on the threshold of agriculture.

The Nahal Me’arot/Wadi el-Mughara site includes all elements necessary to express the values of the property, comprising the caves and the visual habitat. The caves are intact, in good condition and do not suffer from neglect, except in the case of Skhul Cave, which has been partly defaced with graffiti. The visual habitat defined as the caves, the terrace in which the caves are found and the area that can be viewed from the caves is intact except below Skhul Cave, where Eucalyptus trees are growing along the riverbed around the water pumping station.

Archaeological research over 90 years has established the authenticity of the Nahal Me’arot/Wadi el-Mughara site as a crucial record of human, biological, behavioural and cultural origins. The caves, terraces and excavated structures, together with excavated artefacts and human remains, truthfully and credibly express the values of the property. The authenticity of the habitat is impacted by the alien Eucalyptus trees and water pumping station.

A steering committee of stakeholders was established to oversee the nomination and will serve as a governing body that integrates local, regional, and national management of the site. The steering committee includes representatives of the INPA, the IAA, archaeologists from Haifa University, the Carmel Drainage Authority, Kibbutz Ein HaCarmel and Moshav Geva Carmel (who leases the agricultural land designated as Buffer Zone B), the Society for the Protection of Nature in Israel, the Society for the Preservation of Israel Heritage Sites, the Carmelim Tourism Organization, and the Hof HaCarmel Regional Council. A Site Conservation and Management Programme describing all management procedures for the site was prepared in 2003 and currently serves as the foundation for the day to day management of the site.