The List Syracuse and the Rocky Necropolis of Pantalica
Print

Syracuse and the Rocky Necropolis of Pantalica

Syracuse and the Rocky Necropolis of Pantalica

The site consists of two separate elements, containing outstanding vestiges dating back to Greek and Roman times: The Necropolis of Pantalica contains over 5,000 tombs cut into the rock near open stone quarries, most of them dating from the 13th to 7th centuries BC. Vestiges of the Byzantine era also remain in the area, notably the foundations of the Anaktoron (Prince’s Palace). The other part of the property, Ancient Syracuse, includes the nucleus of the city’s foundation as Ortygia by Greeks from Corinth in the 8th century BC. The site of the city, which Cicero described as ‘the greatest Greek city and the most beautiful of all’, retains vestiges such as the Temple of Athena (5th century BC, later transformed to serve as a cathedral), a Greek theatre, a Roman amphitheatre, a fort and more. Many remains bear witness to the troubled history of Sicily, from the Byzantines to the Bourbons, interspersed with the Arabo-Muslims, the Normans, Frederick II of the Hohenstaufen dynasty (1197–1250), the Aragons and the Kingdom of the Two Sicilies. Historic Syracuse offers a unique testimony to the development of Mediterranean civilization over three millennia. 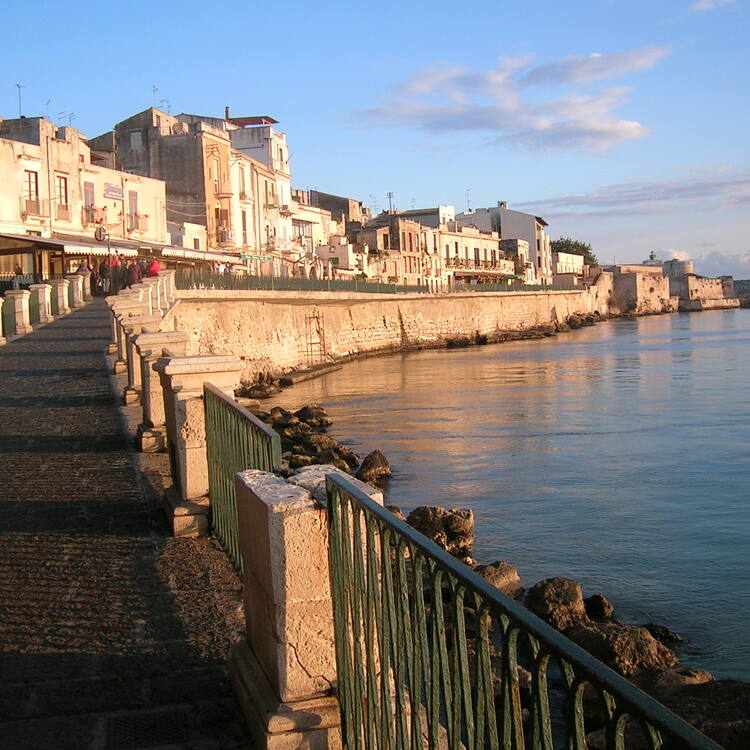 Syracuse and the Rocky Necropolis of Pantalica (Italy) © UNESCO

The site of Syracuse and the Rocky Necropolis of Pantalica on the Mediterranean coast of south-eastern Sicily consists of two separate elements, the historic town of ancient Syracuse and the Necropolis of Pantalica. Together these two components form a unique cultural record that bears a remarkable testimony to Mediterranean cultures from the time of the ancient Greek.

The historic town of ancient Syracuse consists of Ortygia, the historic centre of the city, and today an island that has been inhabited for around 3000 years, and the archaeological area of the Neapolis. Syracuse, the second Greek colony in Sicily was founded by the Corinthians in 743 A.D and described by Cicero as ‘the greatest Greek city and the most beautiful of all’. Syracuse or ‘Pentapolis’ was constructed in five parts, still visible today of which Ortygia is the base of all urbanistic and architectonic developments of successive eras. This area of the property contains traces of the temple of Apollo made in Doric style and the most ancient in Western Greece(6th century B.C.E.), and the temple of Athena, erected for the victory of Gelone over the Carthaginians in 480 A.D., re-used as a church from 6th century C.E. and rebuilt as a Baroque cathedral, in the late 17th century. The Neapolis contains the archaeological remains of sanctuaries and impressive complexes, a theatre, the Latomies, the so-called Tomb of Archimedes and the amphitheatre. Many structures attest to the continuing development of the city through Roman times, from the Byzantines to the Bourbons, interspersed with the Arabo-Muslims, the Normans, Frederick II of the Hohenstaufen dynasty (1197–1250), the Aragons and the Kingdom of the Two Sicilies.

The Necropolis of Pantalica is a rocky outcrop located 40 km. away from Syracuse that contains over 5,000 tombs cut into the rock near open stone quarries. The tombs are spread along a spur over 1200m northeast to southwest and 500m northwest to southeast and most date from the 13th to 7th centuries BC. Associated with the tombs are the remains of dwellings dating from the period of Greek colonisation and other vestiges of the Byzantine notably the foundations of the Anaktoron (Prince’s Palace).

The cultural, architectural and artistic stratification evident in the Syracuse/Pantalica ensemble bears exceptional testimony to the history and cultural diversity of the Syracuse region over three millennia from the ancient Greek period to the Baroque.

Criterion (ii): The ensemble of sites and monuments in Syracuse/Pantalica constitutes a remarkable testimony of the Mediterranean cultures over the centuries.

Criterion (iii): The Syracuse/Pantalica ensemble offers, through its remarkable cultural diversity, an exceptional testimony to the development of civilizations over three millennia.

Criterion (iv): The group of monuments and archaeological sites situated in Syracuse (between the nucleus of Ortygia and the vestiges located throughout the urban area) is the finest example of outstanding architectural creation encompassing several cultural influences (Greek, Roman and Baroque).

The property of Syracuse and the Rocky Necropolis of Pantalica includes all the essential elements that show the Outstanding Universal Value of the property. Each of the three core areas of the property has a substantial buffer zone. Although Syracuse was affected by urbanization and expansion in the second half of the 19th century and even more so in modern times, most of the architectural and monumental developments and structures that date back to its greatest period of splendour are still intact today. All the new developments have taken place outside the recognized areas of historical and archaeological interest.

The most important buildings and structures of the historical centre and the archaeological area (Theatre, Amphitheatre, Monumental Altar of Ieron II, cave of “Orecchio di Dionisio”) are well preserved and the general state of conservation of the majority of the urban and building network has considerably improved due to the protection policies that have been implemented particularly in the last thirty years.

The core area of the Necropolis of Pantalica corresponds to the parts of the site that contain the most important and significant archaeological evidence. Today this area is complete and each element of the rocky villages in the necropolis and in the landscape is perfectly intact and is in an excellent state of conservation.

The authenticity of Syracuse is evident in many of the city’s structures, which retain the same characteristics as during the late Hellenistic period, while other buildings clearly reflect the history of successive cultures over three millennia. The original Hellenistic system and the changes that occurred during the various historical periods have made it possible to clearly distinguish the evidence left in each age and how each culture operated and interacted with the pre-exiting ones.

All restoration works are preceded by meticulous and in-depth research, as well as historical and other subject analyses. They were carried out, as far as possible, maintaining the original characteristics, typologies, building systems and original material according to the most advanced and shared international knowledge in the field of restoration of monuments, under the direct control of technicians and specialist personnel of the Superintendence of Environmental and Cultural Assets.

Despite the fact that the tombs were plundered in different periods, the Rocky Necropolis of Pantalica has a high level of authenticity due to its integrity, good level of conservation and absence of modern developments. It represents an extraordinary landscape as it was in a precise historical period without any significant variations in subsequent times.

The property is protected under the national provisions of the Legislative Decree 42/2004, Code of Cultural Heritage and Landscape, a safeguarding measure that ensures any activity on the site must be authorized by the relevant Superintendence of Environmental and Cultural Assets of Syracuse (peripheral office of the Cultural Heritage and Sicilian Identity).

The areas of the property declared by the State in the past and since 1975 by the Sicilian Region of ‘archaeological interest’ and therefore largely expropriated and registered to the State, are subject to stricter rules for the protection and conservation. The areas registered to the State are managed by the Superintendence Service of Environmental and Cultural Assets of Syracuse. The Region has defined the surface and borders of the Archaeological Park of Syracuse, but this is not instituted as an independent body yet. The Superintendence Service applies the Cultural Heritage Code (Legislative Decree 42 / 2004) and assigns state-owned sites, and operates the tools of government land, protecting and enhancing areas. In addition, the Region proposed a Landscape Territorial Plan that is pending approval. Locally, the General Urban Plan of each municipality, in accordance with the requirements of higher-level tools, identifies the uses of non-state-owned areas and the manner and extent of urban transformation. The activities of the Superintendent are controlled by the Regional Directorate of the Department of Cultural Heritage.

The Department of Cultural Heritage of the Assessorato for Cultural Heritage and Sicilian Identity coordinates the actions within the vast territory, which includes the areas of the city of Syracuse and the Necropolis of Pantalica, through the Superintendence Service of Environmental and Cultural Assets of Syracuse. This Superintendence is responsible for all activities involving the protection for emergency treatment, implementing archaeological research, restoration, enhancement as well as to ensure the use, protection and preservation of cultural heritage. Activities aimed to enhance, promote and protect the landscape are under the responsibility of the Superintendence Service. The Municipalities of Syracuse, Sortino, Ferla and Cassaro have expertise in tourism promotion of the territory and on its roads, at a provincial level.

A Management Plan for the property has been prepared by the Superintendence Service with the involvement of the municipalities. The vision of the Management Plan is to safeguard the cultural heritage and to conserve the stratified urban fabric; to support traditional socio-economic interrelations and cultural production; to improve the quality of life, maintaining mixed uses, increasing security and hygiene, as well as to raise awareness and understanding of heritage resources. Management of the property requires combining conservation processes with the needs of a living and evolving urban landscape.

The necropolis of Pantalica is located in a zone that is distant from all urban areas and industrial facilities, and there are few risks to the site. Syracuse on the other hand is located near a zone of large-scale industries and in a modern urban fabric. This means it is potentially subject to various kinds of risks such as air and noise pollution and illegal development. These risks are currently reduced by environmental protection mechanisms and surveillance.

City and Province of Syracuse, Sicily