The World Heritage Centre and ICOMOS have been informed by several NGOs about the development of the high-speed (AVE) railway line Madrid–Zaragoza–Barcelona–French Frontier, which will involve the construction of a tunnel underneath the city of Barcelona.

By letter of 23 January 2008, the State Party provided comprehensive information on the state of project planning and technical assessments made and further informed that the final routing of the tunnel had not yet been determined.

Considerable public concern has been expressed over the appearance of cracks in buildings along the tunnel parts already constructed outside Barcelona and over the possibility of similar impacts on the city centre of Barcelona. The tunnel section considered to threaten the Church of the Sagrada Familia would cross Mallorca Street with the tunnel being approximately 12m in diameter and located at a depth of 30m and at a distance of 3–4 m from the Glory facade of the Church. To prevent potential damage from the tunnel construction and passage of the high-speed train, the tunnel construction team has proposed to build a reinforced concrete slurry wall 240m long and 42m deep composed of 1.5m piles separated by 2m. This wall will be 1.75m from the foundations of the church and 0.75m from the tunnel.

The Construction Committee of the Church of the Sagrada Familia has received a number of specialist reports, which have been studied by ICOMOS in conjunction with the documentation supplied by the State Party. ICOMOS is concerned that the construction of the tunnel and protective wall threaten the structural integrity of the church as a result, inter alia, of differential movements greater than those foreseen in the construction project for the church and of potential future geological movements. ICOMOS notes that when the Nativity towers were being built they settled a few centimetres because of their weight and the characteristics of their stone and lime mortar foundations, causing cracks in the facade and adjacent windows.

Furthermore, ICOMOS points out potential threats to the fragile structures of the church from the impact of the vibrations caused by the passage of trains. The high-speed passage of trains made up of 80t carriages will produce waves of vibration that will be transmitted to the ground both through the air and directly through the rails. The vibrations will propagate through the ground to the foundations and from these to the building structure. The pile wall as currently proposed is not considered to be a sufficient protective measure against this type of impact.

The concern of ICOMOS is based, among other reasons, on the lack of an evaluation of the dynamic impact that will be caused by the vibrations produced on the fragile structure and foundations of the church and on the pile wall. In addition, a study is lacking on how these vibrations may affect the durability of the church, both the vaults and the rest of the building structures.

ICOMOS further notes that, in addition to potential irreparable damage to the structure of the church, there is a risk of physical injuries to people from possible falling objects.

In response to objections made by the Construction Committee of the Church, a report from the Spanish Ministry of the Environment states that the use of an EPBS tunnelling machine, together with monitoring equipment, would ensure that the Church would not be affected adversely by the construction of the tunnel or the passage of high-speed trains once in operation.

Despite these assurances, the World Heritage Centre and ICOMOS are not convinced that the Church would be 100% safe from adverse impacts, neither during the construction of the tunnel nor in its future use. In its opinion, the more prudent solution, and one more in keeping with the obligations of the State Party towards a World Heritage property, would be to re-route this section of tunnel at a greater distance from the monument and any other part of the World Heritage properties located in its vicinity. 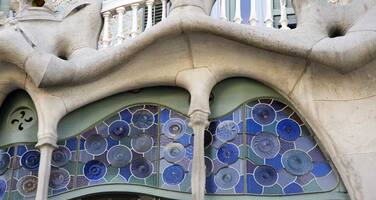