a) Quality of new design projects in the inscribed zone;

c) Confusion over definition and extent of inscribed property and its buffer zones.

Total amount provided to the property: USD 18,000 from the Netherlands Funds-in-Trust

On 28 February 2012, the State Party submitted a state of conservation report requested by the World Heritage Committee at its 35th session (UNESCO, 2011).

The State Party informs that since 2005 systematic work on the retrospective inventory of the property has been carried out by the authorities.  A national working group has been formed in 2010 by the Committee on State Control, Use and Protection of Historical and Cultural Landmarks of St. Petersburg (KGIOP), with the objective of clarifying the components of the serial property and its boundaries. The State Party also transmitted within the report the conclusions and outcomes of the International Expert Forum on boundary issues held in Saint Petersburg in May 2011 during which an international open-ended group of experts has been established. This group will inventory and clarify the boundaries of the property on the basis of the report prepared by the national working group and the “Atlas” of the World Heritage property’s components prepared by the KGIOP.

The Federal Law "On Cultural Heritage of the Peoples of Russian Federation" is applicable to certain individual structures within the property.

The Master Plan of St. Petersburg, approved in 2005, adopted areas of protection of cultural heritage sites in accordance with the established zone mode. These include historic buildings, skyline, panoramas and views. Parameters for construction and reconstruction are regulated throughout the whole property and in the proposed buffer zone. In 2009, on the basis of the Master Plan, Land Use and Development Rules were adopted, including territorial zoning and city planning regulations which prohibit new construction in the protected areas except for the regeneration of the historical landscape.

The State Party underlined that the recognition of the property as a landmark would not be possible without amendments to the federal legislation. In this regard, since 2011, the City Government is exploring, with the State Duma, ways to enhance the legal protection for the World Heritage property.

The St. Petersburg Government by its Decree of 8 December 2010 invalidated its previously issued decision of 22 September 2009 which provided authorization for deviation from the boundary parameters of construction of "Okhta-Center". The project of the “Okhta Centre” tower construction was cancelled. The revised architectural project has not been officially submitted to any authority yet. In September 2011, the investor Joint Stock Company “Gazprom” requested the authorities to submit to the World Heritage Centre within the framework of Paragraph 172 of the Operational Guidelines a formal request of information regarding the international rules of law and procedures of the approval of a new project of the Lakhta Public and Business Center. Following a letter of the World Heritage Centre of 25 October 2011, the State Party submitted within the report an explanatory note prepared by the investor clarifying the exact situation of a new location and providing information about the new project of the Lakhta Center.

The new construction is planned in Primorskiy District of St. Petersburg, on the outskirts of the city, 6 miles away from the historic center of St. Petersburg. According to the State Party, the plot of land for the project was not classified as an area of historical and cultural significance and is located outside the zones of protection of cultural heritage and does not fall within the boundaries of the protected areas of World Heritage or their buffer zones. The Russian State Hydrometeorological University carried out a special assessment of climatic characteristics in the Primorskiy District which concluded that the cloudy weather prevailing in St. Petersburg (237 to 256 days a year) makes it difficult to observe the tall building up to its top and retains only the lower 100 - 200 meters visible.

The concept of the project includes construction of a skyscraper with a major office (the same design developed for the “Okhta Center” tower is used for the “Lakhta Center”), research and sports center, yacht club, career oriented park for children, hotel, exhibition halls, as well as shopping and entertainment facilities. The Kalinin District federal court of St. Petersburg, and later at the Municipal Court of St. Petersburg, has recognized the legitimacy of the investor’s permission because it will not affect the visual perception of the protected panoramas. In June 2011 public hearings were held in the Primorskiy District regarding the Lakhta business Center.

e) Management of the property

The supervision over the status of the property is carried out by KGIOP and the Department for State Protection, Preservation and Use of the Cultural Heritage Properties of the Committee for Culture of the Government of Leningrad Region, within the limits of their authority. The possibility to coordinate actions of the entities of the Russian Federation is very complicated due to the fact that each of these constituent entities, in accordance with the current Russian law carries out economic activities on its territory based on its own financial plans and independent master plans for development of their territory.

The Government of St. Petersburg has established preservation of the historic centre as a priority which prevails over the concept of compromise and so-called rational balance between preservation and development. The development of a long-term programme for the conservation and restoration of the Historic Center of St. Petersburg (2012-2018) has been started in order to provide comprehensive rehabilitation of the historic environment, taking into account social interests and interests of private investors.

The report informs that the Governor of St. Petersburg has engaged in a dialogue with the public city-protection movement, through the Committee on Protection of Landmarks. Representatives of social organizations and movements are members of the Council for the Conservation of Cultural Heritage of the Government of St. Petersburg.

The World Heritage Centre and the Advisory Bodies note that certain key issues related to the property’s preservation addressed by the 2010 reactive monitoring mission still remain unresolved. These include the lack of a joint Master Plan of the property’s entire territory and its buffer zone in St. Petersburg and Leningrad Region proposing the legal protection modes in accordance with principles of integrated conservation. Also, the management of the property is still shared between two Federal entities. There is no Management Plan for the property, which might cover stakeholders, activities and resources. The World Heritage Centre and the Advisory Bodies would like to recall the recommendations of two previous monitoring missions concerning the designation of a principal management authority with sufficient authority to control the authenticity and integrity of the property, as well as the need to develop an overall Management Plan for the property.

Finally, they also note the submission of the revised draft Statement of Outstanding Universal Value.

4.   Welcomes the efforts of the State Party deployed for cancelation of the “Okhta-Center” tower project, also notes the development of a new skyscraper project of the Lakhta business Center in the Primorskiy District of St. Petersburg and requests the State Party to submit to the World Heritage Centre for review by the Advisory Bodies, a detailed heritage impact assessment for this new project prepared in conformity with the ICOMOS Guidance on Heritage Impact Assessments for World Heritage cultural properties, before any final decisions are made;

6.   Also invites the State Party to study, in coordination with the World Heritage Centre, the feasibility to develop a legal mechanism for the protection and management of the World Heritage properties in the Russian Federation;

7.   Takes note that the State Party submitted a draft retrospective Statement of Outstanding Universal Value for the property, as requested in Decision 35 COM 7B.104;

4. Welcomes the efforts of the State Party deployed for cancelation of the "Okhta-Center" tower project, also notes the development of a new skyscraper project of the Lakhta business Center in the Primorskiy District of St. Petersburg and requests the State Party to submit to the World Heritage Centre for review by the Advisory Bodies, a detailed heritage impact assessment for this new project prepared in conformity with the ICOMOS Guidance on Heritage Impact Assessments for World Heritage cultural properties, before any final decisions are made;

7. Takes note that the State Party submitted a draft retrospective Statement of Outstanding Universal Value for the property, as requested in Decision 35 COM 7B.104; 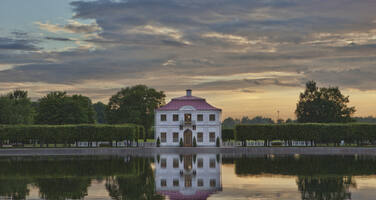