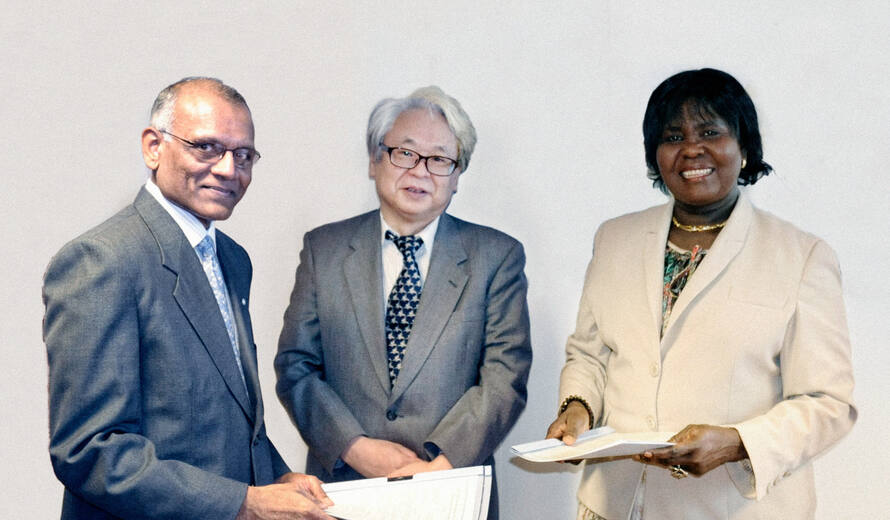 On 1st March 2013, UNESCO signed the Plan of Operation with the Government of Uganda for the project “Technical and financial assistance for the reconstruction of Muzibu-Azaala-Mpanga, architectural masterpiece of the Tombs of Buganda Kings at Kasubi, Uganda, World Heritage property in Danger”, generously supported through the Japanese Funds-in-Trust. Inscribed on the World Heritage List in 2001, the site includes four royal tombs within the Muzibu-Azaala-Mpanga, the main building, which is a masterpiece of Ganda traditional architecture.  This huge structure made of wood, reeds, bark cloth and dry grass was destroyed by fire on 16th March 2010.

Ambassador Napeyok expressed Uganda’s commitment to ensure the protection of the site, and said: “I would like to convey our gratefulness to the Japan Government for reacting so naturally to assist with the reconstruction of our unique cultural World Heritage site.”

Ambassador Kiso expressed appreciation for the coordination of the project by UNESCO, and congratulated the Uganda Government for having put together all the necessary arrangements to ensure a satisfactory reconstruction.

The project aims to set up an efficient risk prevention scheme at the site, with all necessary equipment and support for the cost of qualified supervision for the reconstruction of the destroyed roof. In addition, the project aims to provide scientific support to the team in charge of reconstruction to ensure that the outstanding universal values of the site, both tangible and intangible, are maintained. The proposal was prepared as a result of the missions conducted to the property by the UNESCO World Heritage Centre and the experts made available by the Government of Japan through the Japanese Funds-in-Trust for the Preservation of the World Cultural Heritage.

“This signing truly reflects the spirit of the Convention, when the international community comes together to help preserve a World Heritage site in danger. I would like to sincerely thank the Government of Japan for providing both its technical and financial support for the reconstruction of the Kasubi Tombs.”

The Tombs of Buganda Kings at Kasubi were inscribed on the World Heritage List in Danger in 2010, after the fire. They cover almost 30 ha of hillside within Kampala. Most of the site is agricultural, and the hilltop is the former palace of powerful King Muteesa I, built in 1882 and converted into a royal burial ground when he died in 1884.