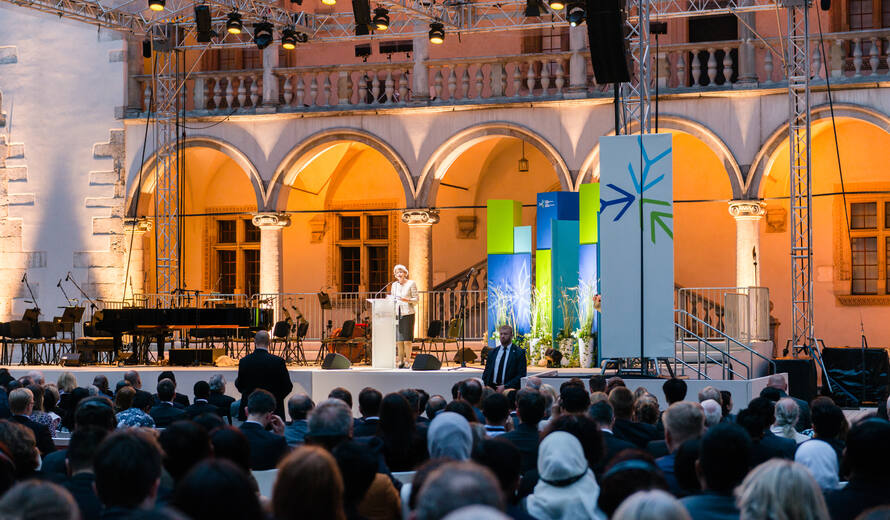 Opening Ceremony of 41st Session of World Heritage Commitee with the participation of the President of the Republic of Poland Andrzej Duda, Deputy Prime Minister, Minister of Culture and National Heritage prof. Piotr Gliński and UNESCO Director-General Irina Bokova on July 2, 2017 in Cracow at Wawel Royal Castle took place the opening ceremony of the 41st session of the UNESCO World Heritage Committee. The opening ceremony was graced by Leszek Możdżer's concert with the Aukso Orchestra. (02/07/2017) © Narodowy Instytut Dziedzictwa / Paweł Suder

The opening ceremony of the 41st session of the World Heritage Committee took place on 2 July at the Royal Palace of Wawel in Krakow, Poland, in the presence of nearly 1,000 people, among them the President of Poland, Andrzej Duda, and other leading personalities. The Committee will be in session until 12 July.

Notable speakers at the opening included the Director-General of UNESCO, Irina Bokova, the Chairperson of UNESCO’s Executive Board, Michael Worbs, the Mayor of Krakow, Jacek Majchrowski, and the Chairperson of the World Heritage Committee, Jacek Purchla.

President Duda welcomed the fact that the Committee was holding its first ever meeting in Poland and went on to speak about Krakow and about UNESCO’s role in safeguarding the city’s historic centre. “The inscription of the city on the World Heritage List in 1978 marked a real turning point for the safeguarding of cultural buildings,” he said.

The President paid further tribute to the World Heritage Committee, which in 1980 inscribed the Historic Centre of Warsaw despite extensive destruction endured by the city during World War II, “because it is the very foundation of our civilization,” he said.

“Today we understand better what is happening elsewhere because of our past,” declared Deputy Prime Minister, Minister of Culture and National Heritage Gliński. “We have learned lessons which we are ready to share with others,” he explained, speaking about the Syrian city of Aleppo.

“Poland, where destroyed cities such as Warsaw were entirely rebuilt, is well aware of the power of culture to give hope and regain confidence. Poland knows that wherever culture is regenerated, a people is regenerated with it”, declared the Director-General of UNESCO as she spoke of the evolution of the role of the World Heritage Convention. “As the Convention grows, so does our responsibility to respect its rules, texts and spirit.”

“The Convention is a unique instrument available to Member States for the celebration of cultural diversity and for the promotion of the wonder and beauty that our planet has to offer,” said Executive Board Chairperson Worbs, who went on to describe World Heritage as “an essential tool for dialogue, respect and awareness of the other.”

Mayor Majchrowski of Krakow announced that the city was preparing to celebrate the 40th anniversary of its inscription on the World Heritage List and spoke of the numerous cultural and artistic events organized for this occasion. “Forty years ago we were trying to save monuments. Today we work on putting them to the best possible use.”

World Heritage Committee Chairperson Purchla for his part said that “with more than 1,000 World Heritage properties inscribed on the List, we can speak of real achievement in terms of success of the World Heritage Convention, one of the few almost universally ratified normative instruments. But this success brings new challenges that have to be addressed, challenges which are endangering the implementation of the Convention as well as its credibility.”