The UNESCO World Heritage Center, the Arab League Educational, Cultural and Scientific Organization (ALECSO) and the National Heritage Institute of Tunisia jointly organize a training workshop for the Maghreb countries on the concepts and mechanisms of the World Heritage Convention and the process of preparing nominations, in Djerba, Tunisia, from 11 to 15 September 2017.

This regional workshop aims in strengthening the capacities of heritage managers and professionals in the preparation of nominations proposals for inclusion of cultural sites to the World Heritage List, with input from international and regional experts, national officials in charge of managing conserving cultural heritage, and the participation of representatives from the civil society.

Hosted by the Tunisian Government and prepared in collaboration with the National Institute of Heritage (INP) in Tunisia, the Association for the Safeguarding of the Island of Djerba (ASSIDJE) and the Permanent Delegation of Tunisia to UNESCO, and funded by the Arab Regional Center for World Heritage (ARC-WH), the training workshop will bring together more than 80 participants and take as a case study the draft nomination proposal for the Island of Djerba, inscribed on the Tentative List of Tunisia since 2012.

In addition, the workshop will bring together the Directors for heritage from the Maghreb countries who will jointly discuss conservation and management challenges in the subregion, as well as the coordination and planning of future activities, in collaboration with ALECSO, ARC-WH and UNESCO. 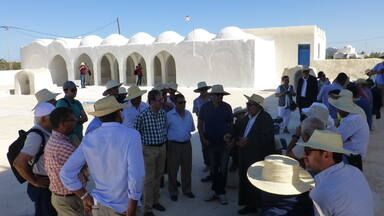 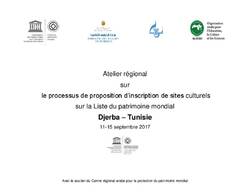