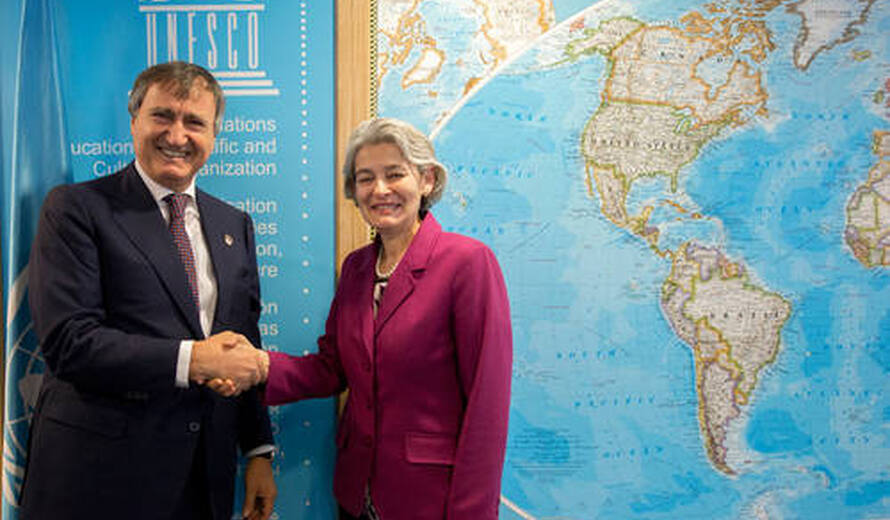 The Director-General of UNESCO, Irina Bokova, received the Mayor of Venice, Mr. Luigi Brugnaro, at UNESCO Headquarters, in the presence of representatives of the Italian government, to discuss the protection of the city of Venice and its Lagoon, a UNESCO World Heritage Site since 1987.

This meeting follows the Director-General's visit to Venice on 3 and 4 November 2016, on the occasion of the 50th anniversary of the Venice flood.

The discussion focused on measures taken by the Italian authorities and the Municipality of Venice to ensure the long-term protection of the site. The meeting of the World Heritage Committee in July 2016 made a number of recommendations and asked that Italy report on its actions before 1 February 2017.

The Italian authorities reaffirmed their total commitment to respond to the concerns raised by the World Heritage Committee in July 2016 regarding the preservation of the city of Venice. This commitment resulted in the adoption of a new "Pact for Venice", signed on 26 November last, planning for the investment of some 457 million Euros in preservation initiatives in the city and its lagoon over the next four years. In addition, as part of the National Strategic Plan for the Development of Tourism presented by the Ministry of Cultural Activities and Tourism on 16 December last, the objective of which is to put sustainable tourism at the center of national policies, a specific pilot action is planned to monitor and manage tourist flows in Venice.

"Venice is a shared heritage of outstanding universal value. Working hand-in-hand, UNESCO with the Government, the Municipality, and all stakeholders, is the only way forward. This morning the mayor of Venice presented to me in detail the great number of measures taken and the concrete projects that he intends to carry out. I understand the strength of the commitment jointly led by the municipality and the Government -- we will continue to move forward in this spirit.” said Irina Bokova.

"My presence today is a sign of Venice’s trust and commitment to the international cooperation. I have presented this morning to the Director-General the progress made during the last 15 months by the city of Venice, which shows a strong commitment to the revitalization of the city and a clear trend reversal. I hope that this meeting will be the starting point of a cooperation that builds a new vision for Venice in the next 20 years, where all are committed to a better future for young people and future generations.” said Mayor Luigi Brugnaro.

The bilateral meeting between the Director-General and the Mayor was followed by working meetings to explore various aspects of the management of the World Heritage site.