The Palmeral of Elche, a landscape of groves of date palms, was formally laid out, with elaborate irrigation systems, at the time the Muslim city of Elche was erected, towards the end of the tenth century A.C., when much of the Iberian peninsula was Arab. The Palmeral is an oasis, a system for agrarian production in arid areas. It is also a unique example of Arab agricultural practices on the European continent. Cultivation of date palms in Elche is known at least since the Iberian times, dating around the fifth century B.C. 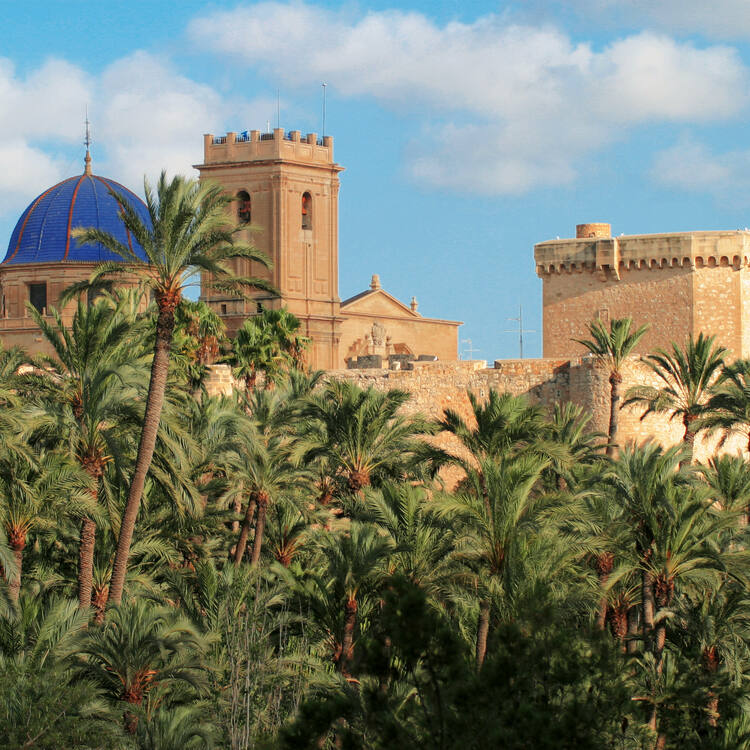 The Palmeral of Elche is the artificial oasis that surrounds the historic town of Elche of Andalusian origin located in the south of the province of Alicante, on the Mediterranean coast of the Iberian Peninsula. It is made up of 67 orchards, containing some 45,000 date palms, covering 144 ha. The landscape of the Palmeral of Elche is a remarkable example of the introduction of a form of agriculture and the acclimatization of an economically profitable species in a new region. The palm grove is a typical component of the North African landscape which was introduced to Europe during the Islamic occupation of a large part of the Iberian Peninsula and which has retained its original form to the present day in Elche.

The foundation of the current city of Elche (in the 10th and 11th centuries) reflected a conception simultaneously associating the city and its production space. The development of the new community depended on the improvement of the surrounding territory through artificial irrigation. The enhancement of the territory of the new Andalusian medina was possible thanks to the establishment of an agricultural system developed in the belt of sterile lands unified by Islam, between the West Saharan and East India-Iran, the artificial oasis of the plain. The design of the medieval city of Elche developed in the manner of the many medinas and fortified cities of the caravan routes of the Islamic orb, a walled enclosure surrounded by palm orchards watered by canals.

The attributes which essentially express the values ​​of the property are the irrigation system with Acequia Mayor (Mother Canal), the regular plot of orchards delimited by rows of date palms, the association of plant species (traditional or recent, such as ornamental plants), the maintenance of irrigation and agriculture traditions, and the landscape of the medieval town surrounded by a dense belt of palm trees.

By a strict order (tandeo), the irrigation system with Acequia Mayor is based on the proportional access to the orthogonal plots for a better control of the water distribution, and on the conciliation of the water use for agricultural and urban purposes.

The palm groves form a compact group in the eastern part of the town of Elche. The boundaries of the plots (huertos) are rectilinear, so that they are mostly square or rectangular, but some are triangular. They are separated by cascabots (fences of plaited palm leaves) or stone walls 1 - 2 metres high. The plots contain the houses of owners or tenants of the land. Elche date palms are of the species Phoenix dactylifera L., native to the Middle East and North Africa. They can grow to a height of 30 m and live over 300 years. The palms are planted in single or double rows, following the lines of the irrigation canals. They produce dates for food consumption and milky white palms that are exported all over the Iberian Peninsula for decoration and Palm Sunday processions.

The design of the property is based on the three-tiered cultivation (date palms, pomegranate and alfalfa) which has endowed the medina of Elche, a new Islamic foundation, with a high-productivity agricultural belt and important urban services. The ingenuity of the hydraulic techniques of the Muslims perfected the water distribution dams (rafas) by creating a large network of irrigation canals that carried the diverted water by means of flow dividers (tallamares), fixed or mobile, which have survived to the present day. All this helped to create an efficient administration of water resources, which were scarce in Elche.

La Palmeral of Elche is an exceptional example of the sustainable use of the environment and the evolutionary adaptation of cultural landscapes to historical changes, as demonstrated by the development of new functional relationships with the modern city of Elche.

Criterion (ii): The palm groves of Elche are a remarkable example of the transference of a characteristic landscape from one culture and continent to another, in this case from North Africa to Europe.

Criterion (v): The palm grove is a typical feature of the North African landscape which was brought to Europe during the Islamic occupation of much of the Iberian Peninsula and has survived to the present day. The ancient irrigation system, which is still functioning, is of special interest.

La Palmeral of Elche maintains within its limits the attributes essential to the representation of its Outstanding Universal Value. The area of ​​the property inscribed on the World Heritage List is adequate. Although the impact of the Industrial Revolution threatened the integrity of the Palmeral from 1884 (passage of the railway through palm orchards, construction of factories and new residential areas), the process of degradation was halted in the decades 1930 and 1950 thanks to the campaign of defense of the Palmeral instigated by Pedro Ibarra, the introduction of legal tools for protection measures and the slowing down of the economic development during the Civil War and the Post-war period. Acceleration in growth since 1960 has resulted in losses, but the principle of protecting palm trees, introduced into urban plans and policies, has allowed the belt of orchards surrounding the historic city to be maintained. While some orchards have lost their original agricultural vocation in favour of new urban uses (public facilities; residential and hotel uses), a significant number of these still retain their original functionality.

La Palmeral of Elche maintains the organization of the orthogonal plot defined by the intersection of rows of palm trees, adapting to the layout of the canals. The orchards maintain the fence that individualizes them. The plots on which the palm groves are planted are faithful to the original system of land allocation and form a unit with the old irrigation system installed during the Islamic period. The association between plant matter, cultivated soil and irrigation water has been preserved. The same is true of traditional elements such as the fences and housing of the orchards, or the gates, canals and mills of the Acequia Mayor. A significant part of the Palmeral responds to traditional agricultural use adapted to the needs of the citizens, and the management systems and working methods typical of palm peasants and sprinklers are still in force. The Palmeral still surrounds the historic city of Elche, contributing to its image as an Islamic city. The environment maintains contemplation points and low-rise, low-density (or simply vacant) construction areas, which allow the unity and singularity of the landscape to be appreciated.

Given the complexity of the property, the preparation of the Special Protection Plan for La Palmeral d’Elche (PEPPE), the equivalent of a management plan, did not begin until 2007; the document is awaiting final approval. The Plan defines in detail the urban and legal land regime, the process for obtaining permits, the land uses and authorized activities, the general construction conditions, the specific conditions for the protection of the built heritage and the landscape, and the regulations on the different types of land use; all in accordance with the boundaries of the property and its buffer zone as defined at the time of inscription on the World Heritage List. The orientations of the PEPPE aim at safeguarding the attributes which express the Outstanding Universal Value of the Palmeral.

The PEPPE proposals are based on detailed documentation which includes cards with descriptive cartography of the palm grove and its orchards, and monographic studies (agricultural system; typology of orchards; irrigation system; problems, pests and diseases of the palm tree). The credibility, veracity and detail of the sources employed will allow limited reconstructions of elements in order to improve the expression of the Outstanding Universal Value of the property where necessary.

The main threat to the palm grove, apart from the presence of plagues such as the Lepidoptera Paysandisia archon, remains the “red palm weevil” (Rhynchophorus ferrugineus), a curculionid beetle native to tropical Asia. Despite the considerable efforts made by the town hall and the Generalitat since 2005, the red palm weevil has spread throughout the municipality.

Actions taken to counter this threat include inspections; control of palm trafficking in nurseries; regular phytosanitary treatment of palm trees using pesticides, and in particular date palms of the Palmeral inscribed on the World Heritage List; captures of individuals using pheromones and kairomones; sanitation or controlled destruction of affected individuals; continuous testing of new treatments, including biological solutions; replacement of affected palm trees in orchards and gardens; and awareness campaigns. 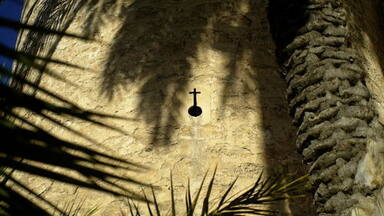