The List Historic Centre of the Town of Diamantina
Print

Diamantina, a colonial village set like a jewel in a necklace of inhospitable rocky mountains, recalls the exploits of diamond prospectors in the 18th century and testifies to the triumph of human cultural and artistic endeavour over the environment. 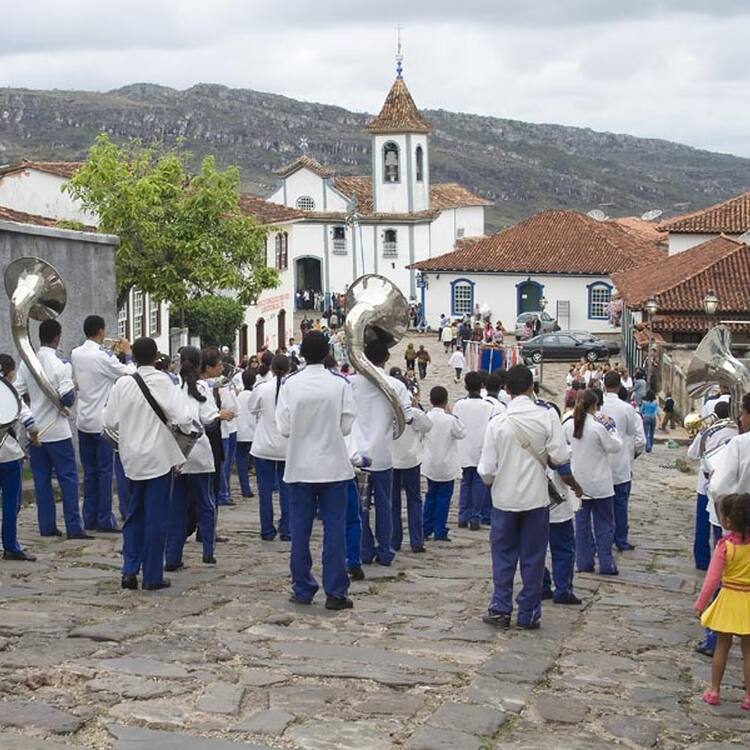 In the heart of arid and rocky mountains in north-east Minas Gerais, the Historic Center of Diamantina rises 150m up the side of a steep valley, with winding and uneven streets following the natural topography. The Baroque architecture differs from that of other Brazilian towns in being of wood, and is distinguished by its geometry and details indicating transference on a modest scale of Portuguese architectural features. Churches have similar colours and textures as civil buildings, and most have only one tower. The regularly aligned 18th and 19th century semi-detached houses with one or two floors are painted in bright colours on a white ground, and contrast with the grey flagstone paving of the streets.

The historic centre testifies to the conquest of Brazil’s interior regions, illustrating how explorers, diamond prospectors, and representatives of the Portuguese Crown forged an original culture in the 18th century, adapting their origins to the realities of the Americas.

Criterion (ii):  Diamantina shows how explorers of the Brazilian territory, diamond prospectors, and representatives of the Crown were able to adapt European models to an American context in the 18th century, thus creating a culture that was faithful to its roots yet completely original.

Criterion (iv):  The urban and architectural group of Diamantina, perfectly integrated into a wild landscape, is a fine example of an adventurous spirit combined with a quest for refinement so typical of human nature.

The Portuguese inspired architectural patterns and urban outline of the Historic Center of Diamantina remains well preserved, both elements ingeniously etched into the surrounding rocky hillsides of varying altitudes that give rise to a stratified city separated from its highest to its lowest points by as much as 150 meters. This association between the natural environment and the urban space created a landscape in which the rugged surrounding territory merges seamlessly with the artistic body of the urban complex.

The urban complex is exemplified by a special configuration marked by the implementation of structures in continuous fashion, cadenced and scaled to the uneven terrain, giving expression to an urban fabric which has been preserved since its formation in the 18th century, as recorded in a variety of maps from the period.

The city’s churches were built based on the same logic applied to the surrounding constructions, reinforcing the architectural complex and a homogeneity characterized by a sober and basic, yet refined, aesthetic of geometric facades.

The historical formation of the former Arraial do Tijuco, continuous appropriation of the related spaces and public roadways through the centuries by traditional religious festivals, and the predominantly residential use of the area are the key elements underlying the attributes that confer on the site its singularity and Outstanding Universal Value.

Protection of the Historical Center of Diamantina was first introduced in 1938 following recognition as a Brazilian Cultural Heritage Site under Process 64-T-38 and effective application of that protection through Decree-Law No. 25/37. Since the 1950s, the National Institute of Historical and Artistic Heritage (Instituto do Patrimônio Histórico e Artístico Nacional – IPHAN) has worked with the city, including through an emergency works team active  at the site.

In 1982 and 1986, the National Historical and Artistic Heritage Service (Serviço do Patrimônio Histórico e Artístico Nacional – SPHAN/National Pro-Memory Foundation (Fundação Nacional Pró-Memória) developed two technical guidelines (Guidelines No. 01/82 and 01/86) for Vila Santa Isabel, a new section created from  removal of land from the Santa Casa de Caridade of Diamantina, with a view to organizing the implementation of new structures to ensure more effective integration of the area with the landmarked site.

The Diamantina Master Plan (Municipal Law No. 035/99), the object of recommendations by ICOMOS for purposes of recognition as a UNESCO Historical Site, establishes parameters for land use and occupation in both the Historical Site and surrounding areas, including at the foot of the Cristais Mountains. An addition safeguard in the legislation involved creation of the Technical Support Group (Grupo de Apoio Técnico – G.A.T) in order to promote joint review between IPHAN and the Municipal Government of new construction projects in areas surrounding the Historical Site.

In 2002, the IPHAN-MG superintendence issued Directive 12/2002 governing the limits and rules for urban-architectural intervention in the city’s architectural and urban complex and the surrounding areas. Among other measures, the Directive enhanced key municipal provision on land use and occupation in areas around the Historical Site.

The State Institute of Historical and Artistic Heritage (Instituto Estadual do Patrimônio Histórico e Artístico  – IEPHA) designated the Cristais Mountains a Natural Property through a Provisional Landmark Designation approved on December 14, 2000, and a Permanent Landmark Designation approved by the State Cultural Heritage Council (Conselho Estadual do Patrimônio Cultural – CONEP) on November 19, 2010, expanding the legal protection of the natural monument, a landscape recognized as inseparable from the Historical Site.

The Monumenta Program, a joint initiative between IPHAN/Ministry of Culture and the Municipal Government has devoted significant financial resources toward management of the cultural heritage and the recovery of essential public and private historical landmark spaces and buildings in the city.

Land marking studies in connection with the Cristais Mountains by IPHAN are currently under development, with a view to strengthening protection of the natural monument, one critical to understanding the context and singularity of the Diamantina Historical Site as a unique landscape.

play_arrow Historic Centre of the Town of Diamantina (UNESCO/NHK)