Built in the 16th century, Morelia is an outstanding example of urban planning which combines the ideas of the Spanish Renaissance with the Mesoamerican experience. Well-adapted to the slopes of the hill site, its streets still follow the original layout. More than 200 historic buildings, all in the region's characteristic pink stone, reflect the town's architectural history, revealing a masterly and eclectic blend of the medieval spirit with Renaissance, Baroque and neoclassical elements. Morelia was the birthplace of several important personalities of independent Mexico and has played a major role in the country's history. 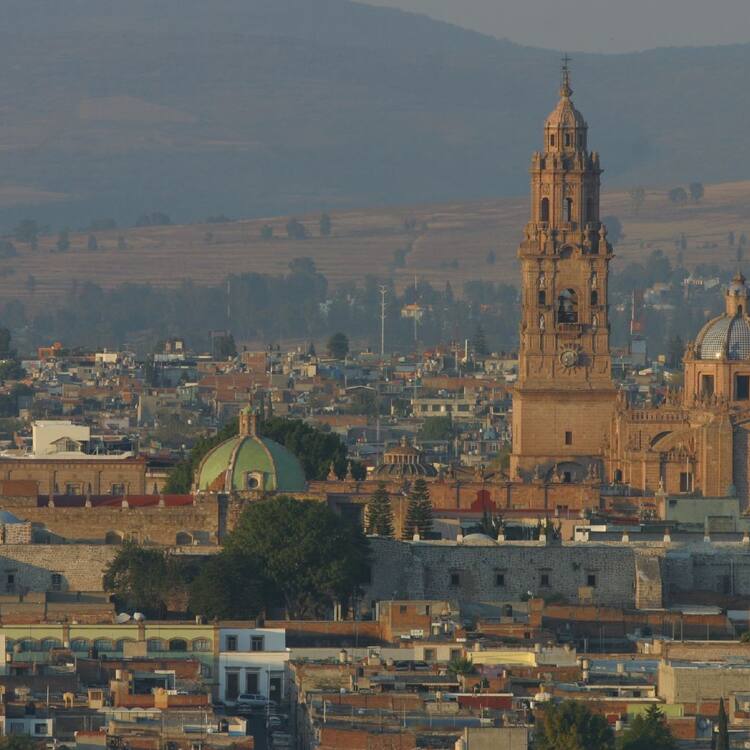 The Historic Centre of Morelia is located in central Mexico, at the foot of the Sierra Madre Occidental and near the agricultural valley of Morelia-Querendaro.  Built in the 16th century according to a "checkerboard" layout, Morelia is an outstanding example of urban development combining town planning theories of Spain and the Mesoamerican experience. Well suited to the slopes of the central hill of the valley, its streets follow the original layout. The city has major axes, numerous urban squares, of which the vast rectangular Zocalo Plaza, and gardens that create an open, airy ensemble with magnificent vistas of the surrounding hills.

The central part of the Historic Centre of Morelia includes 249 monuments of prime importance, of which 21 churches and 20 civil constructions, which crystallize the architectural history of the city. The sobriety of the urban townscape is enhanced by many Baroque facades characteristic of the religious foundations, including the cathedral and the churches of Santa Rosa, de las Monjas and Guadelupe.   Although the majority of the monuments were erected in the 17th and 18th centuries, styles of earlier and later periods (Middle Ages, Renaissance and Neoclassicism) merge in the creation of the "Baroque Moreliano".  Together, they form a harmonious unity that reinforces the measured use of architectural elements in pink stone, the numerous arcades and imposing towers and cupolas covered with azulejos that dominate the city.

Founded in the 16th century under the name of Valladolid, the city was, at the beginning of the 19th century, one of the main centres of the struggle for independence of the country. Two priests received notoriety: Miguel Hidalgo and José María Morelos. It is to the glory of the latter, a native of Valladolid, that the city was renamed Morelia in 1828.

Criterion (ii): The historic centre of Morelia is an outstanding example of urban planning which associates the ideas of the Spanish Renaissance with the Mesoamerican experience.

Criterion (iv): More than two hundred historical buildings reflect the architectural history of the city. In these masterpieces built of pink stone characteristic of the region, the medieval spirit blends with the style of the Renaissance, Baroque, Neoclassical and eclectic elements with exceptional mastery and talent.

Criterion (vi): Morelia was the birthplace of several important personalities of independent Mexico and played an important role in the country's history.

The original model of urban development, which is one of the universal values of the Historic Centre of Morelia has been maintained. In addition, the urban public space has preserved its integrity and the streets still follow the original layout.

Despite the changes of use required to meet the needs of civil society, the monumental Baroque style buildings have preserved their own architectural characteristics. The transformation of old residential buildings to new uses related to tourism has been achieved in respect of the integrity of the inscribed site.

It should be noted, however, that built heritage in good condition is found mainly in the heart of the historic centre. Conservation of the built heritage of traditional and neighbouring quarters has received less attention and the number of buildings in poor condition has increased.

Restoration work on the monumental ensembles, especially religious, was carried out in accordance with the criteria of authenticity of the site. The recuperation of urban areas for community purposes has enabled an appreciation of all their wealth, while promoting their conservation. Dissemination campaigns on the important historical events of Morelia help to strengthen the memory of the Historic Centre. In this regard, various events have been staged to commemorate the Bicentennial of Mexican Independence.

With regard to conservation practice that affected the authenticity of some buildings (the removal of exterior plaster), considered in the evaluation report of ICOMOS in 1990 as inconsistent with the Charter of Venice, a slow recovery process of the facades of significant monuments was initiated following the inscription on the World Heritage List in 1991.

Concerning the aesthetic falsifying of contemporary buildings (application of a colonial facade on a new building), this local construction practice has been restricted since 1993.  The Urban Development Programme for the Historic Centre of Morelia, approved in 2001 by the Municipal Cabildo, henceforth prohibits construction of contemporary buildings that mimic historical styles.

The protection of the Historic Centre of Morelia is ensured by a set of laws, decrees and regulations. The Law relating to heritage preservation and listing, and which aims to ensure the correct use of monuments, and historic, tourist and archaeological areas of the State of Michoacán was enacted in 1974.

In 1983, an agreement between the National Institute of Anthropology and History (INAH) and the State led to the creation of the Technical and Advisory Commission for the Historical Areas and Monuments of the State. At municipal level, the Urban Programmes concerning the historic area are updated every three years.  Since 2005, the Council of Cultural Sites of the Historic Centre of Morelia has been established and the Historic Centre Urban Development Programme (approved in 2001) has been updated. The Site Management Plan has also been finalized.

In 2001, the Catalogue of Historic Monuments of Morelia inventoried 1700 buildings of historical and artistic value in the Historic Centre of Morelia (area of historic monuments) and the buffer zone. Between 1993 and 2007, State intervention in the restoration of listed monuments generated investments amounting to 256 million pesos.

Heritage management by the State aims at its preservation and use in support of regional development through tourism. The Federal Decree of 5 September 2005 offers financial incentives to encourage private sector investment in the restoration and rehabilitation of built heritage. The municipal law in force since 1998 provides tax exemptions and technical guidance for heritage conservation.  Unfortunately, these protection tools are ignored by the majority of the owners.

The Historic Centre of Morelia was consolidated through a series of policies for tourism development in the framework of the General Decree. The public policies applied since the inscription of the site on the World Heritage List, the channelling of public investment projects towards projects concerning buildings and heritage areas, as well as the urban public space redemption process, have positioned tourism as an important vector of economic development. The long-term vision of the municipality is to make Morelia a world class sustainable city, by improving the quality of life of its inhabitants, through economic development and the presence of effective public services, all in harmony with the environment.

The strategic priorities are the completion and publication of the Historic Centre Management Programme and the generation of a normative and legal instrument that ensures long-term integrated management. It is also important to control pressure from the real estate and tourism sector, cope with the loss of housing, and tackle problems related to transportation (roads, public transport, heavy traffic, congestion). Likewise important is to set up an independent evaluation system, external to government agencies, to guarantee objectivity and academic rigour.