Kunya-Urgench is situated in north-western Turkmenistan, on the left bank of the Amu Daria River. Urgench was the capital of the Khorezm region, part of the Achaemenid Empire. The old town contains a series of monuments mainly from the 11th to 16th centuries, including a mosque, the gates of a caravanserai, fortresses, mausoleums and a 60-m high minaret. The monuments testify to outstanding achievements in architecture and craftsmanship whose influence reached Iran and Afghanistan, and later the architecture of the Mogul Empire of 16th-century India. 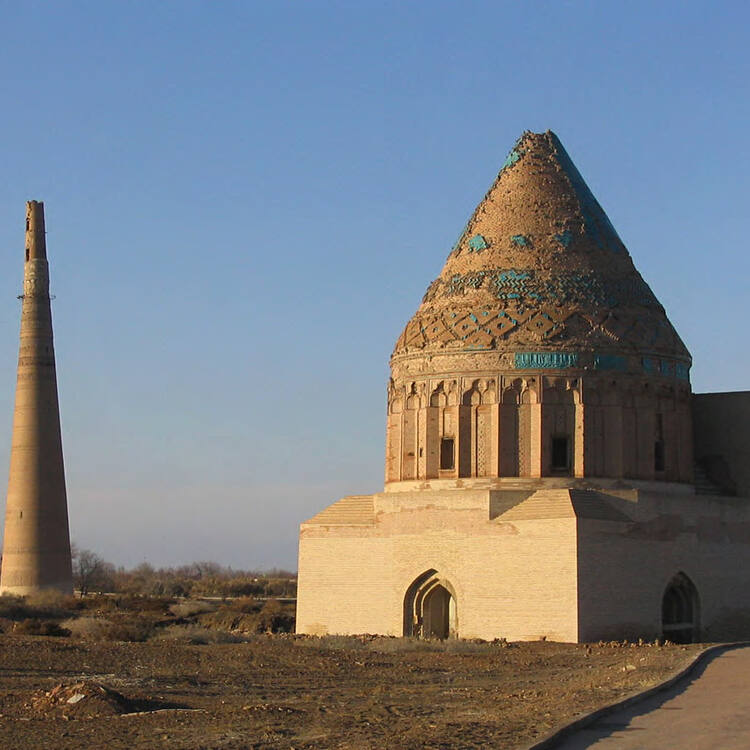 Kunya-Urgench is located in the territory of Dashoguz velayat of Turkmenistan. It is situated in the north-western Turkmenistan, on the left bank of the Amu-Daria River. Urgench was the capital of the Khorezm region, which was part of the Achaemenid Empire.

The old town area contains series of monuments mainly from the 11th to 16th centuries.  This area has remained a vast deserted land with some remains of ancient fortified settlements, including a mosque, the gates of a caravanserai, fortresses, mausoleums and a 60-m high minaret.

On the sample of Kunya-Urgench monuments one can see all variety of methods and décor of Islamic architecture of Central Asia. There are constructions from adobe and burned bricks, plain unicameral dome constructions up-going to ancient chartak and buildings with complicated compositions, sometimes with а long history of development, repair and reconstruction. These monuments also demonstrate the evolution of methods of treatment of inner surface of domes from cellular sails to stalactite those times called “muqarnas” and brought to the highest perfection by local masters. The best monuments of this city are distinguished by high degree of decorativeness. They provide prominent examples of classical arabesques in monochrome terra-cotta and bright colorfulness of enamel.

The monuments testify to outstanding achievements in architecture and craftsmanship whose influence reached Iran and Afghanistan, and later the architecture of the Mogul Empire of 16th-century India. The Islamic sacred objects concentrated in this city are exceptionally popular places for pilgrims and serve attractive objects for the international tourism.

Criterion (ii): The tradition of architecture expressed in the design and craftsmanship of Kunya-Urgench has been influential in the wider region to the south and southwest i.e. in Iran and Afghanistan, and later in the architecture of the Mogul Empire (India, 16th century).

Criterion (iii): Kunya-Urgench provides an exceptional testimony to a cultural tradition (the Islamic culture of the Khorezm) and is unique in its state of preservation. The society that created this centre has disappeared; however we note that most of visitors are in fact pilgrims from the region.

The overall integrity of Kunya-Urgench as an archaeological site results from its historical condition. Having been abandoned for more than three centuries, and then used as a graveyard, the area has remained relatively intact. Accordingly, Kunya-Urgench is considered to have retained its integrity better than most other sites in Central Asia as the attributes of the property are still present.

The authenticity of the property has been preserved in the site layout and the use and the function of the site as a religious centre which is still continuing. It is also preserved as a prominent pilgrimage centre of Islam.

Although the individual monuments are in variable conditions, the principal monuments have retained a substantial amount of original material, representing a reasonable level of authenticity. Other buildings have remained untouched or been more or less substantially reconstructed.  The individual monuments have been subject to various degrees of repair, restoration and reconstruction. Seeing the condition before repair, it can be appreciated that in some cases the choice was a complete collapse or partial reconstruction. While taking note of the several reconstructions of individual buildings, the principal monuments are still considered to have retained a reasonable level of authenticity.

The property is protected by national legislation and also has local protection by the local municipality.  The State Historical and Cultural Park “Kunya-Urgench”, which contains the inscribed property within its limits, was created in 1985 (decree n° 10085). It is registered at the Vilayet (provincial) level (decree 440/16), approved by the State Cabinet of Ministers in 1992. In addition, there are special bylaws, for example, for the protection of the area identified as the buffer zone. The legal protection of the property and its buffer zone is adequate.

All elements of the property are included in the National Heritage List. Listing in the National Heritage List implies that any proposed action to be taken inside or outside of boundaries of a National Heritage place or a World Heritage property that may have a significant impact on the heritage values is prohibited without the approval of the authorized government body. A protection agreement which secures an inviolability of monuments and maintenance of conditions of economic activities and new constructions within boundaries of the buffer zone has been concluded between administration of the State Historical and Cultural Park “Kunya-Urgench” and local municipal authorities.

The property is currently in a good state of conservation with regular maintenance undertaken according to a maintenance schedule.

There are two agencies with management authority: at the local level the administration of the State Historical and Cultural Park “Kunya-Urgench”, and at the central level the National Department for the Protection, Study and Restoration of the Historical and Cultural Monuments in Turkmenistan (DPM) in Ashgabat. There is a general management system for the general policies of management and conservation of heritage sites. The system also provides general guidelines. More detailed plans are developed on the basis of these guidelines. Such is the case also with the Kunya-Urgench, which includes a set of guidelines and annual work plans, controlling protection, research and monitoring.

A management plan is currently in place for the property which takes into account a wide range of measures for planning and heritage legislation and policies of the Turkmenistan Government providing the policy framework for the conservation and management of the property which is scheduled to be updated every six years.

In regard to long term management issues, the property requires balanced management of conservation activities and passing both traditional and modern conservation techniques from one generation to the next. Management of high pressure from tourism and urban growth also will be a long-term concern.