The island of Reichenau on Lake Constance preserves the traces of the Benedictine monastery, founded in 724, which exercised remarkable spiritual, intellectual and artistic influence. The churches of St Mary and Marcus, St Peter and St Paul, and St George, mainly built between the 9th and 11th centuries, provide a panorama of early medieval monastic architecture in central Europe. Their wall paintings bear witness to impressive artistic activity. 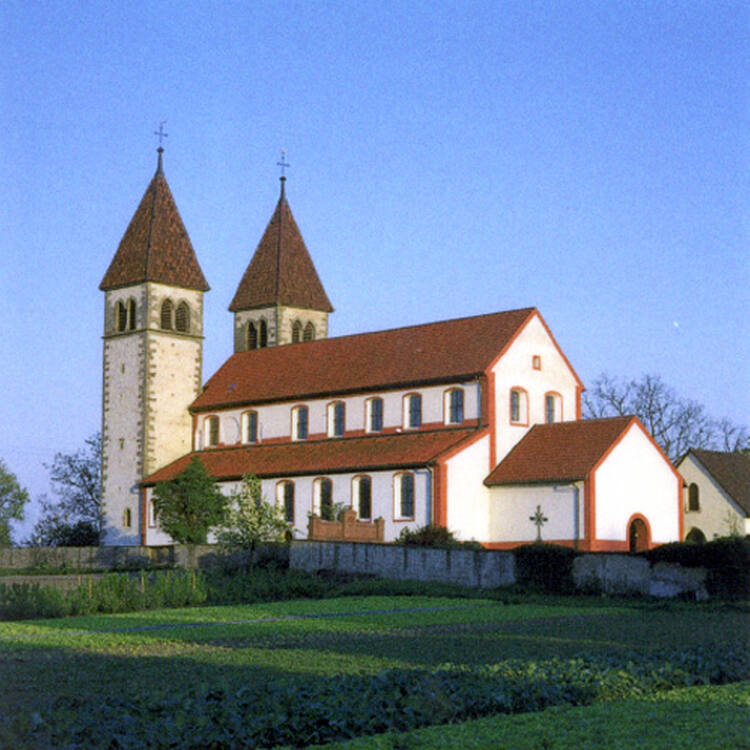 The Monastic Island of Reichenau on Lake Constance in south-west Germany represents a masterpiece of human creative genius as the ensemble of the three churches on the monastic island constitutes an exceptional example of an integrated group of medieval churches retaining elements of Carolingian, Ottonian, and Salian architecture that are relevant to the history of architecture. The Benedictine monastery was an important artistic centre of its time, superbly illustrated by its monumental wall paintings and its illuminations, and is of great significance to the art history in Europe of the 10th and 11th centuries.

The crossing, transepts, and chancel of the Carolingian cruciform basilica of Mittelzell, consecrated in 816, are exceptional both in their size and their excellent state of conservation, and constitute a major example of this particular type of crossing (ausgeschiedene Vierung) in Europe. Equally important are the surviving parts of the Carolingian monastery with a heating system modelled according to ancient Roman examples. The transepts and apse of the church of St Mary and Mark (1048), linked to the Carolingian parts by the nave, are equally important to the history of European architecture. The wall paintings in the apse of the church of St Peter and Paul at Niederzell are of exceptional quality, and constitute one of the earliest depictions of the Maiestas surviving north of the Alps. The wall paintings decorating the nave of the church of St George at Oberzell are artistically outstanding and constitute the only example of a complete and largely preserved set of pre-1000 scenic wall paintings north of the Alps.

Criterion (iii): The remains of the Reichenau foundation bear outstanding witness to the religious and cultural role of a great Benedictine monastery in the early Middle Ages.

Criterion (iv): The churches on the island of Reichenau retain remarkable elements of several stages of construction and thus offer outstanding examples of monastic architecture in Central Europe from the 9th to the 11th centuries.

Criterion (vi): The Monastery of Reichenau was an important artistic centre of great significance to the history of art in Europe in the 10th and 11th centuries, as is superbly illustrated by its monumental wall paintings and its illuminations.

All elements necessary to express the Outstanding Universal Value are present in the dispersed buildings across the island, a legacy of the socio-economic structure of the Middle Ages, which has shaped the image of the entire foundation.

The clusters of dwellings do not constitute real groups of buildings, a characteristic that persisted even after secularisation and the spate of building that followed World War II. The secular architecture is dominated by certain recent modifications and/or contemporary constructions. Any original structure that survives has been revealed or is accessible to architectural research. Nature conservation sites designated to separate sectors of recent construction from agricultural land (now given over largely to hothouses) help to give an idea of the original aspect of the island. The medieval-style reconstructions characteristic of the 19th century, detrimental to the Renaissance and Baroque additions, has largely been eliminated. This practice has therefore reduced the complex historic stratification of these buildings, particularly their interiors. While the architectural surfaces of the Reichenau churches have been entirely renovated and simplified, corresponding to the conventional image of medieval church architecture, the authenticity of the remarkable wall paintings in the churches is, however, a positive element.

The three churches, the monastic buildings, and ten other buildings on the island have been designated as cultural monuments of outstanding value under the Law for the Protection of Cultural Monuments of the Land of Baden-Württemberg (Denkmalschutzgesetz Baden-Württemberg of 25 May 1971, revised on 25 April 2007). The same law protects seventy other properties as designated cultural monuments. Under the terms of the law, any construction project or modification to a cultural monument must be submitted to the Administration for the Protection of Historic Monuments of Baden-Württemberg (Freiburg im Breisgau Division), which is represented at local level by the District of Constance Administration. Cultural monuments of outstanding value enjoy further protection by being listed in the Inventory of Monuments (Denkmalbuch), which applies to cases of reconstruction or extension of such monuments. In these cases, approval must be sought for any project affecting the surroundings of a listed monument, if these surroundings are of particular importance to the monument.

Ownership of the religious buildings on the island of Reichenau is shared between a number of institutions. The Abbey of St Mary and Mark and the presbytery at Mittelzell belong to the parish of Our Lady, the town hall to the Town Council of Reichenau, the Church of St George to the Catholic Church of St George Fund, and the Church of St Peter and Paul to the Catholic Church Fund. Most of the other buildings on the island are private property. Protection of property owned by the Land of Baden-Württemberg is the responsibility of the Regierungspräsidium of Freiburg and the Landesamt für Denkmalpflege im Regierungspräsidium Stuttgart in conjunction with the Federal Property Administration.

A particular problem concerns the growing visitor numbers at the famous church of St George, resulting in a change of the interior climatic conditions. The rise in humidity with the accompanying pollution and formation of molds causes significant damage to the cultural heritage assets, especially to the Ottonian wall-paintings. Since the beginning of the 1980s, climatic conditions inside St George’s have been continuously recorded. The Landesamt für Denkmalpflege in cooperation with the Technical University of Darmstadt - now University of Stuttgart, Institute for Materials of Architecture – carries out a very precise monitoring of the Ottonian wall-paintings to analyse the indoor climate, micro-climatic impacts, air motion, influence of radiation and influence of visitation on the micro-climate. The collected data are to support a concept and new strategies to optimise the indoor climate, especially to establish a strategy to control the visitors’ access (visitor management). Visitor management for St George shall include replacing entrance for individual visitors by guided tours during critical seasons.

In consultation with the political community, the Organisation of Cultural Heritage Preservation worked out a development programme for a cautious building development to address any risks for development pressure, including the development of hothouses.

Several sectors of the island of Reichenau (some 230 ha out of a total area of 460 ha) have been designated as nature reserves under the Law for Nature Conservation of Baden-Württemberg (Naturschutzgesetz Baden-Württemberg) of 13 December 2005, revised on 17 December 2009. In addition, the Federal Law for Nature Conservation (Bundesnaturschutzgesetz) of 29 July 2009, revised on 28 July 2011, protects landscapes of historic cultural interest, which includes the surroundings of listed monuments. The provisions of the Building Law (Baugesetzbuch of 23 September 2004, revised on 22 July 2011) regarding nature conservation and the protection of landscapes and monuments apply to several sensitive sections of the island, while the building regulations of the Land of Baden-Württemberg (Landesbauordnung für Baden-Württemberg of 8 August 1995, revised on 17 December 2009) apply to the whole of the island. The various development plans for the Municipality of Reichenau, the District of Constance, and the Regional Plan lay down stringent restrictions on the development of new buildings, designed to encourage the preservation of the traditional organisation of the landscape.

There is no official buffer zone for the property, but its island location of Reichenau in the middle of the northern reaches of Lake Constance provides adequate equivalent protection. In addition, the lake shores in the vicinity (Gnadensee, Zellersee, and Untersee) are protected by both German and Swiss nature conservation and planning legislation.

The active and ongoing policy pursued by the administrations responsible for the protection of historic monuments, nature conservation, and planning permission under the terms of the legal provisions in place correspond to the requirements to be legitimately expected of a prescribed management plan. The policy ensures State control over the conservation of the cultural and natural assets on the island of Reichenau and continuous implementation of the necessary conservation and restoration measures. The State Administration for the Protection of Historic Monuments is staffed by highly qualified personnel, guaranteeing the professional level of design and execution of all the necessary conservation measures required for an appropriate management system.