The archaeological site of Samaipata consists of two parts: the hill with its many carvings, believed to have been the ceremonial centre of the old town (14th–16th centuries), and the area to the south of the hill, which formed the administrative and residential district. The huge sculptured rock, dominating the town below, is a unique testimony to pre-Hispanic traditions and beliefs, and has no parallel anywhere in the Americas. 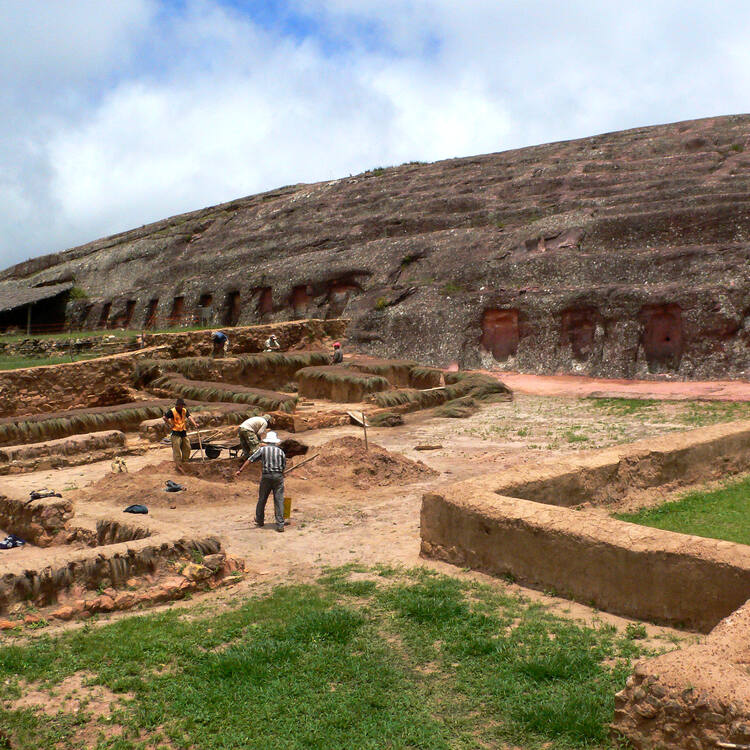 Located in the Province of Florida, Department of Santa Cruz, the archaeological site of Fuerte de Samaipata consists of two clearly identified parts: the hill with its many carvings, believed to have been the Ceremonial Centre and area to the south of the hill, which formed the administrative and residential district and the political administration. The site is known to have been occupied and used as a ritual and residential centre by people belonging to the Mojocoyas culture as early as AD 300, and it was at this time that work began on the shaping of this great rock. It was occupied in the 14th century by the Inca, who made it a provincial capital. This is confirmed by the features that have been discovered by excavation - a large central plaza with monumental public buildings around it and terracing of the neighbouring hillsides for agriculture - which are characteristic of this type of Inca settlement. It formed a bulwark against the incursions of the warlike Chiriguanos of the Chaco region in the 1520s. The strategic location of the site, which had attracted the Inca to it, was also recognized by the Spaniards. The silver mines of the Cerro Rico at Potosí began to be worked in 1545 and the colonial settlement of Samaipata became an important staging post on the highway from Asunción and Santa Cruz to the colonial centres in the High Andes such as La Plata (modern Sucre), Cochabamba and Potosí. With the establishment of the new town of Samaipata in the Valle de la Purificación, the ancient settlement had no further military importance and was abandoned.

The Ceremonial Centre consists of a huge monolithic rock of red sandstone composition of dimensions 220 m long, by approximately 60 m wide, fully carved with a variety of representations of animals, geometric shapes, niches, canals, vessels of great religious significance, which was done by specialist craftsmen, sculptors, with great skill and mastery of the stone. This monument, dominating the town below, is one of the most colossal pre-Columbian ceremonial works of the Andes and the Amazon regions, testimony of hydraulic use, the cult of deities and entities represented in nature as sacred animals in purification and fertility rituals. It is a unique testimony to pre-Hispanic traditions and beliefs, and has no parallel anywhere in the Americas. The carvings in the western part include two felines on a circular base, the only examples of high-relief carving in the whole site. The remains of a stone wall of the Inca period cut across a number of the carvings, indicating a pre-Inca date. These include two parallel channels, between and alongside them there are smaller channels cut in zigzag patterns, giving rise to the local name for this feature, El Dorso de la Serpiente.

At the highest point is Coro de los Sacerdotes, which consists of a deeply cut circle with triangular and rectangular niches cut into its walls. Further to the east is a structure which probably represents the head of a feline. Most of the southern face of the rock was originally dominated by a series of at least five temples or sanctuaries; of which only the niches cut into their walls survive. The Casa Colonial is situated on an artificial platform at the foot of the rock. Excavations have revealed evidence of Inca and pre-Inca structures here, and so it is known as the Plaza of the Three Cultures. The house of the colonial period, only the stone lower walls of which survive, is in characteristic Arab-Andalusian style, with a central open courtyard.

The administrative and political sector is situated on a series of three artificial platforms to the south of the rock. It is made up of a series of architectural structures corresponding to different periods of cultural settlements: the "Ajllahuasi" or house of the chosen - housing for women whose role was to make the clothes of the Inca, as well as to be sacrificed in rituals as wives of the Inca, the compound Kallanka for military use, the "Court" or commercial area which was used for the exchange of products, "Tambo" a space for the provision of arms, clothing and utensils, less complex terraced agricultural crops and residential areas used for surveillance.

The archaeological site of El Fuerte de Samaipata constitutes a complex artistic, architectural and urban form alone testifies to the existence of the extraordinary development of pre-Columbian cultures in the Andes-Amazon region with high ceremonial and religious tradition embodied dramatically the colossal carved stone.

Criterion (ii): The sculptured rock at Samaipata is the dominant ceremonial feature of an urban settlement that represents the apogee of this form of prehispanic religious and political centre.

Criterion (iii): Samaipata bear outstanding witness to the existence in this Andean region of a culture with highly developed religious traditions illustrates dramatically in the form of immense rock sculptures.

The archaeological site of El Fuerte de Samaipata contains all the elements to convey the Outstanding Universal Value of the property. The rock, with carved figures and designs in a single monument, and other archaeological elements, are in a fair state of preservation and their overall integrity has not been affected by developments from cities, and towns. However, environmental factors and weathering constitute threats to their material integrity.

The conservation of the different architectural, urban and genuine characteristics of the rock carvings remain as witnesses of their functionality, beauty and genuine religious significance. The authenticity of the site is very high, since it has been deserted for centuries and only recently the subject of carefully controlled scientific excavation projects. Although it is threatened and subject to natural degradation processes, it maintains its original attributes.

The site was known and visited by 18th century scholars and travellers and was later declared a national monument by Supreme Decree no. 2741 in 1951, under the provisions of the National Monuments Act. This covered 20 ha of the archaeological area and around 260 ha around the site were donated to the State by the landowner in 1997. The total area is protected by Municipal Ordinance no 5/97 of the Municipality of Samaipata as an eco-archaeological park. Subsequently, the Bolivian State, in the theme of conservation, protection and safeguard of El Fuerte de Samaipata, has established regulations on the following levels of government: national, departmental and local. The following legislative measures of protection are focused on guaranteeing the survival of the cultural heritage: The Political Constitution Of the Bolivian State, Art. 191; Law National Monument 8/05/1927; D.S. Complementary procedure on heritage Nº 05918-06/11/1961; and, R.M. Regulation of Excavations N º 082/97-03/06/1997.

The management plan for the property mainly includes the definition of the circuit controlled for visitors, and the technical definition of the treatments for the rock. The Secretariat of Culture, through the DIINAR and the CIAAS, the Municipal Government of Samaipata, and the Prefecture of the Department of Santa Cruz, have included in their Development Plans, the actions related to the conservation of the site emphasizing maintenance and the study of the composition of the rock.

Also, there are number of regional plans that strengthen Samaipata's conservation, and especially to the need to develop a viable tourism strategy, bearing in mind the presence of the National Park Amboró that guarantees the biodiversity and environmental quality of the whole province.