In the 1st century A.D. the Roman Imperial authorities began to exploit the gold deposits of this region in north-west Spain, using a technique based on hydraulic power. After two centuries of working the deposits, the Romans withdrew, leaving a devastated landscape. Since there was no subsequent industrial activity, the dramatic traces of this remarkable ancient technology are visible everywhere as sheer faces in the mountainsides and the vast areas of tailings, now used for agriculture. 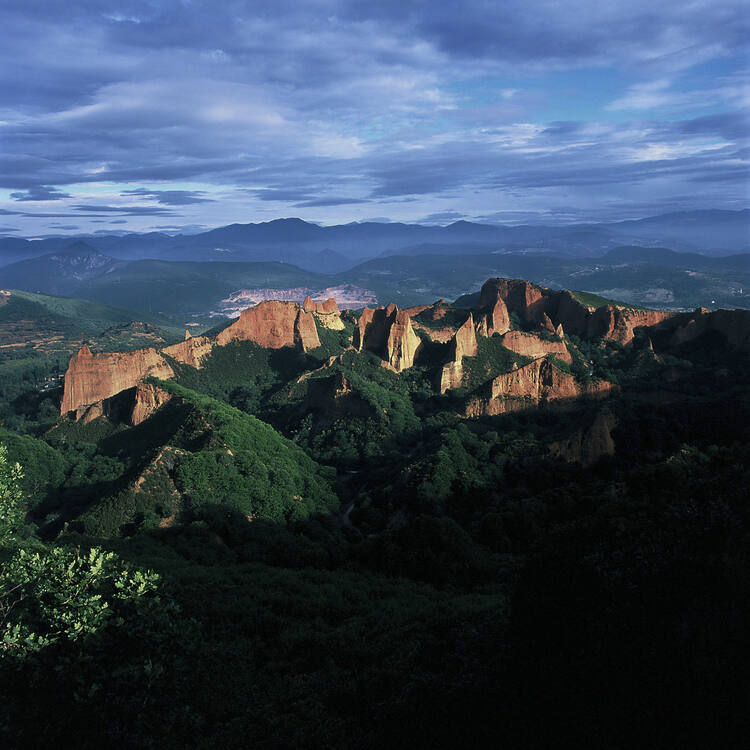 Las Médulas is a Roman mining area located in the Autonomous community of Castile and León, in a mountainous zone in the Northwest of Spain. In the 1st century AD, the Roman Imperial authorities began to exploit the gold deposits of this region, using a technique based on hydraulic power. After two centuries of working the deposits, the Romans withdrew, leaving a devastated landscape. Since there was no subsequent industrial activity, the dramatic traces of this remarkable ancient technology are visible everywhere as sheer faces in the mountainsides and vast areas of tailings, now used for agriculture.

The area inscribed on the World Heritage List, the Archaeological Zone of Las Médulas, covers over 2000 ha. It comprises the mines themselves and also large areas covered by the tailings resulting from the process. There are dams which used to collect the vast amounts of water needed for the mining process and intricate canals through which the water was conveyed to the mines.

There are villages of both the indigenous inhabitants and the Imperial administrative and support personnel (including army units), as well as one major Roman road and a large number of minor routes, used during mining operations. The mining process, known to Pliny as ruina montium, made use of the immense power of large bodies of water. Water from springs, rain and melting snow was collected in large reservoirs, connected to the mines by a system of well-built gravity canals over long distances. They were cut into the sterile strata, many metres deep, over the layers of auriferous conglomerate. When the sluices of the dams were opened, enormous quantities of water flowed into the canals, which were closed at their ends. The pressure thus built up caused the rock to explode and be washed away by the water, forming enormous areas of tailings, several kilometres in length. The process is vividly apparent on the working face at the main Las Médulas site, where the half-sections of the galleries used for the last operation there stand out against the sheer rock face. The layers of the auriferous conglomerate were broken up in the same way, but the friable conglomerate was run through washing channels, the heavy gold particles falling to the bottom of the channels. The non-metallic part escaped to the layers of sterile tailings. The large boulders resulting from this process were removed by hand, as the neat heaps scattered around the landscape demonstrate.

The operating face of this spectacular mining process slowly moved across the landscape. The main Las Médulas pit covers more than 10 km2 and the working face on the subsidiary La Frisga pit is more than 600 m across. The system of water canals and conduits extended for at least 100 km. Contours were used with great skill to maintain even gradients over long distances so as to provide a steady build-up of water when the sluices were opened. These channels, short sections of which have been cleared, can be seen in many parts of the site. Archaeological survey over many years, both on the ground and using aerial observation and photography, has identified a number of settlements within the area. A selected group has been partially excavated and demonstrates the essential differences between the way of life of the indigenous and of the incoming administrative communities.

Criterion (i): Las Médulas is a major work of human creative genius in the field of mining, and specifically the technology of ruina montium, the application of water power, and systems of gold mining on a scale, efficiency, and economic importance that were of decisive economic importance for the Roman Empire in the first two centuries AD.

Criterion (ii): Las Médulas is a remarkable example of the application of Roman mining techniques to exploit precious metals. It is exceptional that subsequent works, which have largely destroyed such evidence elsewhere, were here limited or non-existent, so that this property is unquestionably the best preserved and most representative of all the mining areas of the Greco-Roman world in classical times.

Criterion (iii): The Roman gold-mining operations in the Las Médulas area were the most extensive ones in Antiquity. The spectacular remains illustrate both the remarkable technology and the administration of this Imperial estate in every detail.

Criterion (iv): The Las Médulas gold-mining area is an outstanding example of innovative Roman technology, in which all the elements of the ancient landscape, both industrial and domestic, have survived to an exceptional degree.

Las Médulas has all the necessary elements to express its Outstanding Universal Value, since it includes the Roman mines, large areas where the tailings resulting from the process were deposited, the hydraulic canals used in the process of ruina montium and human settlements related to the mining work.

Las Médulas, due to its location on a rural area, with small communities, shows no negative effects of development.

The Archaeological Zone of Las Médulas was registered as Bien de Interés Cultural (Property of Cultural Interest) in 1998, which means that this property is legally protected at the highest level; the zone was extended in 2007, in order to include all the World Heritage protected area. Furthermore, Las Médulas was declared a Historic Monument in 1931, and a Natural Monument in 2002. It is set under the responsibility of the Junta of Castile and León, through the General Directorate of Cultural Heritage.

Las Médulas is a Natural Monument, so it is also subject to the current Environmental Laws.

The municipalities of Borrenes, Carucedo and Puente de Domingo Flórez have an overall supervisory function in respect of the privately owned properties within their territories. Other institutions working in the area are the Las Médulas Foundation, which collaborates in the promotion of the site (Visitors Centre), and the Consejo Superior de Investigaciones Científicas, which has been leading an archaeological research program for several years and elaborated in 2001, commissioned by the Junta of Castile and León, the first Plan of Organization, Use and Management of Las Médulas.

Las Médulas, besides its declaration as National Monument and Property of Cultural Interest (Bien de Interés Cultural), has been registered as a “Cultural Area” (Espacio Cultural) in 2010. This protection is based on the Law of Cultural Heritage of Castile and León and is applied to those properties that have been already declared Bien de Interés Cultural which, due to their special natural and cultural values, request a preferential attention in their management and promotion. This declaration of “Cultural Area” aims at promoting the cultural and natural values of the site and encouraging all the activities leading to the sustainable development of the area. Its area is larger than that protected by the World Heritage Convention, because it includes the valley surrounding the site and the whole network of canals, aiming at controlling possible negative visual effects on Las Médulas.

For the adequate management of the “Cultural Area”, a Plan has been prepared, with the participation of local communities, the archaeological research team and the assessment of experts, to set the rules referring to protection, conservation, promotion and research, not only for the Archaeological Zone, but also for the World Heritage property. It is a roadmap that sets all the principles and features that the public administrations -at national, regional and local level- must take into account, in order to adapt their policies to the conservation of the Outstanding Universal Value of the site, which must prevail over other considerations. It includes a diagnosis of the state of conservation on the site, its cultural properties (archaeological sites, vernacular architecture, etc.) and the natural ones; and all the criteria to manage the World Heritage property (delimitation of the protected area; archaeological research; visits, accessibility and transport; principles for the urban planning; creation of a management organ which includes all the public administrations, experts and associations, etc.).