Siena is the embodiment of a medieval city. Its inhabitants pursued their rivalry with Florence right into the area of urban planning. Throughout the centuries, they preserved their city's Gothic appearance, acquired between the 12th and 15th centuries. During this period the work of Duccio, the Lorenzetti brothers and Simone Martini was to influence the course of Italian and, more broadly, European art. The whole city of Siena, built around the Piazza del Campo, was devised as a work of art that blends into the surrounding landscape. 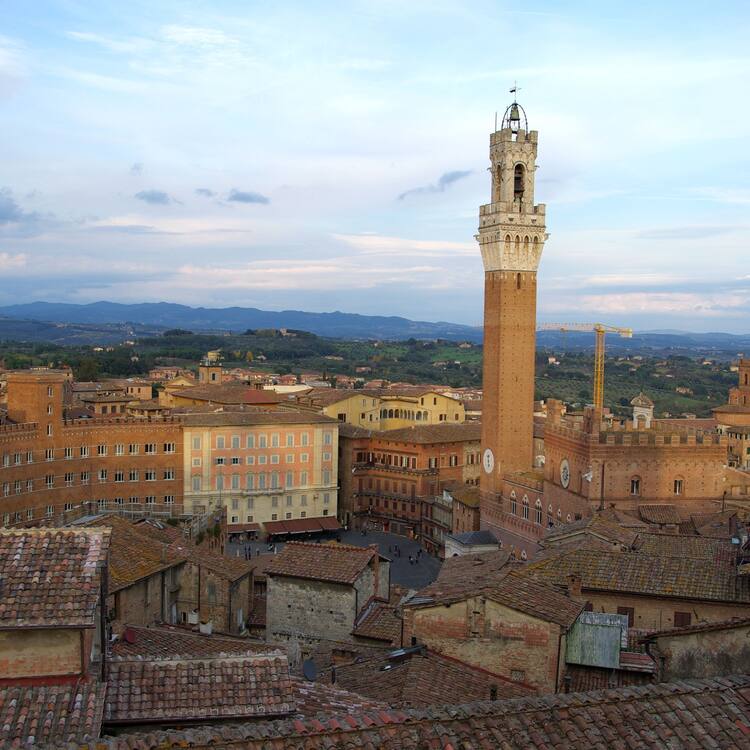 The Historic Centre of Siena is the embodiment of a medieval city. Historically, its inhabitants pursued their competition with the neighbouring cities of Florence and Pisa right into the area of urban planning. Throughout the centuries, the city has preserved its Gothic appearance acquired between the 12th and 15th centuries. During this period, the work of Duccio, the Lorenzetti brothers and Simone Martini influenced the course of Italian and, more broadly, European art. The whole city of Siena was devised as a work of art that blends into the surrounding landscape.

This Tuscan city developed on three hills connected by three major streets forming a Y-shape and intersecting in a valley that became the Piazza del Campo. The seven-kilometre long fortified wall still surrounds the 170-hectare site. Protected gates were doubled at strategic points, such as the Porta Camollia on the road to Florence. To the west, the walls embrace the Fort of Santa Barbara that was rebuilt by the Medici in 1560 and finished in 1580. Inside the walls towerhouses, palaces, churches and other religious structures survive. Also of note are the city’s fountains that continue to be fed by an extensive system of original tunnels.

Siena’s distinctive Gothic style is illustrated by the quintessential Sienese arch, introduced to the city from the East during the Crusades. The arch dominated later building styles including the Renaissance era. Even when buildings underwent major renovations in the 17th, 18th and 19th centuries (such as the Town Hall, the Chigi-Saracini Palace, and the Marsili Palace respectively), Gothic elements had preference.

Siena is an outstanding medieval city that has preserved its character and quality to a remarkable degree. The city had substantial influence on art, architecture and town planning during the Middle Ages, both in Italy and elsewhere in Europe. The city is a masterwork of dedication and inventiveness in which the buildings have been designed to fit into the overall planned urban fabric and also to form a whole with the surrounding cultural landscape.

Criterion (i): Through its urban and architectural characteristics, the historic centre of Siena is a testimony to human creativity and expresses human artistic and aesthetic capacity in material form.

Criterion (ii): The strong, personal example of artistic civilization, its architecture, painting, sculpture and town planning in particular had a very strong cultural influence not merely on the whole territory of the Republic of Siena but also in Italy and Europe, especially between the 13th and 17th centuries.

Criterion (iv): The structure of the town and its evolution, uninterrupted over the centuries, along with a unity of design that has been preserved, has made Siena one of the most precious examples of the medieval and Renaissance Italian town.

The Historic Centre of Siena is delimited by its ancient ramparts constructed between the 14th and 16th centuries. These walls follow the contours of the three hills on which the city is built and continue to include their bastions, towers and gates. In addition to the walls, the property includes many other important original elements such as the fountains with their tunnels, the road network and green spaces related to the urban plan, the public buildings and the residences including palaces and towerhouses.

The Historic Centre of Siena is vulnerable to environmental pollution and intense tourist pressure, which strain city services during a few months of the year. There is also concern relating to the progressive abandonment of the historic core by local residents. Although the region was identified as earthquake-prone with a medium to low risk in 1983, current protection efforts are considered adequate.

Taking into account its present-day state of conservation and its historical authenticity, it has to be said that Siena is a rare example of a medieval historic town of this size. This can be explained in part by the fact that the city did not suffer serious war damage and has been spared from modern industrial development in part because it remains outside the country’s large development areas. The number of inhabitants has remained relatively low and corresponds with that of the medieval period. As a result, no large-scale urban extensions have been undertaken. The environs of the city have been subjected to only small-scale interventions, such as projects undertaken during the 19th century, which have become integral parts of its present historical authenticity. In contrast, similar activities have altered the historic fabric of other towns.

As a result of these factors, the original urban form of the city, with its 15th-century street plan, has been retained along with the Gothic design of its public buildings, palaces and towerhouses. Moreover, the function of medieval elements remains unchanged including the original vegetable gardens within the walls. Traditional activities continue in specific areas of the city as they did in the Middle Ages, as seen along Banchi di Sopra and Banchi di Sotto. These early streets were occupied by money changers and now are lined by banks.

Concern for authenticity of buildings and monuments has been identified in the removal of architectural elements that are threatened by pollution and their replacement with replicas.

The Historic Centre of Siena contains a variety of buildings under public, private and Church ownership. The property covers 107 hectares and is defined by the ancient city walls, which provide a clear boundary. The site is surrounded by a buffer zone of 9,907 hectares extending into the territory of the municipality.

Since 1931, Siena has adopted “modern” urban planning tools. Today, State and Municipal authorities are carrying out an active and continuous conservation and restoration policy. Recently, implementation tools for the municipal planning and relevant regulations, which introduce the definition of the old city “UNESCO Site”, have been approved. These tools recognize the need to maintain the city’s role as a representative place in terms of local identity. The historical centre is the focus of local identity, representing the economic activities and social expression of the community. The urban planning tools followed over time have maintained these functions while continuing to ensure the historical relationship of the walled city with the surrounding agricultural context.

The entire historic centre is subject to “Decreto Legislativo 42/2004, Codice dei beni culturali e del paesaggio”, the national Law for protection of cultural heritage. Individual monuments are subject to a safeguarding measure which ensures any activity on the site must be authorized by the relevant Soprintendenze (peripheral offices of the Ministry for Cultural Heritage and Activities). While the specific intervention authorizations are granted by the local authority, the role of the Soprintendenze is to ensure overall control. Under this regulation, the Soprintendenze can deny proposed modifications for conservation reasons and restrict interventions.

Another legislative limitation defined by the national law further protects the entire historic centre through the safeguarding of landscape. In addition, a series of more specific regulations and preservation plans regulate areas of building activity and commerce, and provide for a limited traffic zone with electronic control of access.

The Municipality of Siena approved its first management plan in May 2011 defining the management system. In particular, the plan defines how the goals are to be promoted and executed. Due to the articulation of the activities to be undertaken and the variety of critical issues to be resolved, a specific operational interdisciplinary structure (UNESCO office) will be created as a permanent unit devoted to coordination of all public and private bodies concerned with the actions of protection, conservation and enhancement of the Historic Centre of Siena. Strategic objectives, identified to meet the critical issues raised in the management plan, were transformed into five specific actions. A review has been undertaken of the type of communication relating to the values of the World Heritage property using an approach that integrates traditional techniques with contemporary approaches and tools. City parks are enhanced through a re-evaluation of public gardens to maintain the ancient relationship between the walled city and its surrounding green valleys. Studies and research have focused on both public and private heritage in order to optimize conservation practice. Additionally, the process of implementing further traffic regulation has included a parking system inside and outside the walls (already a limited traffic zone), with a policy to reduce and control vehicular access and provide a pedestrian and cycling plan for of the Historic Centre of Siena.

Activities that will increase tourist visitation to the World Heritage site have been optimized in accordance with the principles of sustainable development by implementing a management system to regulate the number of tourists.

Finally, with the unique support from “contrade”, the current urban planning safeguards the social and cultural aspects of the city through the promotion of a policy to recover the traditional residential use of buildings within the old town.