The List Palaces and Parks of Potsdam and Berlin
Print

With 500 ha of parks and 150 buildings constructed between 1730 and 1916, Potsdam's complex of palaces and parks forms an artistic whole, whose eclectic nature reinforces its sense of uniqueness. It extends into the district of Berlin-Zehlendorf, with the palaces and parks lining the banks of the River Havel and Lake Glienicke. Voltaire stayed at the Sans-Souci Palace, built under Frederick II between 1745 and 1747. 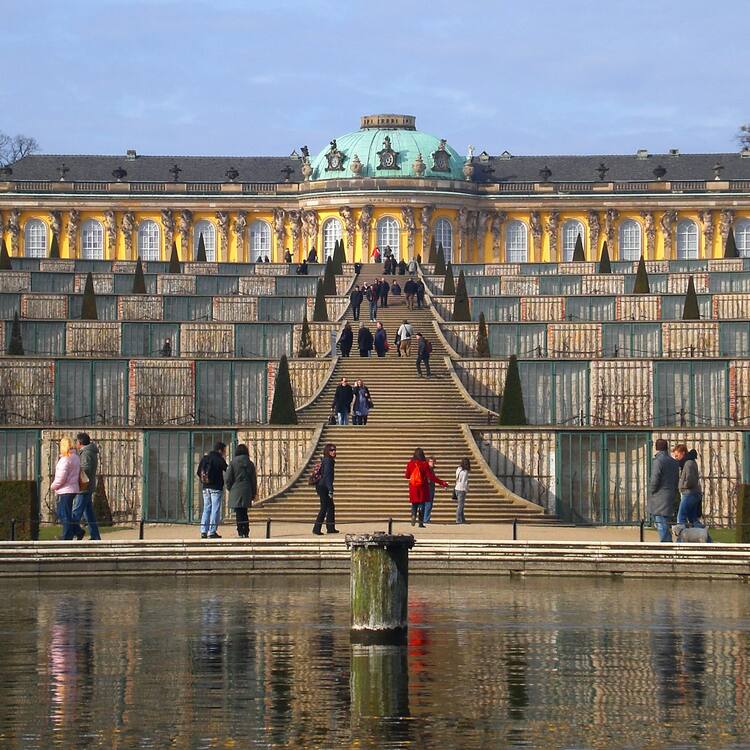 Palaces and Parks of Potsdam and Berlin © Silvan Rehfeld

The Palaces and Parks of Potsdam and Berlin (Sanssouci) represent a self-contained ensemble of architecture and landscape gardening in the 18th and 19th centuries. This ensemble, having an outstanding artistic rank, has its origin in the work of the most significant architects and landscape gardeners of their time in Northern Germany - G.W. von Knobelsdorff (1699-1753), C. von Gontard (1731-1791), C.G. Langhans (1732-1808), K.F. Schinkel (1781-1841), P.J. Lenné (1789-1866) and their co-operators. Together with highly imaginative sculptors, painters, craftsmen, building workers, and gardeners, they created Sanssouci, the New Garden, the Park of Babelsberg, and other grounds in the surrounding area of Potsdam as an overall work of art of high quality, European rank, and international standing.

The World Heritage property enfolds the Palaces and Parks of Potsdam and Berlin including buildings, parks, and designed spaces, which are intuitively, territorially and historically aligned with Sacrow Castle and Park and the Sauveur Church.

The cultural landscape with its parks and buildings was designed and constructed between 1730 and 1916 in a beautiful region of rivers, lakes, and hills. The underlying concept of Potsdam was carried out according to Peter Joseph Lenné’s plans, which he designed after the mid-1800s, to transform the Havel landscape into the cultural landscape it is today. These designs still determine the layout of Potsdam’s cultural landscape. The ensemble of parks of Potsdam is a cultural property of exceptional quality. It forms an artistic whole, whose eclectic nature reinforces its sense of uniqueness.

In Potsdam, the World Heritage property includes Sanssouci Park, the Lindenallee Avenue west of the New Palace, the Former Gardener’s Training School, former Railway Station of the Emperor and its environs, Lindstedt Palace and its low-lying surroundings, the Seekoppel paddock, the Avenue to Sanssouci, the Voltaireweg Avenue as a connection between Sanssouci Park and the New Garden, the New Garden, the so-called Mirbach Wäldchen Grove and the link between Pfingstberg Hill and the New Garden, the Villa Henkel with Garden, Pfingstberg Hill, the garden at the Villa Alexander, Babelsberg Park, the approaches to Babelsberg Park, the Babelsberg Observatory, Sacrow Park, the Royal Forest around the village of Sacrow, and the Russian colony Alexandrowka with the Kapellenberg, the artificial Italian village of Bornstedt and the artificial Swiss village in Klein-Glienicke. In Berlin, it includes Glienicke Park, Böttcherberg Hill with the Loggia Alexandra, the Glienicke Hunting Lodge, and the Peacock Island (including all buildings).

Criterion (i): The ensemble of the Palaces and Parks of Potsdam is an exceptional artistic achievement whose eclectic and evolutive features reinforce its uniqueness: from Knobelsdorff to Schinkel and from Eyserbeck to Lenné, a series of architectural and landscaping masterpieces have been built within a single space, illustrating opposing and reputedly irreconcilable styles without detracting from the harmony of a general composition that has been designed progressively over time. The beginning of the construction of Friedenskirche in 1845 is a symbol of deliberate historicism: this "Nazarene" pastiche of San Clemente Basilica in Rome commemorates the laying, on 14 April 1745, of the first stone for Sanssouci, the Rococo palace par excellence.

Criterion (ii): Potsdam-Sanssouci - frequently called the "Prussian Versailles" - is the crystallization of a great number of influences from Italy, England, Flanders, Paris, and Dresden. A synthesis of art trends in European cities and courts in the 18th century, the castle and the park offer new models that have greatly influenced the development of the monumental arts and the organization of space east of the Oder.

Criterion (iv): Potsdam-Sanssouci is an outstanding example of architectural creations and Landscaping development associated with the monarchic concept of power within Europe. By the vastness of the program, these royal ensembles belong to the very distinct category of princely residences, such as Würzburg and Blenheim (included on the World Heritage List in 1981 and 1987 respectively). The bombing of 14 April 1945 has made it impossible to nominate to the World Heritage List the urban ensemble developed by Frederick William I in two stages: the "first new town", from 1721 to 1725, and the "second new town", beginning in 1733.

The Palaces and Gardens in Potsdam and Berlin include all elements necessary to express the Outstanding Universal Value of the Prussian residence landscape. It is of adequate size to ensure the features and processes, which convey the significance of the property.

The history occurring between 1939 and 1989 left its mark on the Potsdam property through neglect, collective re-use of buildings, and the construction of military facilities, though the layout still follows Lenné’s plan.

The policies of the Federal States of Brandenburg and Berlin, the City of Potsdam, and the Prussian Palaces and Gardens Foundation Berlin-Brandenburg are aimed at restoring the property, based on extensive historical research and emphasizing the historical structure and layout of the planned landscape, while forming the framework for new environmental and urban developments. This guarantees conscientious and responsible restoration and renovation. Partial reconstruction does occur at times, but this is also based on intensive preliminary studies and research.

The entire territory is classified as a monumental area according to the Brandenburg State Law on the Protection of Monuments, dated 24 May 2004, and is protected by the Statutes for the Protection of the Monumental District of the Berlin-Potsdam cultural landscape according to the UNESCO World Heritage List, administrational district of Potsdam Monumental Districts Statutes dated 30 October 1996.

Conservation and construction issues are organised and managed in close cooperation between the Prussian Palaces and Gardens Foundation Berlin-Brandenburg, the City of Potsdam, the two State Offices for Historic Monuments (Brandenburg and Berlin), the Ministry for Science, Research, and Culture, and the Senate Department for Urban Development and the Environment of Berlin.

The property is managed under the responsibility of the SPSG, the City of Potsdam, and the districts of Berlin. The City of Potsdam has further designated a local site coordinator for the area of the property located within its administrative responsibility. The SPSG has detailed documentation (photographs, measurements/surveys, maps) on all park components. The SPSG has a Monuments Committee (art-historians, architects, engineers, restorers, conservators, landscape-architects) to consider fundamental measures concerning such matters as restoration issues. 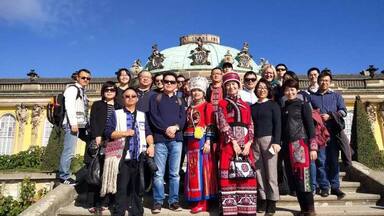 play_arrow Palaces and Parks of Potsdam and Berlin (UNESCO/NHK)