The fortified walls, barbed wire, platforms, barracks, gallows, gas chambers and cremation ovens show the conditions within which the Nazi genocide took place in the former concentration and extermination camp of Auschwitz-Birkenau, the largest in the Third Reich. According to historical investigations, 1.5 million people, among them a great number of Jews, were systematically starved, tortured and murdered in this camp, the symbol of humanity's cruelty to its fellow human beings in the 20th century. 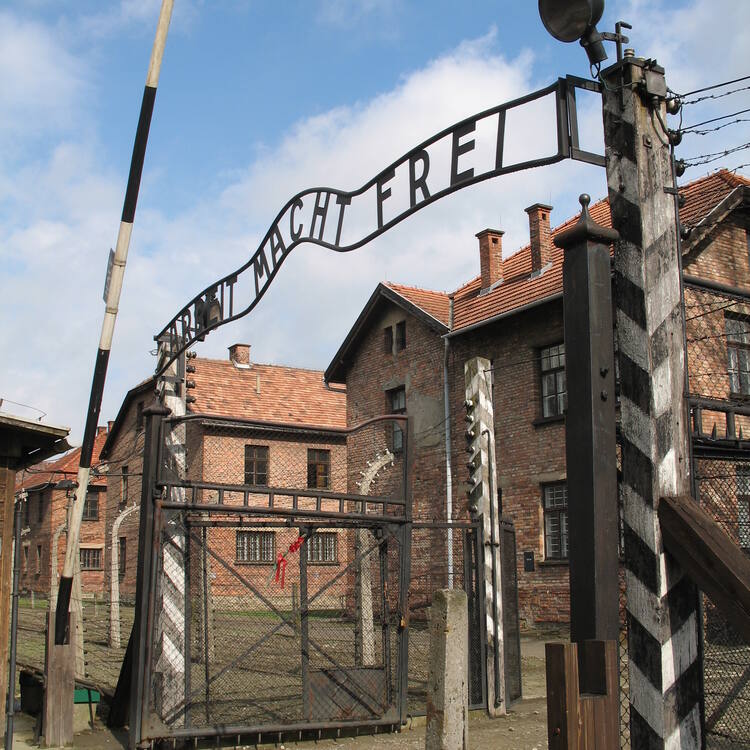 Entrance of Auschwitz I © Nathalie Valanchon

Auschwitz Birkenau was the principal and most notorious of the six concentration and extermination camps established by Nazi Germany to implement its Final Solution policy which had as its aim the mass murder of the Jewish people in Europe. Built in Poland under Nazi German occupation initially as a concentration camp for Poles and later for Soviet prisoners of war, it soon became a prison for a number of other nationalities. Between the years 1942-1944 it became the main mass extermination camp where Jews were tortured and killed for their so-called racial origins. In addition to the mass murder of well over a million Jewish men, women and children, and tens of thousands of Polish victims, Auschwitz also served as a camp for the racial murder of thousands of Roma and Sinti and prisoners of several European nationalities.

The Nazi policy of spoliation, degradation and extermination of the Jews was rooted in a racist and anti-Semitic ideology propagated by the Third Reich.

Auschwitz Birkenau was the largest of the concentration camp complexes created by the Nazi German regime and was the one which combined extermination with forced labour. At the centre of a huge landscape of human exploitation and suffering, the remains of the two camps of Auschwitz I and Auschwitz II-Birkenau were inscribed on the World Heritage List as evidence of this inhumane, cruel and methodical effort to deny human dignity to groups considered inferior, leading to their systematic murder. The camps are a vivid testimony to the murderous nature of the anti-Semitic and racist Nazi policy that brought about the annihilation of over one million people in the crematoria, 90% of whom were Jews.

The fortified walls, barbed wire, railway sidings, platforms, barracks, gallows, gas chambers and crematoria at Auschwitz Birkenau show clearly how the Holocaust, as well as the Nazi German policy of mass murder and forced labour took place. The collections at the site preserve the evidence of those who were premeditatedly murdered, as well as presenting the systematic mechanism by which this was done. The personal items in the collections are testimony to the lives of the victims before they were brought to the extermination camps, as well as to the cynical use of their possessions and remains. The site and its landscape have high levels of authenticity and integrity since the original evidence has been carefully conserved without any unnecessary restoration.

Criterion (vi): Auschwitz Birkenau, monument to the deliberate genocide of the Jews by the German Nazi regime and to the deaths of countless others, bears irrefutable evidence to one of the greatest crimes ever perpetrated against humanity. It is also a monument to the strength of the human spirit which in appalling conditions of adversity resisted the efforts of the German Nazi regime to suppress freedom and free thought and to wipe out whole races. The site is a key place of memory for the whole of humankind for the Holocaust, racist policies and barbarism; it is a place of our collective memory of this dark chapter in the history of humanity, of transmission to younger generations and a sign of warning of the many threats and tragic consequences of extreme ideologies and denial of human dignity.

Within the 191.97-ha serial property – which consists of three component parts: the former Auschwitz I camp, the former Auschwitz II-Birkenau camp and a mass grave of inmates – are located the most important structures related to the exceptional events that took place here and that bear testimony to their significance to humanity. It is the most representative part of the Auschwitz complex, which consisted of nearly 50 camps and sub-camps.

The Auschwitz Birkenau camp complex comprises 155 brick and wooden structures (57 in Auschwitz and 98 in Birkenau) and about 300 ruins. There are also ruins of gas chambers and crematoria in Birkenau, which were dynamited in January 1945. The overall length of fencing supported by concrete poles is more than 13 km. Individual structures of high historical significance, such as railway sidings and ramps, food stores and industrial buildings, are dispersed in the immediate setting of the property. These structures, along with traces in the landscape, remain poignant testimonies to this tragic history.

The Auschwitz I main camp was a place of extermination, effected mainly by depriving people of elementary living conditions. It was also a centre for immediate extermination. Here were located the offices of the camp’s administration, the local garrison commander and the commandant of Auschwitz I, the seat of the central offices of the political department, and the prisoner labour department. Here too were the main supply stores, workshops and Schutzstaffel (SS) companies. Work in these administrative and economic units and companies was the main form of forced labour for the inmates in this camp.

Birkenau was the largest camp in the Auschwitz complex. It became primarily a centre for the mass murder of Jews brought there for extermination, and of Roma and Sinti prisoners during its final period. Sick prisoners and those selected for death from the whole Auschwitz complex – and, to a smaller extent, from other camps – were also gathered and systematically killed here. It ultimately became a place for the concentration of prisoners before they were transferred inside the Third Reich to work for German industry. Most of the victims of the Auschwitz complex, probably about 90%, were killed in the Birkenau camp.

The property is of adequate size to ensure the complete representation of the features and processes that convey its significance. Potential threats to the integrity of the property include the difficulty in preserving the memory of the events and their significance to humanity. In the physical sphere, significant potential threats include natural decay of the former camps’ fabric; environmental factors, including the risk of flooding and rising groundwater level; changes in the surroundings of the former camps; and intensive visitor traffic.

The Auschwitz camp complex has survived largely unchanged since its liberation in January 1945. The remaining camp buildings, structures and infrastructure are a silent witness to history, bearing testimony of the crime of genocide committed by the German Nazis. They are an inseparable part of a death factory organized with precision and ruthless consistency. The attributes that sustain the Outstanding Universal Value of the property are truthfully and credibly expressed, and fully convey the value of the property.

At Auschwitz I, the majority of the complex has remained intact. The architecture of the camp consisted mostly of pre-existing buildings converted by the Nazis to serve new functions. The preserved architecture, spaces and layout still recall the historical functions of the individual elements in their entirety. The interiors of some of the buildings have been modified to adapt them to commemorative purposes, but the external façades of these buildings remain unchanged.

In Birkenau, which was built anew on the site of a displaced village, only a small number of historic buildings have survived. Due to the method used in constructing those buildings, planned as temporary structures and erected in a hurry using demolition materials, the natural degradation processes have been accelerating. All efforts are nevertheless being taken to preserve them, strengthen their original fabric and protect them from decay.

Many historic artefacts from the camp and its inmates have survived and are currently kept in storage. Some are exhibited in the Auschwitz-Birkenau State Museum. These include personal items brought by the deportees, as well as authentic documents and preserved photographs, complemented with post-war testimonies of the survivors.

The property is protected by Polish law under the provisions of heritage protection and spatial planning laws, together with the provisions of local law. The site, buildings and relics of the former Auschwitz Birkenau camp are situated on the premises of the Auschwitz-Birkenau State Museum, which operates under a number of legal Acts concerning the operation of museums and protection of the Former Nazi Extermination Camps, which provide that the protection of these sites is a public objective, and its fulfilment is the responsibility of the State administration. The Auschwitz-Birkenau State Museum is a State cultural institution supervised directly by the Minister of Culture and National Heritage, who ensures the necessary financing for its functioning and the fulfillment of its mission, including educational activities to understand the tragedy of the Holocaust and the need to prevent similar threats today and in future. The Museum has undertaken a long-term programme of conservation measures under its Global Conservation Plan. It is financed largely through funds from the Auschwitz-Birkenau Foundation, which is supported by states from around the world, as well as by businesses and private individuals. The Foundation has also obtained a State subsidy to supplement the Perpetual Fund (Act of 18 August 2011 on a Subsidy for the Auschwitz-Birkenau Foundation Intended to Supplement the Perpetual Fund).

The existing legal system provides appropriate tools for the effective protection and management of the property. The Museum Council, whose members are appointed by the Minister of Culture and National Heritage, supervises the performance of the Museum’s duties regarding its collections, in particular the execution of its statutory tasks. In addition, the International Auschwitz Council acts as a consultative and advisory body to the Prime Minister of the Republic of Poland on the protection and management of the site of the former Auschwitz Birkenau camp and other places of extermination and former concentration camps situated within the present territory of Poland.

Several protective zones surround components of the World Heritage property and function de facto as buffer zones. They are covered by local spatial development plans, which are consulted by the Regional Monuments Inspector. The management of the property’s setting is the responsibility of the local government of the Town and Commune of Oświęcim. For better management and protection of the attributes of the Outstanding Universal Value of the property, especially for the proper protection of its setting, a relevant management plan must be put into force. 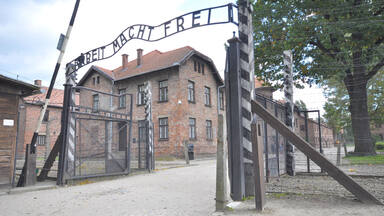 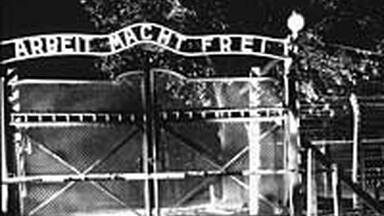