The List Roman Theatre and its Surroundings and the ...
Print

Situated in the Rhone valley, the ancient theatre of Orange, with its 103-m-long facade, is one of the best preserved of all the great Roman theatres. Built between A.D. 10 and 25, the Roman arch is one of the most beautiful and interesting surviving examples of a provincial triumphal arch from the reign of Augustus. It is decorated with low reliefs commemorating the establishment of the Pax Romana. 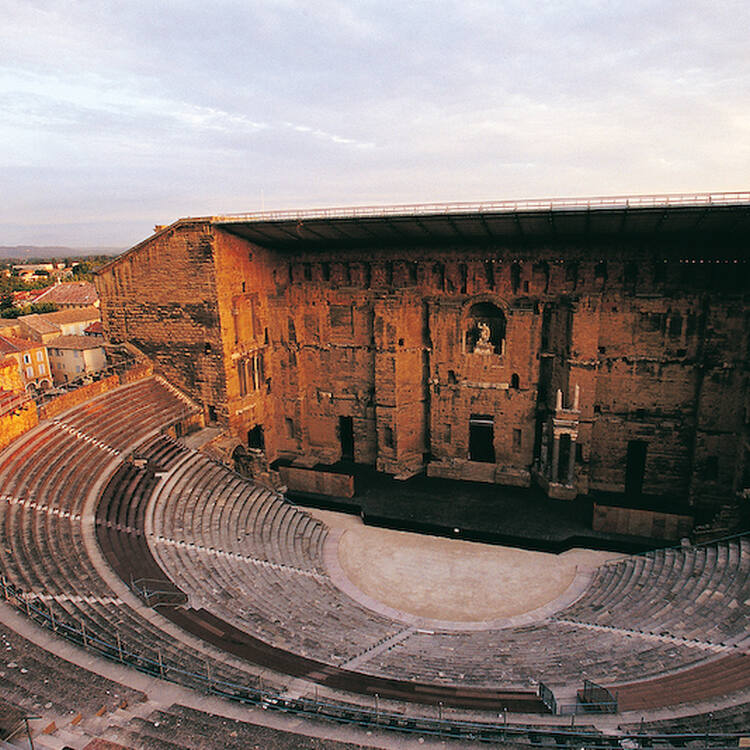 Situated in the Rhône Valley, in the Provence-Alpes-Côte-d'Azur region, the ancient theatre of Orange, with its 103 m long and 37 m high facade, is one of the best preserved of all the great Roman theatres. Built in the beginning of the Christian era, the ancient theatre presents all the components of the Latin Theatre according to Vitruvius: the cavea (semicircular tiers), the lateral accesses and the surprisingly preserved stage wall flanked by parascenia. Columns and numerous statues in niches originally decorated the stage. Only a few vestiges remain of this original decoration, including the statue of Augustus displaced to the large central niche. Closed by Imperial decree in 391, the theatre was abandoned and, later, ransacked and looted by Barbarians. It was not until the 19th century that the ancient theatre was reborn thanks to the restoration work begun in 1825. Built between 10 and 25 AD, the Roman Triumphal arch of Orange is one of the most beautiful and interesting provincial triumphal arches of the Augustan Age that has come down to us, thanks to its low reliefs commemorating the establishment of the Pax Romana. On its north and south sides, Celtic weapons from the period of independence appear in fan shape on a wall; on its east and west sides, the Celts are represented in chains. In addition to this decoration, there are naval remains where prows, oars, anchors and aplustre, recall the control over the maritime world that the victory of Actium gave to Rome. Finally, on the upper attic, Roman and Celtic cavalrymen and infantrymen clash. Transformed into a fort in the 13th century, partially repaired in the 18th century, then restored in the 19th century, the Triumphal Arch of Orange remains one of the most remarkable monuments of Roman Gaul.

Criterion (iii): From the Augustan Age, the ancient Theatre of Orange is an exceptional example in the typology of Roman theatres.

Criterion (vi): The events referred to in the low reliefs carved on the north face of the Triumphal Arch of Orange (war against the Barbarians and establishment of the Pax Romana) are of universal significance.

The property includes the entire Saint-Eutrope Hill which the theatre backs up against and where the known vestiges of the religious complex to which it belonged are located. The theatre, like these vestiges, and like the triumphal arch, are no longer in their original state. This is generally the case with ancient vestiges, but the elements preserved are spectacular and sufficient to demonstrate the value of the property.

The Roman monuments of Orange have come down to us as a result of several processes of appropriation that have adapted or transformed these buildings for other uses over the centuries. The triumphal arch was restored in 1824, one of the oldest interventions of this kind in France. From the 19th century onwards, clearing and restoration campaigns made it possible to consolidate these monuments. The additions made – among others those that restored the theatre to its former use - respected the ancient substance.

The ancient theatre and the archaeological site bordering it have been listed as historic monuments since 1840. The specific features of their protection derive from the Heritage Code.  All work on historic monuments is subject to authorisation from the regional prefect after advice from the regional curator of historic monuments. In addition, these historic monuments generate protective perimeters in which all work is subject to authorisation by the architect of the Bâtiments de France. The buffer zone currently complies to these 500-metre limits. A Declaration of an Outstanding Heritage Site currently being drawn up will in the future allow the protection to be strengthened in an enlarged buffer zone. The St. Eutrope Hill has double protection as a historic monument: listing in 1919 and inscription in 1995.  It has been a listed site under the Environmental Code since 1935. Work authorisations are subject to ministerial authorisations.  The overall management is the responsibility of the city of Orange, the owner, and the State, which provides expertise and scientific and technical monitoring. The cultural events held in the ancient theatre are subject to strict controls to prevent any degradation. The work carried out to redevelop the Place de l’Arc de Triomphe made it possible to move the road away from the monument and improve pedestrian access. This development has received the approval of the National Commission for Heritage and Architecture.The property has a management plan which is regularly updated. The strengthening of consultation between the city of Orange and the State is an indispensable element in the long-term management of the Ancient Theatre and its surroundings and the “Triumphal Arch” of Orange.