The village of Ninstints (Nans Dins) is located on a small island off the west coast of the Queen Charlotte Islands (Haida Gwaii). Remains of houses, together with carved mortuary and memorial poles, illustrate the Haida people's art and way of life. The site commemorates the living culture of the Haida people and their relationship to the land and sea, and offers a visual key to their oral traditions. 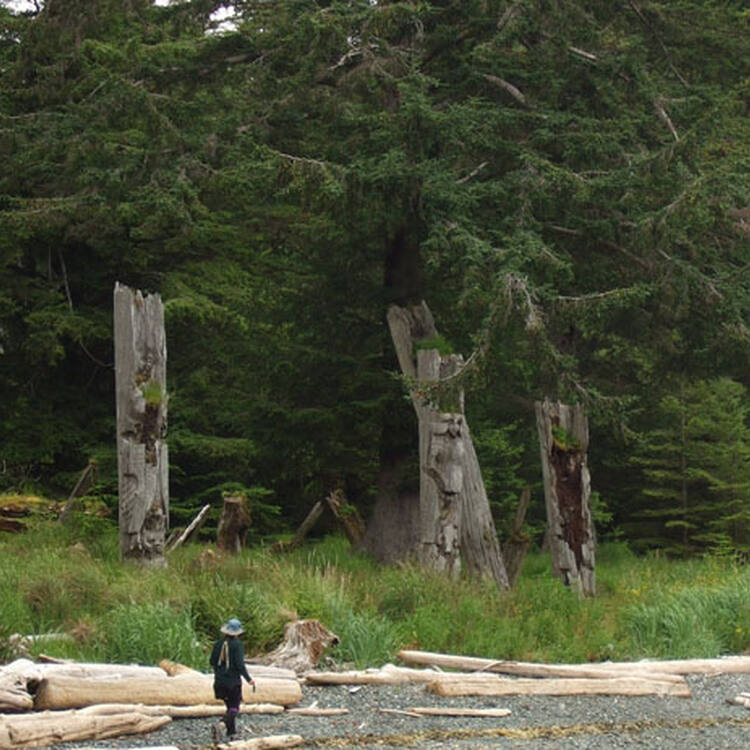 On the island of SG̱ang Gwaay, the remains of large cedar long houses, together with a number of carved mortuary and memorial poles at the village of SG̱ang Gwaay Llnagaay (formerly Nan Sdins), illustrate the art and way of life of the Haida. The property commemorates the living culture of the Haidaand their relationship with the land and sea. It also offers a visual key to their oral traditions. The village of SG̱ang Gwaay was occupied until shortly after 1880. What survives is unique in the world, a 19th-century Haida village where the ruins of houses and memorial or mortuary poles illustrate the power and artistry of Haida society.

Criterion (iii): SG̱ang Gwaay bears unique testimony to the culture of the Haida. The art represented by the carved poles at SG̱ang Gwaay Llnagaay (Nan Sdins) is recognized to be among the finest examples of its type in the world.

The property is wholly contained within the natural boundaries of the island on which all remains are located, thus ensuring the complete representation of the features and processes that convey the property’s significance. There is some degradation of the ruins and mortuary poles due to natural processes, but the property is protected from adverse effects of human development and invasive species. There has been no permanent settlement on the property since the early 19th century.

SG̱ang Gwaay is unquestionably authentic in terms of its location and setting, forms and designs, materials and substances as well as spirit and feeling. The property is an authentic illustration of the evolving Haida culture, as can be seen in the relationships between the forms and designs of the art and structures at the property, and contemporary Haida art. The property continues to hold significant spiritual value for the Haida and is still used today.

After consultation with chiefs and elders, in 1995 four poles were straightened and stabilized and in 1997 an additional pole was stabilized in an effort to prolong the period before they return naturally to the earth. Identified and potential threats to the authenticity of the property include the general decomposition of the cedar poles and house remains, the impact of deer on the in-situ artefacts (the situation is reviewed on a regular basis and culling happens as required), and unsupervised visitors who may inadvertently damage the fragile cultural resources by touching or walking on them.

An Archipelago Management Board (AMB), comprised of Haida and Government of Canada representatives, determines all operational, planning and management actions, using a consensus-based decision-making model. The AMB examines all initiatives and undertakings related to the planning, operation, and management of SG̱ang Gwaay. The Haida Hereditary Leaders have moral authority over the village sites and are consulted; solutions are based on advice provided by the Haida Hereditary Leaders. The Haida Gwaii Watchmen Program of site guardians and guides is managed by the Skidegate Band Council and is an essential part of the management structure.

Special attention will be given over the long term to monitoring and taking appropriate actions related to a number of factors in and near the property. Specifically, these include the following: potential impacts of climate change; potential building development; marine pollution; local conditions affecting physical fabric including wind, humidity, and temperature; impacts of tourism, visitation and recreational activities; deliberate destruction of heritage; effects of climate change and severe weather; possible sudden ecological and geological events; and invasive species.